In my mother’s house, there was a small placard stuck to the fridge near the breakfast nook. It was one of those silly magnets mom had probably picked up at Target a long time back, you know, before Y2K might have destroyed the world as we know it. A notion really, the placard was inscribed with one of those quasi-wise sayings that, along with our mother’s penchant for feeding all the neighborhood cats, spoke more about mom’s philosophy of life than she’d ever care to admit. The placard read:

“Insanity does not run in my family, rather it strolls through taking its time, getting to know everyone personally.”[1]

Now, I never paid a lot of attention to the placard, or its words. I always assumed it was just a funny ha-ha item that mom had posted in the kitchen for any of us naysayers to read as we made our way through to more important places like the actual refrigerator. I figured that any true familial insanity was, well, far beyond the scope of our own nondescript little bloodlines. After all, insanity is something for other people, right? Oh, sure, we’d probably had some good old “romantic insanity” somewhere back in the day, but even that surely had to be many generations removed from us. You know, like the mad duke who fell in love with a farm girl and took her away to the South Seas? Nah, insanity’s fickle quill wouldn’t have dared to mark us in any other way than this… Yeah, right.

Oh, sure, we’d probably had some good old “romantic insanity” somewhere back in the day, but even that surely had to be many generations removed from us.

Now, my mother’s family: well, they were the Jedi masters of keeping secrets.[2] Their familial sequestering of the truth has always been problematic for me, as, like most of us here, I am wont to shake out any “loose change” from the old family tree. But I have to tell you, I really didn’t even go looking for it – for insanity that is; instead, it decided to come looking for me. (Hey, no wise cracks … please!) You see, while endeavoring to take a closer look at the lives (and secrets!) of the siblings of my great-grandfather, Samuel Silas Sage, insanity stumbled upon me.[3] The truth is, I’d been so vain and full of myself that I hadn’t bothered to take a closer look at one of Sam’s brothers, one John P.H. Sage.[4] And, yes, there it was – insanity.

Hey, now, I’m not a total loser – I mean, I had recorded most of Uncle John’s vitals, but I must admit I had sort of skipped past the whole of his life, relying too heavily on Genealogical Record of the Descendants of David Sage… in looking for old Uncle John.[5] (Sorry, Alicia!) I mean after all, John P.H. Sage wasn’t so far removed from us – so, surely, if there was any notable issue worth recalling – somebody would have said something, right? Or would they? I resolved that I needed to take a closer look.

Right off the bat there was an issue with old Uncle Johnny Sage.

Right off the bat there was an issue with old Uncle Johnny Sage. Could I be seeing his residence correctly? The U.S. Federal Census Record (1910) showed “John Sage” living at the Colorado State Insane Asylum? Okay, so maybe 1910 was a tough year – we’ve all have bad years, right? Maybe Uncle John was just a little down on his luck. Heck, everybody went into the “insane asylum” for literally everything in those days. It was like an Airbnb or a home away from home.[6] No worries! Let’s see what Johnny’s up to in 1920 and 1930. (Uh-oh, no change….) Yikes! Maybe I have the wrong “John Sage?”

So I took a look further back… (It’s what we do, huh?) But old Johnny Sage had gone missing in 1900 – truant from his wife and kids. This is never a good sign. His wife, the possibly quite amiable Sarah (Rishling) Sage, is enumerated as a “widowed” head of household living with her two sons, one from a previous “relationship,” and one, the heir apparent of my Uncle John Sage.[7] (It always sucks when a woman felt compelled to claim “widowed” on the census to placate society over a crazy husband.) Still, just maybe I have the wrong John Sage?

Nope – no such luck. A quick look at John and Sarah’s marriage record tells me I have the right guy.[8] Dang it, so much for the mad duke running away with the farm girl to the South Seas. But, Johnny, just what the heck did you do? So I took a stroll down memory lane, and returned to one of my favorite places, the Colorado Historic Newspapers Collection, to see if maybe they might tell me a little bit more about what had happened to John Sage. 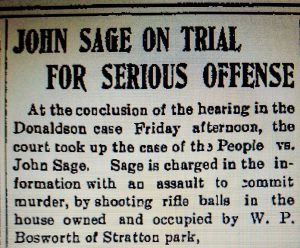 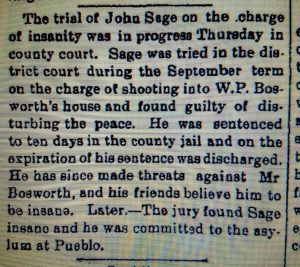 Well, there’s nothing like one’s name in bold type newsprint! Never let it be said that when my family “does insane,” well, that they go big or they don’t go home. (No pun intended.) But there was old John in the newspapers on trial for assault to commit murder.[9] The sad part (for me) here is that John just seems to have totally lost it – firing a gun into someone’s home –  someone that he appears to have possibly concocted a grudge against – and perhaps against someone he didn’t even know all that well. And by this, through a jury of his peers, John Sage lets himself become one of the very definitions of insanity.[10]

So I guess I’ve learned that no family is excluded from the insanity factor; indeed, that it may lurk a bit more closely than what we might otherwise prefer. I’ve also learned, too, that the siblings of those older generations (and those not so far removed) really do tell a very full story. And, yes, I’ve learned to not just accept “by rote” the listing of vital records that may or may not tell too much of their story. In the end I don’t know what more to think about John Sage – a great-uncle who would have been a contemporary of Sage family members I knew growing up. Perhaps if they hadn’t been so masterful at keeping secrets, well, maybe we might have at least been able to understand something more about the life of John Sage. But, hey, in this family, insanity or not, when it comes to keeping secrets … we are nothing if not Jedi masters.

27 thoughts on “A troubled Sage”