Sarah Dery, who lives in Concord, is the Research and Library Manager at American Ancestors/NEHGS; she has been with the Society since 2017. She supports the researchers and genealogists on the Research and Library teams, managing correspondence with constituents, organizing research information, and applying her genealogical knowledge in assisting our clients – both in-person and digitally. Sarah is a graduate of Rhode Island College in Providence and has a B.A. in anthropology and English Literature. Her interest in anthropology stems from her participation in a week-long archaeology dig at James Madison’s Montpelier in Virginia. Her family ancestry and expertise include Rhode Island, Connecticut, and French-Canada. View all posts by Sarah Dery →

Online genealogical websites like AmericanAncestors.org, Ancestry.com, and FamiliySearch.org can be extremely helpful when researching your family tree. But what do you do when your search comes up empty, and you don’t have unlimited resources to travel in-person to your ancestor town? Sending emails, calling, and filling out inquiry forms for town libraries, historical societies, and local clerks’ offices may be the needed extra step in finding your ancestors.

This past month, we released research on Associate Justice Ketanji Brown Jackson’s ancestry, about 50% of which was conducted with “on the ground” help in Georgia. After fully exhausting records online, we had to turn our attention to collections that may only be available at the town and county levels. END_OF_DOCUMENT_TOKEN_TO_BE_REPLACED 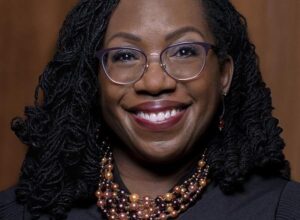 History was made on Thursday, 7 April 2022, when the Senate confirmed Judge Ketanji Brown Jackson as the 116th associate justice of the Supreme Court. She will be the first Black woman and the first public defender to serve on the court. Several months later, on Thursday, 30 June 2022, Judge Jackson took the oath as the newest associate justice on the Supreme Court.[1] END_OF_DOCUMENT_TOKEN_TO_BE_REPLACED

Prior to my career at American Ancestors, I worked at the living history museum called Plimoth Plantation (now referred to as Plimoth Patuxet). For five years, I had the remarkable opportunity of learning and telling the story of the Pilgrims and Wampanoag Natives. I first started in the Group Sales Office, where we assisted school and tour groups with their planned visits to Plimoth Plantation. Throughout the fall season, we could accommodate up to 2,500 children per day. After about a year, I was promoted to work in the Education department and was responsible for scheduling all the programs offered through the interpretation staff – off-site classroom visits, workshops, overnights at Plimoth Plantation, and summer and winter day camps. In this role, I learned to love the seventeenth century. END_OF_DOCUMENT_TOKEN_TO_BE_REPLACED

Joseph Kenny was a soldier in the 169th infantry, 43rd Infantry Division, during the Second World War. He was born in 1910 in Rhode Island, one of the nine children of Michael and Catherine (Mangan) Kenny – both Irish immigrants. My great-uncle Joseph died on 11 August 1944 in the Philippine Islands.

He was stationed at Fort William McKinley. Although we don’t know much about how Joseph died in combat, we do know a lot about the after effects of his death from the telegrams and letters written by the Kenny family to the Army for more than a year – all trying to learn about Joseph’s last days on Earth.  END_OF_DOCUMENT_TOKEN_TO_BE_REPLACED

As we mark Veterans Day, I think of my ancestors who fought for our country. During my family search, I found that most of my ancestors didn’t arrive to the United States until 1870; we don’t have any early American soldiers in our family tree who fought in the American Revolution or World War I. I do have two great-uncles, on my paternal side, who were in the military during World War II. These two men are the individuals I want to honor this Veterans Day.

My grandfather, Leo Napoleon Dery, had a brother named Gerard Ovila Dery who was born in 1920. Gerard, pictured in uniform, enlisted on 2 February 1942 at the age of 22 and was stationed at Fort Benning in Georgia. END_OF_DOCUMENT_TOKEN_TO_BE_REPLACED

We all have fond memories of growing up with family around us. As we age, family members pass on, but our memories stay strong – often we find ourselves reminiscing around the holidays. Halloween is one of those holidays that we never grow too old to celebrate!

I grew up in a large neighborhood from the time I was two years old until I graduated from high school. There were always kids around to play with – in fact, I’m still great friends with those same kids! Like most neighborhoods in Massachusetts at that time, we always had a place to go trick-or-treating that was safe and close-by. We had the house playing creepy music, the house that gave out king-size candy bars (my Dad worked for Nestle!), and even a neighbor who would hide in his front bushes to jump out and scare us at the right moment. END_OF_DOCUMENT_TOKEN_TO_BE_REPLACED

I recently read a book by Ellen Marie Wiseman entitled What She Left Behind. Among other themes in the book, it depicted the treatment of a woman who was committed to an asylum in early 1920 by her father. The main character was committed because she reacted strongly to a marriage arranged by her parents; she displayed outbursts of emotion. The author of What She Left Behind describes the conditions in an asylum based on the Willard Asylum in Ovid, New York, during the early twentieth century. Often, when I’m reading fiction, I think about my family tree and those living during the years in which the novel takes place. Were there individuals in my own family tree who “went mad” or were sent to live in an asylum? Were these episodes recognized as depression or mental illness; or was a person abandoned, without family to care for them and, thus, committed? END_OF_DOCUMENT_TOKEN_TO_BE_REPLACED

With the genealogy that I’ve completed so far on my family, I have found that I am French – so French! I have one great-grandparent from Roscommon, Ireland, but the rest of my family, as far back as I can research, is French. My maternal family originated in Meaux, France, while my paternal family came from Paris. Both sides emigrated to Quebec, Canada in the mid-1600s among the early settlers of New France.

As someone who has researched the history of the Mayflower passengers for her job, I am familiar with the excitement and honor of being related to an early settler. According to the American-French Genealogical Society website,  most people who can trace their ancestry to Canada are descended from one of the 800 women who settled there as part of a program that began in 1663. This program was called “les Filles du Roi,” or “the King’s Daughters.” END_OF_DOCUMENT_TOKEN_TO_BE_REPLACED

One thing that we can all agree on is that New England weather always keeps us guessing! In a matter of days, the Boston area saw a “bomb-cyclone” drop over a foot of snow, lower than normal temperatures for consecutive days, as well as a stretch of 60-degree weather. As we celebrate a new year, I’m beginning to wonder about the weather conditions when the Mayflower passengers landed. What did they encounter? What did they expect?

We know that the passengers were not prepared for the New England weather, as many perished during the first winter (nearly half died). I am brought to Edward Winslow’s Good Newes from New England,[1] where in 1623 he states: END_OF_DOCUMENT_TOKEN_TO_BE_REPLACED

Over the next few years, you’ll hear more and more about the 400th anniversary of the Puritans and Separatists who sailed on Mayflower in 1620. We know them as “The Pilgrims.” In 1620, the Pilgrims landed at Plymouth in Massachusetts Bay, where they found harsh weather, an unfamiliar land, and where they were responsible for the care of (initially) 102 people in their new Colony.

William Bradford, the Governor of Plymouth Colony, is one of the few individuals who documented his life in the early years of the settlement. Governor Bradford was the longest-serving governor of the colony and is well known for his book, Of Plymouth Plantation, written between 1630 and 1651. END_OF_DOCUMENT_TOKEN_TO_BE_REPLACED