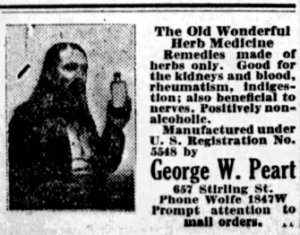 The rasp of her son’s cough hadn’t stopped for a fortnight, and it seemed (as Mrs. Hatton would later write) that there was “no medicine on earth that could reach his disease.”[1] It was terrible to watch him wasting in his struggles. There certainly was no ease or comfort for the boy. There appeared to be no cure.

The doctors the Hattons had called upon at Baltimore lauded the Playfair method for flushing his lungs.[2] Good Lord, his mother had thought, he is but two years old!

It was such a new and unthinkable risk. (She was also embarrassed that such a procedure, even one so promising, was well beyond their means.) What else could she do? Was there anything that might save her boy’s life? She had to look further. She had to try. It was, after all, 1915.

How glad she and Mr. Hatton had been to see Peart’s advertisements.[3] How blessed and fortunate! Even more, how glad they’d been to have met with Peart himself, and receive his reassurances that the natural properties of his elixirs were just what their boy needed. While the price Peart had charged for his medicines had stretched their budget, it was a fraction of what those Baltimore doctors had wanted for their own monstrous set of cures. Perhaps there were still good-hearted and well-meaning people in this world, after all?

Touted by ‘The Reverend George Washington Peart,’ the elixirs were said to cure all sorts of croup and grippe. They had seen the other testimonials, and she felt quite certain Peart was a saintly man. Yes, she and Mr. Hatton had of course heard the rumors about Peart’s troubles with the authorities.[4] Still, they were mindful people who were respectful and looked the other way. Surely, all of God’s creatures were entitled to redress past mistakes? After all, Peart had registered his elixir with the government![5] Would a more troublesome or dishonest soul have bothered?

After all, Peart had registered his elixir with the government!

They’d all wondered about the small bottles that arrived soon after. It had seemed odd that such divine and costly elixirs should have been delivered by nothing but a raggamuffin courier. Still, as the boy’s cough continued, and the tempting liquids glistened in their enigmatic jars, she couldn’t help but feel some fraction of hope. Its scent had wafted thick and earthy that day. As she freed the liquid from its seal, and the whoosh! of its contents filled the room for him to sip, she thought, well, just maybe… 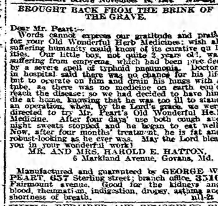 Then, after just a few short months of sipping Peart’s remedy, their boy had come back to them. Mrs. Hatton wasn’t certain, but it had to have been “the medicine” contained in that elixir. Whatever had occurred it was nothing short of a miracle. Now their boy was growing quite “fat and robust.” It was a simple proof that all it took was a little faith and hope to bring someone back from near death; that and, of course Peart’s Old Wonderful Herb Medicines. She realized she’d be remiss not to take a moment to write and thank him…

Some of the best games of genealogical Clue are found when that “out-of-the-ordinary” character happens to shake out of the family tree. In this instance, the guy who fell out of Ye Olde Branches was one George Washington Peart, a first cousin of my great-grandfather’s. I found “George” (as I like to call him) while trying to interpret the life experiences of George’s mother, Leah Ricketts. Seriously, how could anyone who at various points in life was called “Reverend,” “Doctor,” “Medicine Man,” and John the Baptist not catch your eye?[6]

A veritable Clark Stanley[7] – with a touch of P.T. Barnum – “George” was born to Leah (and presumably her second husband William Peart) in Dorchester County, Maryland in July 1867. He married early on Mary Wright, and the couple is shown raising seven of their fifteen children in Philadelphia, where George is reporting himself as a carpenter, in 1900. Life looks pretty normal for George. His children attend school, and he and Mary frequent a local church. At this point in George’s tale, though, something must have gone awry.

Shortly after the turn of the twentieth century, George and Mary moved the family to Baltimore. Here George juggles life and occupation(s) between Baltimore and Wilmington, Delaware. Doubtless, he was looking for work to support his hungry and ever-growing brood. Oddly enough, city directories of the time have started to list his occupation as a “nurseryman,” an occupation that would “grow” in its significance to his story.[8] George and his kids are starting to have minor skirmishes with the law, and one gets the impression that he and Mary might be having difficulties in “keeping it all together.” By 1906, George, in an ambitious move, manages to “fabricate” his way into a managerial position for the rebirth of the theater venue in Wilmington’s Eleventh Ward.[9] Really George? What tall tales have you started to tell?

When things get a bit beyond the scope of George’s “previous experience” in theater management, he begins to run further afoul with the law. He’s arrested in Wilmington for handing out “unauthorized circulars.”[10] (Presumably in an effort to promote the theater?) As George’s overreach of his wheelhouse grows more desperate, he even goes so far as to obtain a circus license in a last-ditch effort for “the show to go on.”[11] Needless to say, the Eleventh Ward Theater wasn’t successful, and George’s tenure there quickly came to a close.[12]. Discouraged and bitter, George and his family returned permanently to Baltimore shortly thereafter.

As George’s overreach of his wheelhouse grows more desperate, he even goes so far as to obtain a circus license in a last-ditch effort for “the show to go on.”

Back in Baltimore things aren’t much better. His kids are getting arrested for petty crimes, and he’s pretty well broke.  Somewhere along the way, George must have figured that the only thing he could do was to get out there on the streets, assume an “ecclesiastical sort of garb,” and preach. Thus the “Revered Peart” was “born,” largely in an effort for George to secure that much-needed commodity – cash. Indeed, it had become time for George to “Preach George, preach!”

After a bit, George no doubt understood that his street corner preaching, while winning him some notoriety as a colorful figure in the streets of Baltimore, wasn’t going to pay the bills. Described as “long-haired” “peculiar” and as a “familiar character,”[13] George starts to have even more trouble with the law. George is accused of assaulting his neighbors and getting those around him, including local law enforcement (insert understatement here), generally quite peeved.

In a word, the “Reverend” needed a new shtick. Being a local figure of dubious religious notoriety wasn’t cutting it. It must have been about this time that one of his homegrown concoctions (possibly for calming his nerves?) gave him the idea to sell his herbs and become the “Medicine Man.” Remember, just a few short years before all this hoopla began he’d labeled himself a “nurseryman.” Perhaps it was a natural move for him to become an “herbalist,” and “grow” a new business? Enter, stage left: Peart’s Old Wonderful Herb Medicines. While George appears to have been just an unscrupulous huckster for anything that might sell – religious, herbal, theatrical, or otherwise – one does have to wonder if well, there wasn’t more to George than just what met the pages of The Sun and the police blotters. George, what’s going on with you?

By 1917, his wife Mary had divorced him and was taking him back to court for more alimony. One of his daughters had run away to join a traveling theater company, never to be heard from again. One of his sons would soon make the papers for horrendous spousal abuse. Another daughter would soon go on trial for murdering her husband, and yet another son would die a suspicious death in prison. Peart himself was arrested several times for practicing medicine without a license, and his somewhat clandestine ads in The Sun, well, they weren’t paying off. It must have all become too much. By 1919, there’s no trace of George Washington Peart, Reverend, Doctor, or otherwise. Strangely enough, “The Medicine Man” appears to have simply vanished.

Genealogical musings are a dangerous thing; like Sgt. Joe Friday once said, Just the facts, ma’am.[14] Still, in some ways, I feel like I need to make excuses for George. And yes, I will no doubt have to amend my post, Not a gangster in the bunch, but I can’t help but applaud George’s quasi-entrepreneurial spirit. It’s not that I don’t see the same narcissistic charlatan here that we all do. Yet I also see him as a terrible survivor. Sure, he was always off chasing his own grandiose dreams, usually via civil unrest, but maybe the prohibitions against his “herbalism” weren’t so different from modern-day bans on CBD oils or ‘different’ nutritional supplements. (Maybe he was just off his rocker…) What he “grew,” indeed what he put in his elixirs of Old Wonderful Herb Medicines, was more than just herbs. They were his last-ditch dreams. George, it’s true that you may have been a bit “complicated,” but I have to say that I’m glad I met you. I guess (for now) I’ll just have to wonder how it was that you came to disappear. You see, George, for what it’s worth, in this family’s story you will always be so much more than just plain ordinary.

[4] The Baltimore Evening Sun, Thursday, 12 March 1914, 14, mentions Peart’s trial for being a “fake doctor” and being known as “John the Baptist”; various other articles spanning 1907-17 indicate the same charges brought against Peart.

[5] Peart’s product having a legitimate “registration number” hasn’t been verified.

[6] The Baltimore Evening Sun, Friday, 17 August 1917, 3. George “Medicine Man” Peart hauled to court and ordered to pay alimony. Can no longer use “Dr.” with his name.

[7] Clark Stanley (b. Abilene, Texas ca. 1851) is credited with being the original “Snake Oil Salesman,” marketing a nineteenth-century liniment used as an anti-inflammatory but found to be quite useless.

[9] The Morning News, Wilmington, Delaware, Monday, 23 July 1906, 6.  George is announced as the theater’s new manager at about the end of the first season.

[10] The Morning News, Wilmington, Saturday, 4 May 1907, 1. George gets arrested for distributing “circulars.”

[12] Michael J. Nazarewycz, Historic Movie Theaters of Delaware (Charleston, S.C.: The History Press, 2019), 32-33, states that the Eleventh Ward Theater was “built by the citizens of the ward to pave their streets.” It showed vaudeville, minstrel shows, political events, and picture presentations on a Vitagraph. Its first season ran May-August 1906. George’s tenure there appears to coincide with the end of the first season. It did not survive a second season.