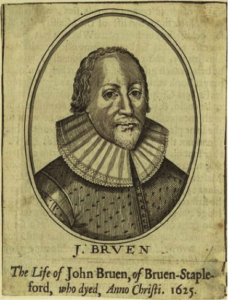 Recently, I wrote about the search for my great-great-great-aunt Minnie (Hickok) Wilcox, and the rewards and pitfalls of what I like to call those Delayed Messages from “beyond.” While I was happy to put the mystery of Minnie to rest (and to collaborate with my new almost-a cousin-in-law Tom), the rest of my family didn’t seem all that enthused to learn the tale and final resting place of Aunt Minnie.[1] Heck, even my clan’s most ardent family history aficionados seemed numb to the small cache of findings about Minnie. The only thing I can say here is that I’m hopeful that their nonchalance about Minnie was just in deference to (and disapproval of) her curmudgeon of a husband, Horace G. “Billy” Wilcox. My great-great-great-uncle Billy probably should have been a 1920s-style “poster husband” for spousal abuse. This isn’t to say that I didn’t hear from “da folks” with regard to Tom’s and my discoveries about Minnie (or Billy). Only to say that by and large I heard from those polite branches, and they for the most part, are distant from ye olde trunk.

I guess I was a bit surprised at all of this genealogical ennui on the part of the family. I realize, though, that their shuffling boredom may very well be my own fault, as it certainly isn’t Tom’s or Minnie’s. You see, as much as I believe the discovery of Minnie’s final resting place and a review of her life are poignant, I recognize that aside from myself (and co-researcher Tom) any discoveries about Minnie’s life will not enthrall the typical crowd. Truthfully, I’ve started to wonder whether my family’s faltering interest with their own ancestral narratives might be caused by a combination of things. First, my children’s notion of “Dad’s always in there looking for dead people” may have finally caught up with me, and, second, if I haven’t created a Munchausen by proxy[2] syndrome with my research (and results), in that the more discoveries I make, the more the individual result pales against the whole panoply of results. Indeed, I wonder if I haven’t exposed my family to so many instances of “the telling” of it all that they’ve gone dead to my wittering ways. As they say in that old song, perhaps, The Thrill is Gone.

I know that Pamela Athearn Filbert and I have talked about the reactions (for me, those “ice-cream stares”) that we’ve become familiar with when bringing up a discovery, random fact, or anecdotal tale in relation to our family history, and perhaps this is what occurred as I tried to tell the story about Minnie. It’s a disappointing sidebar with regard to our efforts (or results) that can really be discouraging. Yet still we persevere. I guess it’s just who we are. 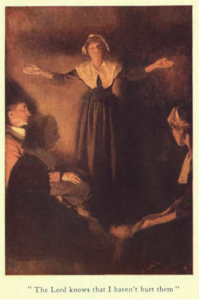 For me, “the telling” of Minnie’s humble and quiet life brought all their boredom into focus. You see, in bringing together the tale (and hopefully the facts) about Minnie’s life I wasn’t telling them (my kin) about any of their ancestral connections, like those to the Bruens of Bruen-Stapleford, or to Rebecca Towne Nurse, nor was I even speculating on the possibility of one to the indomitable Jethro Tull.[3] I also wasn’t trying to extol any “magical” DNA discoveries, or mentioning some erstwhile cousin who (much like themselves) had been fortunate enough to discover a new ancestor via the Mayflower Descendant.

True enough, too, is that I also wasn’t doing a very good job of interesting them in their own direct relationship to Minnie, or to folks like her. After all, she was “just” the wife of some obscure great-great-great-uncle who didn’t live in Montevideo but, rather, lived in, of all ordinary places, Milwaukee. No, I wasn’t telling them about anyone who was superlative. And, after all, why should family – especially those with only the slightest interest in their own dead people – be interested in “just anybody?” (Yeah, go figure…) I have to believe that we, as the resident family historians in our broods, often juggle tracking and keeping all those pesky vital records straight and in order, all while attempting to remain relevant to the most discerning audience of all – our own family. 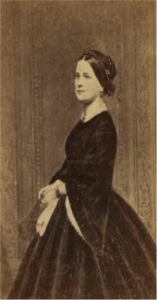 Yes, remaining relevant to our families can be a tough thing. Consider this kind response I received from a family member about Minnie. While pleased to know what had happened to Minnie, my cousin was rather disappointed that her fate hadn’t turned out to be something more intrepid or alluring, and suggested that wouldn’t it have been more interesting if, perhaps, Minnie had been a bank robber running from the law. Really? A bank robber? For me, this was yet another example of where I may have failed in relating “the pulp” of my family tree. In other words, I might have gummed them to death with too much Barnum and Bailey in my efforts to foster interest in something in which they might not have a natural interest at all. I’ve perhaps done this so much so that now “the ordinary discoveries of an ordinary life” just don’t cut the mustard anymore. I’m not trying to say that any of my discoveries are “all that and a bag of chips,” only that in a family where its members would be hard pressed to know the names of their own great-grandparents, let alone their agnate relationship to the (very much slave-holding) family of Julia Dent Grant, you sometimes have to over-salt the broth to get them to taste it.

A bit embarrassed by this reply, I figured I’d best come up with some sort of familial relationship to a female bank robber to appease their disappointment. (I mean really, exactly how was I going to pull a bank robber out of the bag?) This begged the question, too, of why do I keep trying to interest people in a subject in which I have to razzle-dazzle them, rather than to just present the facts about a great-great-great-aunt from Milwaukee? (It kinda gives me an ice-cream headache.)

[The] reason I do this (and I suspect the reason all of us here do this…) is in the hope that a small percentage of our heritage will be remembered, and maybe even preserved…

Nevertheless, I figured I’d better get busy and produce some sort of a familial tie to perhaps Ma Barker,[4] or I’d risk losing my family’s interest for sure. Don’t get me wrong; I know I inundate both my close and extended family with relevant and not so relevant discoveries in family history, but the reason I do this (and I suspect the reason all of us here do this…) is in the hope that a small percentage of our heritage will be remembered, and maybe even preserved by those who do not have any true interest in the extended branches of the family tree. Really, though, where was I going to get a dang bank robber?

Well, the truth is, I didn’t. I don’t have any bank robbers in my family tree. There aren’t any. (My regrets to the lovely and larcenous-ly talented Mrs. Barker…) Among all my crazy Quakers, Puritans, witches, and even an “extended” relationship to a pirate or two – I’m coming up empty. Believe me, it isn’t because I come from a family of do-gooders or Robin Hoods, or even (wait for it…) especially honest people. Oh, heck no. Most of my folks are what we used to call mutts. You know, those old hard working farmer folks who pay (and occasionally don’t pay) their taxes. We do have our reasonable mix of respectable insanity and rare genius moments, interspersed with a few of what I like to call “frequent delinquents,” and the usual admixture of the very patriotic sorts (Yankee and Loyalists alike…) and yes, even more than the occasional nut-job (or six) in the mix. However, I’m sorry (???) to say, not one dang bank robber. My friends, what more can one do? Oh, Lady Whistledown, for the terrible shame and embarrassment of it all![5]

[2] “Munchausen by proxy,” where the caregiver (or in this case the family historian) helps to cause or exacerbate an illness.

[3] Any familial connection to the historic Jethro Tull (1674-1741) or to the present day rock stars of the same name is merely conjecture and wishful thinking on my part.

[5] A character found the novels of Julia Quinn.

18 thoughts on “Not a gangster in the bunch”