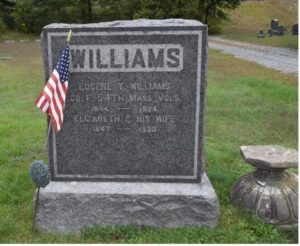 Last Memorial Day, after writing a post on my great-great-great-uncle John Merrick Paine of Woodstock, Connecticut, a lieutenant in the 29th Connecticut Colored Infantry Regiment, I became interested in researching other soldiers in this regiment also from northeastern Connecticut. Several of them were from families I had researched previously, with one surprising connection to a colleague here at NEHGS.

Clarence Winthrop Bowen’s The History of Woodstock has a descriptive history and lists of soldiers from Woodstock who served in the Civil War. Within the 29th, besides John Merrick Paine, there was one other white officer, Capt. Daniel Albert Lyon (1840-1917), who served in Company F. Like John Merrick Paine, Captain Lyon was also captured at the Battle of Winchester on 14 June 1863, where he was wounded. The closest kinship (out of many) I have to Daniel is fourth cousin four times removed through our common Lyon ancestors.[1]

Five black residents of Woodstock served in the 29th, all in Company D – Azariah S. Freeman, William H. Green, Henry C. Jackson, Fitz Henry Newport, and Oscar Ransell.[2] Not all these men had a long connection to Woodstock. Oscar Ransell (ca. 1842-1920), was born enslaved in Fairfax, Virginia, and while he lived in Woodstock at the time of his enlistment, he moved to Bridgeport, Connecticut after the war; he later lived in a soldiers’ home in Tennessee (in 1904) and died at another soldiers’ home in his native Virginia in 1920.

Elsewhere in northeastern Connecticut, I have so far identified three other black soldiers in the 29th Connecticut that I had previously researched. The first was Albert E. Malbone (ca. 1844-1888) of Brooklyn, Connecticut, who also served in Company D. Most people of color in northeast Connecticut with the surname Malbone descend from individuals enslaved by Godfrey Malbone (1724-1785), a slaveowner from Newport, Rhode Island who moved to Brooklyn, and a Loyalist during the Revolutionary War. By Sarah C. Spaulding, who is a distant cousin of mine, Albert had one son, Albert Malbone Spaulding (1868-1894), and I grew up with several of his descendants.

The other two soldiers are from Eastford, Connecticut. The first was Charles Webster (1841-1864), who served in Company H. I found a reference to Charles’ gravestone in a blog about the 29th Connecticut.  The grave is on private property adjacent to Natchaug State Forest and near a camp I went to as a child. As Charles died soon after returning from war, his parents named another son Charles in 1866. The younger Charles married Mary E. Lambert, daughter of William Lambert (ca. 1830-1896), who had also served the 29th Connecticut (in Company G with my uncle John Merrick Paine).

While I grew up with several descendants of William Lambert in northeast Connecticut, there was also a surprising connection to another person on staff at NEHGS.

While I grew up with several descendants of William Lambert in northeast Connecticut, there was also a surprising connection to another person on staff at NEHGS. Last year, when Elizabeth Peay wrote her post about her grandfather George Peay playing in the Negro Leagues, his name seemed familiar. When I researched my friends’ ancestors as a teenager, I frequently listed other children and grandchildren of the individuals I was researching. Searching my private genealogical database, I noticed I had both George and his wife Gladys Antoinette (Webster) Peay in my database! Gladys was a great-granddaughter of William Lambert and grandniece of the elder Charles Webster. I also realized Elizabeth was a third cousin to several childhood friends, who are, in turn, my distant cousins.

The more well-known black regiment of the Civil War was the 54th Massachusetts Regiment, popularized in the semi-fictionalized war movie Glory starring Denzel Washington, Morgan Freeman, and Matthew Broderick. I attended a zoom lecture earlier this year by Professor Douglas R. Egerton, author of Thunder and the Gates, a terrific book regarding the history of the Massachusetts 54th, their sister regiment the 55th, and the 5th Massachusetts Cavalry. Among the officers and soldiers portrayed in this work are Col. Robert Gould Shaw and Lieut. James Monroe Trotter, father of Boston civil rights activist William Monroe Trotter.[3]

As noted by Bowen, one later resident of Woodstock who served in the famed 54th was Eugene Turner Williams (1844-1924). Williams lived in Oxford, Massachusetts at the time of his service, but moved to Woodstock around 1874 and lived there for fifty years. Several of his Williams descendants still live in northeast Connecticut, and I knew his grandson Carl Raymond Williams (1920-1992) as a member of the same church I attended in my youth. As Carl was four years old when his grandfather died, this makes me only two degrees removed from a soldier in the 54th Massachusetts!

[1] One other white resident of Woodstock had service in another black regiment, Lieut. Charles H. Potter (1842-1903) of  Company H, 24th U.S. Colored Troops, who later moved to Nebraska and then Alabama. Charles’s mother, Sarah Child (Morse) Potter, was a sister of Eliza Eaton (Morse) Morse, mother of William Porter Chapin, a subject of a previous post. Like Chapin, Potter was related in many ways.

[3] Robert Gould Shaw’s sister Josephine married General Charles Russell Lowell (1835-1864) and is treated in the genealogy co-authored by Scott C. Steward and myself, The Descendants of Judge John Lowell of Newburyport, Massachusetts.

6 thoughts on “The 29th Connecticut”