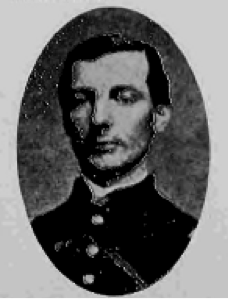 My great-aunt, Florence Augusta (Child) Young (1910-2003), whom I remember fondly from my youth, was named for her own great-aunt Florence Child Paine. The younger Florence’s father, William Chapin Child, was the fourth of five surviving children of Henry Thurston and Ella Eliza (Fitts) Child. Ella had her last child in 1885, and, as a result of complications in that last childbirth, was in pain for the rest of her (long) life until her death in 1948. Ella’s then unmarried sister-in-law Florence stepped in to help with the rearing of her five nephews, and her nephew William honored her by naming his eldest child after the woman who had helped raise him. This elder Florence lived into her early nineties: my father’s sister remembers her as a child, surprised to meet the widow of someone who had served in the Civil War! Last year, my aunt wrote a touching Memorial Day tribute to our uncle, and this Memorial Day, I’d like to continue telling his story.

John Merrick Paine was born in Woodstock, Connecticut 13 January 1845, son of John and Mary Ann (May) Paine. He enlisted in Woodstock on 30 July 1862 and served as a private in Company B of the 18th Connecticut Infantry. He was captured at the battle of Winchester on 15 June 1863 and held at Libby Prison and Belle Isle Prison. He served as a lieutenant in Company G of the 29th Connecticut Colored Infantry Regiment, taking part in the battles near Richmond in 1864, and was wounded at Petersburg on 27 August 1864. He served in total for three years and four months.

As I have discussed before, many residents of Woodstock at this time were related several times over…

After the war, he returned to his family farm in Woodstock and married Abby Prudence Child. They had two sons – Robert Child Paine and John Brainerd Paine, the latter of whom died at only eight months. John’s wife Abbie died in 1894, and he married her first cousin once removed Florence Child the following year. As I have discussed before, many residents of Woodstock at this time were related several times over; the chart below shows the closest way (out of dozens) that John was related to his two wives, and how they were related to one another. 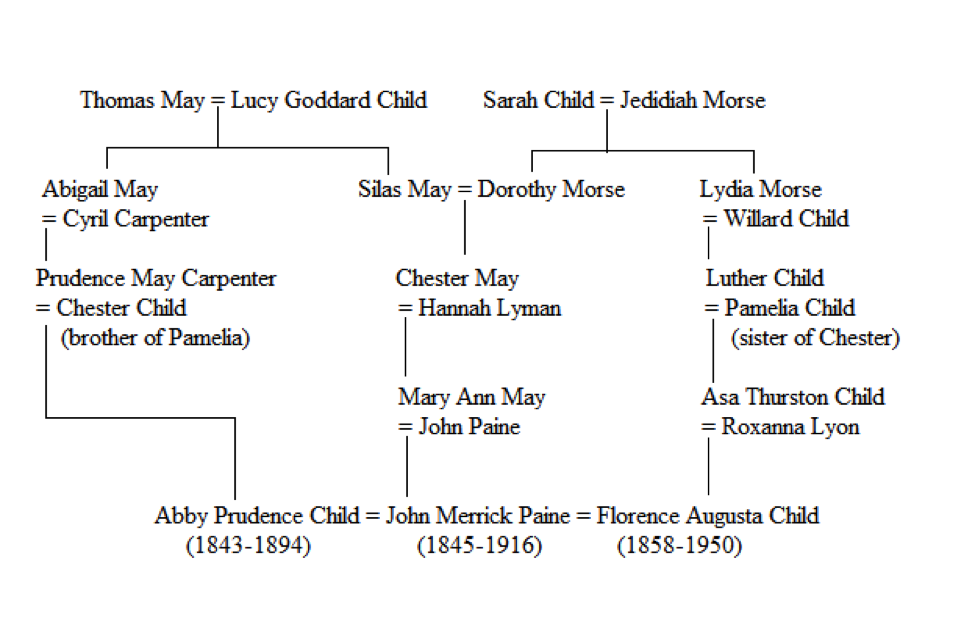 In addition to the family farm, John also had a successful career in banking with Putnam Savings Bank, serving as vice-president and ultimately president. He also represented his town in the Connecticut state legislature. However, in his later years, he began to fear he was losing his mind. In 1916 he took his life with a rifle in the woods of his farm. His note read:

My mind is going wrong more and more and I fear I shall be a menace to my friends.

While no mention of his mental state was attributed to Paine’s earlier war service and imprisonment in the newspaper accounts of his death, an older relative who was living when he died speculated that having once been confined, he was determined to never experience it again. 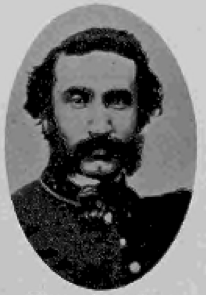 A newspaper article reporting his funeral noted that among John Paine’s pallbearers was William Child of Woodstock. I first thought this was my great-grandfather, who was John’s nephew by marriage and, as mentioned above, had named his daughter after John’s second wife. However, in searching Woodstock records, I think it is more likely this was an older William Lyon Child (1835-1918), who had also served in the 18th Connecticut Infantry (enlisting on the same day as John Paine) and imprisoned at Winchester on the same day as well. These two men (and cousins) shared many of the same wartime experiences and were friends for the rest of their lives; they are buried near each other at East Woodstock Cemetery.