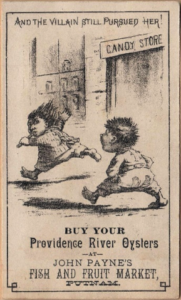 The “Victorian Trade Card” at left recently came up for sale on eBay, prompting a friend to send it to me as it concerns “John Payne’s Fish and Fruit Market, Putnam” in my Connecticut hometown. While I had never heard of the business, I soon found John Paine (1850-1919) listed in censuses as a fish peddler, meat peddler, and butcher.[1] A decent treatment of the Paine family in northeastern Connecticut is given in the eighth volume of Clarence Winthrop Bowen’s Genealogies of Woodstock Families. While I have a full set of this work at home, I had loaned the last two volumes for several years to Scott Andrew Bartley so he could use them for Early Vermont Settlers to 1784, as they cover many families moving from northeast Connecticut to Vermont. (The first six volumes are available online.) Fortunately, he had returned them to me only a few days before this card was sent my way!

The Paine family most common in northeastern Connecticut descends from Stephen1 Paine of Rehoboth, Massachusetts. In a prior post, I had mentioned Major Amos6 Paine (Amos5, Daniel4, Samuel3, Stephen2-1),[2] the second husband of my great-great-great-great-great-grandmother, who had financed the publication of Life of the late General William Eaton, a memoir of his second wife’s brother, a prominent military officer. This publication was the best documentation for the original maiden surname of his second wife, my ancestor.

Stephen Paine (DannA, GeorgeB, ThomasC-D) was born at Great Ellingham, Norfolk, probably between 1602 and 1607. He arrived on the Diligent in 1638, settling first in Hingham, Massachusetts, and later in Rehoboth, where was buried 21 August 1679.[3] The main reason I first studied this family is because they are “former ancestors.” In this family chart, my great-grandmother’s great-great-grandmother, Mary Whitmore, wife of Joseph Healy, is identified as the daughter of Daniel and Dorcas (Converse) Whitmore of Thompson, Connecticut, and descending from the Paine family of Rehoboth.

Mary’s birth is given in a 1901 genealogy as 14 September 1735. Per her gravestone in Dudley, Massachusetts, she died 20 April 1802, aged 65, which is within a year of that claimed birth date. However, the proposed parents, Daniel and Dorcas (Converse) Whitmore, had twelve children recorded in Killingly, Connecticut (the northern portion of which later became Thompson, which borders Dudley), between 1723 and 1741, and no Mary![4] Further, Daniel and Dorcas had daughter Abigail on 5 June 1733, son Aaron on 27 March 1735, and a daughter Elizabeth on 13 March 1736/37, making the probability of an unrecorded child in the mid-1730s very unlikely, and impossible at the date above. Of these former ancestors, the most painful to lose was the Chickering family behind Dorcas’s maternal grandmother, which had provided me with a distant kinship to President Benjamin Harrison. With these ancestors gone, Harrison and Chester Arthur remain the only presidents with colonial New England ancestry to whom I have not found any distant American kinship. There is a Mary Whitmore, born 3 September 1735 (recorded in both Cambridge and Lexington, Massachusetts), daughter of John and Lydia (Cutter) Whitmore, which has appeared as my Mary in numerous online trees, but I’m still searching for more definitive evidence of this connection.

As for the fish peddler John Paine who inspired this post, he was very likely from a different Paine family and is not treated by Bowen (although John is mentioned by Bowen in a section on the family of his wife Lillian Bugbee, who is a distant relative of mine via the Child family). John’s father Christopher Paine (1817-1897) of Killingly, Connecticut, was the son of Joseph and Drusilla Paine of Foster, Rhode Island, and that is as far back and I can go, despite several online trees getting a bit wild with alleged earlier ancestry. What a pain! Oh well, these are not even my Paines anyway, and I know there are a few Vita Brevis readers specializing in other Pain(e) families of New England!

[1] Despite the card saying Payne, nearly everything else for the grocer says Paine.

[4] A summary of the family of Daniel and Dorcas (Converse) Whitmore can also be found in the 1907 Whitmore Genealogy. For an interesting DNA article on the Jewish origins of the Converse family of Massachusetts, see Carolyn A. Converse, “Y-DNA Studies of an Early New England Family Indicate Possible Jewish Ancestry,” American Ancestors Magazine 20: 2 [2019]: 60-62.

16 thoughts on “Bringing the pain”