Even before I earned my master’s degree in public history, I liked to fancy myself a bit of a family historian. I am lucky enough to still have three living grandparents: ages 86, 89, and 94. I have taken up the task of recording conversations with them about their early lives and families, so that their stories can be preserved for future generations.

I’ve gone through photo albums with my grandparents and seen some of the family heirlooms that have been passed down for generations. As a former journalist, I was interested in documenting stories, and that was my focus for years. I recently went back to school and received a master’s in public history. So last Christmas, when I was visiting my paternal grandparents down in Florida, I decided to use my new training as a historian to ask my grandmother more questions and document what I might have missed over the years. 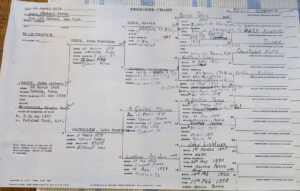 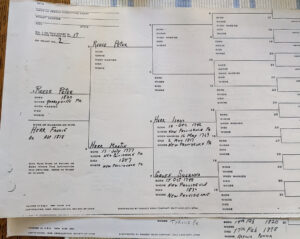 During one of our conversations, my grandmother pulled out a collection of family group sheets that she received from her own father after his death. These sheets were copyrighted in 1936 from the Genealogical Society of Utah. I was unfamiliar with most of the names of the chart, and was surprised to find that one of the lines traced back to a 1746 birth in Pennsylvania. I knew my grandmother had always said we were descended from the Pennsylvania Dutch, but I had never seen the proof until then.

I had also never seen a group sheet before, and while they were interesting, I initially put them to the side and did not think much about them. Cut to five months later, when I joined American Ancestors/NEHGS as a researcher and I learned all about their usefulness.

Curious about why we had so many generational charts, I learned that my great-grandfather had turned to Mormonism after a cancer operation, and became interested in family research. Without his work digging for our family roots in Utah, I would not have such a rich starting point for my own research.

Since starting my new job as a researcher, I have given my own family group sheets another look. I was stunned by how much information had been recorded, but also by how much was still missing. I know that my grandmother also has Irish ancestry, but the Irish side stops in Pennsylvania in the early 1800s.

I have more research to do to see if I can add any more to those sheets, but I will be starting fresh on my grandfather’s side. All I know is that at least part of his family is German and settled in New York. As for my maternal side of the family, my mother is a second-generation immigrant. Both of her parents were born in Mexico and moved to the United States in the 1950s. A quick search helped me find my grandfather’s 1921 birth record in Sahuayo, Mexico, but there are many paths I have yet to pursue. I am excited to jump into my family research as soon as I find some free time, and cannot wait to get started.