I guess this shouldn’t be a surprise, since the book I was paging through was my great-great-uncle’s history of the Harvard Polo Club. Amos Tuck French[1] was one of the founding members of this iteration of the club, and he begins engagingly: “Polo was started at Harvard in 1883, many years before it was even thought of at any other college. In fact it was not generally understood what the game was, for we received a challenge from Yale to play a match and discovered on enquiry that the Elis wanted to play hockey on roller skates!”[2]

Raymond Belmont[3] – son of the first August Belmont – “talked polo through his waking hours and dreamed polo in his sleep…” During the summer break of 1883, while staying in Newport, the younger Belmont invited some Harvard friends “to meet several times weekly and, mounted on [his brother August’s] ponies, knock the ball about on a hired empty field on Bellevue Avenue, just beyond the Havemeyer place.”[4] Ah, for the days when there was an “empty field” on Bellevue Avenue…

He notes that, in the ‘80s, “the horse was as unknown [in intercollegiate sport and undergraduate life] as the horseless buggy.” Raymond Belmont had an idea: he bought “a [train] car load of the fastest cow ponies he could find and ship[ped] them to Cambridge, to cost about one hundred dollars apiece. The car of 21 ponies arrived in charge of [Frank] Iselin on May 11th [1884].[5] Our fellows had an exciting time looking them over, trying them, and getting bucked off some, and matching coins for the new mounts, which were chosen by lot on May 13. This addition gave the Harvard Polo Club about forty ponies to use in the game.”[6]

In 1884-85, Uncle Amoy was the Club’s president. The ever-present danger around horses, even when not playing polo, is captured in his account of Olie Bird,[7] who “had a bad fall in the woods back of the [Country Club] house, the horse rolling over him, the soft mud alone saving him from being killed. He staggered into the dressing room, covered with blood and mud, while French was changing his clothes. No one had seen him fall. He was dazed and dropped on a bed, muttering, ‘What have I been doing?’ French rushed for a doctor, who found slight concussion, a broken collar bone and face badly cut.”[8]

He has another story of hitting Elliott Roosevelt – Eleanor’s father – over one eye with his polo mallet. Belmont, the team’s captain in that match, had directed French to monitor Roosevelt closely, so while the accident was unintended (he was “striking at the ball”), “cold-blooded little Raymond rode alongside of me and whispered, ‘You’re doing splendidly, old man, but don’t hit him in the head again.’ He took it for granted I was merely carrying out his instructions.”

“[Cold-blooded] little Raymond rode alongside of me and whispered, ‘You’re doing splendidly, old man, but don’t hit him in the head again.’”

Of Elliott, French adds that he “was a charming figure in those days, a good sportsman, a bold rider to hounds at Meadow Brook,[9] and popular with all classes. He was the younger brother of Theodore, and had the same teeth-gritting, pugnacious manner” – as suggested by Elliott’s cheerful acceptance of his apology for clumsiness, after which the two “were bosom friends ever after.”[10]

And, as in all good tales, the Harvard Polo Club team prevailed in a famous match against Meadow Brook in 1885. In the end, Harvard was five goals to Meadow Brook’s four, and “The excitement was indescribable. Belmont’s pony refused to get up, being dead beat, and we three that were left[11] knocked the ball out of bounds, just as ‘Time!’ was yelled by the Referee. Harvard had won!”

He continues: “I don’t know how the others felt, but as for me, I threw myself off my pony pretty well done up. My father[12] rushed out from among the carriages and wrung my hand with more enthusiasm than I had ever seen him display over a sporting event before. We had beaten the champions, the men who knew it all and had been telling us all summer how to play. It was indeed exhilarating. Those that had the nerve to bet on us reaped the harvest. Prescott Lawrence[13] made five hundred dollars and so did Harry Sears.[14] Olie Bird made several hundred, and Augie Belmont[15] and Wintie Chanler,[16] and so on. My silver Championship Cup looked bigger than the largest tank ever constructed by silversmith. And yet it was too small to hold my pride and joy!”[17]

The book ends here, with a nod to the rapturous press and then, of course, to the next society craze, the forthcoming America’s Cup race between Puritan and Genesta.

But turn the page over, to the photo captioned “Three Survivors,” showing Bird, French, and Egerton L. Winthrop[18] at my great-grandparents’ house for Amoy French’s marriage to my great-great-aunt, Mattie Beeckman, in November 1914. 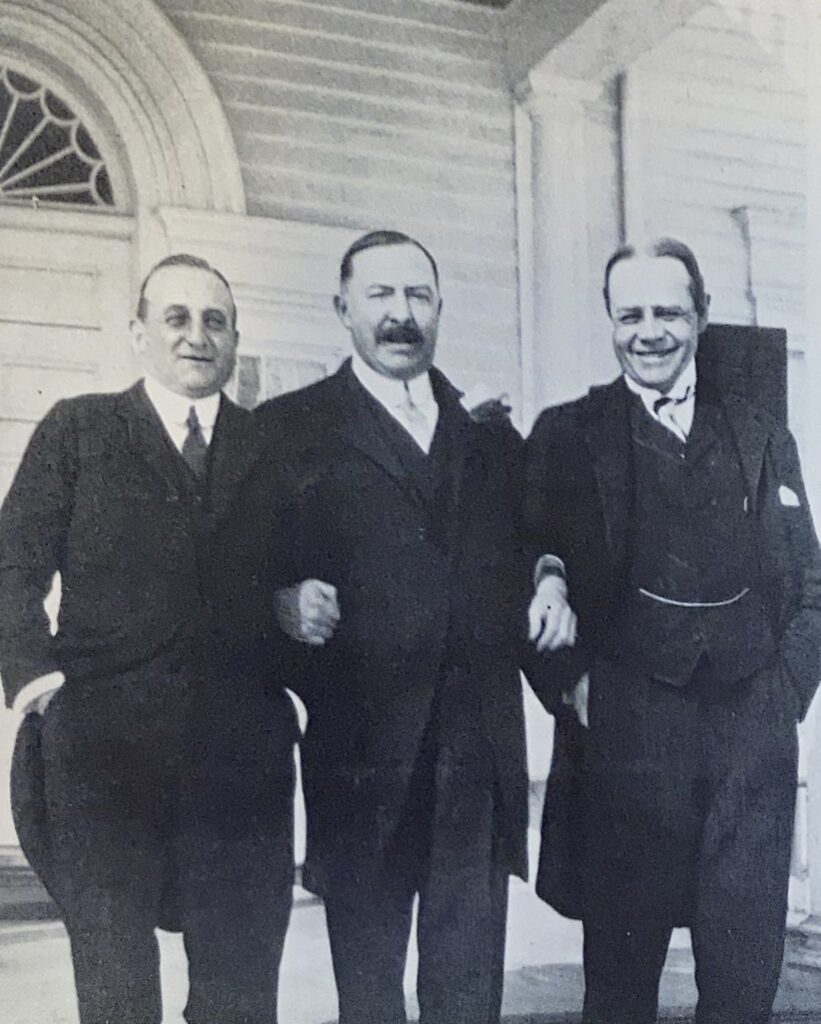 [5] The total amount paid here was equivalent to a healthy annual income for one person.

4 thoughts on “The Harvard Polo Club”