Several months back, Chris Child and I started playing a game we’ve dubbed “Genealogical Clue.” Playing a good game of it can be quite fun and challenging. Largely, it’s a game whereby we attempt to locate an individual in our respective family trees with a first name that resembles or is near identical to their surname. From this jumping-off point, the post or story is then titled by how we “place” those individuals in a Clue game-like situation. Keeping up with a master player like Chris hasn’t been easy, though. I’ve really had to dig deep to find some of my better “game board connections.” Sadly, most of my potential protagonists never seem to quite cut the ‘Colonel’ Mustard. (lol)

Because of this, I’ve expanded the search beyond my limited supply of persons with first names that ‘mirror’ their surname. I’ve moved more towards an area of Genealogical Clue that resonates in situ, such as “in the library” or “in the gallery.” (And naturally, I’m trying to stay away from those folks inclined to any weapons of premeditated passion!) Of course, then there are those pesky verifications that come along with trying to both create and solve the riddle to play the game. This certainly helps keep things more interesting … if not more complicated. As we all know, verifications can fall apart at the drop of a hat when piecing together “the rest of the story.” I try not to get too discouraged when this happens. After all, how can we place “Colonel Mustard in the conservatory” if indeed I can’t prove he ever existed? (Such are the problems of the existential genealogist…)

…then there are all those pesky verifications that come along with trying to both create and solve the riddle to play the game.

So I’ve gone back to where it all began for me. I’ve gone back to where I started to learn about family history, and to my paternal grandmother, a multiple-line Mayflower descendant who was in turn adopted by a great-great-great-great-great-great-great-granddaughter of William Bradford. I have always believed it was because of her adoption that my grandmother became more attuned to family history than “the average bear.” Indeed, she could recite the names and relationships between different branches of the family for several generations. It was through my grandmother that I came to crave ancestry and the interesting characters contained in any family’s history. There was however another very influential person who caused me to affix myself to the study of family trees. His name was Barnabas Collins. 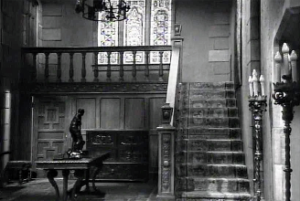 Wait?! What?! Hey, what can I say? I am a child of 1960s television, and right or wrong I fell under the spell of the mysteries of an old mansion in Maine called Collinwood. When you are a kid growing up in sunny California (and you have a Mayflower descendant/Kansan grandmother regaling you in the lore of your lineage), the ancestry of a 200-year-old vampire’s family in Maine, well, they all just seemed (to me) to go hand in hand. (What can I say? I was twelve years old!) Those folks in Collinsport seemed to live their history. Heck, even ‘the ghosts’ knew their pedigrees. All of this made that wannabe genealogically-inclined kid want to listen and learn more. (I mean, we can’t all be as fortunate as Jan Doerr and live in our ancestor’s cool 200-plus-year-old house, right?)

So, in thinking of new angles for a good game of Genealogical Clue, I decided to see just what I could find out about Barnabas Collins. (I was after all a descendant of the immigrant Henry Collins,[1] so maybe I had a chance.) I realize that a vampire from New England’s pedigree can be quite “complicated” but, still, I wanted to see if there was a genealogical connection between myself and Jonathan Frid, the actor who portrayed the famous vampire. Yes, I know that all of this is wishful ‘phantasmagorical’ thinking on my part and truly quite silly. (However, in my defense, no one ever said that a good game of Genealogical Clue couldn’t also be fun.) A quick investigation revealed however that I had little to no chance of finding any immediate connections to the venerable Mr. Frid. (Darn it anyway.) This meant I was just going to have to look further at the cast of characters that had schooled me in the need for an essential family pedigree chart so early on.

I looked at the actors who had played Quentin Collins and the famous witch Angelique Bouchard Collins (actors David Selby and Lara Parker respectively), but again it was a ‘no-go’ in terms of any shared common ancestry easily coming to light. (Darn it anyway – I liked that witch.) Undaunted in my task, I decided to stretch out a bit further and look at actress Joan Bennett, who played the reclusive Elizabeth Collins Stoddard, the matriarch of Collinwood. I reasoned surely if there were any genealogical connections they must be with her. The character of Mrs. Stoddard just screamed old New England ancestry, and since Miss Bennett had played the part so well I had to believe that she drew from some inner Yankee or Mayflower spirit to make her portrayal of Mrs. Stoddard so successful.

I sure didn’t find much. I had no luck discovering any connection in New England linking me to the actress. I suppose I should be content in that I did find an indication of very strong Mayflower ancestry in common between myself and Joan Bennett’s first husband[2] (we both descend from Stephen Hopkins), but nothing much more than that. Oddly, I did find a remote connection between myself and Joan Bennett in the Schooley family of New Jersey, making her a relative of my dad’s. (Go figure!) So I guess my exercise in connecting to the actress who portrayed the matriarch of Dark Shadows wasn’t completely in vain. Both Miss Bennett’s and my Schooley ancestors appear in the same volume of Trails of Our Fathers.[3] Still, the connection feels more anecdotal than one easily documented. It sure isn’t in the place I’d hoped it might be. (A link between Miss Bennett and myself to those Salem witches would have been awesome!)  What was I going to do? I was running out of possible candidates for this potential game of spooky Genealogical Clue…

I decided to give my efforts here one last hurrah and take a look at Collinwood’s erstwhile heroine, Victoria Winters, or rather at the actress that played her, Alexandra Isles. I admit I didn’t have much hope of any shared connections. Still, it seemed worth a shot to investigate.

Ms. Isles is of predominantly Danish ancestry that connects her to minor nobility and beyond. Her grandfather Count Carl Moltke was the Danish ambassador to the United States.[4] While all of this was interesting enough, I wasn’t seeing how any of it might connect me to the actress, and thus to her role as Collinwood’s tragic heroine. However, before I get too far, I need to mention that something did catch my eye about her. (And, yes, I know I’m digressing again…) It was Ms. Isles’s connection to a fairly prominent name that somewhat sadly I found in my family tree. It was in her relationship with a distant cousin of mine. A cousin whose name was Martha Sharp Crawford.[5] Who???

Maybe it’s no big deal, but it felt a bit curious that Cousin Martha, aka Sunny von Bülow, and the wife of Claus von Bülow,[6] an uber-wealthy fellow to whom Ms. Isles was romantically “linked” (and a man acquitted twice of trying to kill his wife) was the same Sunny in my family tree. While “the jury isn’t in” on all of this just yet, it appears that Martha Sharp Crawford and I are at least, in theory, distant cousins. Seriously though, was that going to be enough to beat Chris Child at a game of Genealogical Clue?

Sarah Taylor wasn’t anyone I’d paid much attention to before.

Sarah Taylor wasn’t anyone I’d paid much attention to before. A distant figure in the tree of my maternal grandfather Frank White Lee,[7] she was born ca. 1647 in Boston and married three times. She married first Thomas Canney, second John Wingate, and lastly Richard Paine. I discovered that Alexandra Isles descended from Sarah’s second husband and myself from her first. This worked in giving me the genealogical connection I was hoping for. I mean, how could I go wrong with a connection to the character of “Miss Winters,” when I had not only an agnate tie to Alexandra Isles but also (albeit a tenuous one) to the tragic Sunny von Bülow – her competition for the affections of Claus von Bülow? Can you say soap opera? Indeed, can you say Dark Shadows?

So many thanks to Barnabas Collins; to my grandmother, of course; to Chris Child; the remarkable Miss Joan Bennett; and to cousin Alexandra Moltke Isles for helping me to gather up the pieces of a real family tree “to draw” out against the fictitious (wait – they’re not real?) characters of Collinwood for a good old-fashioned game of Genealogical Clue. It’s been a blast to comb through the different ancestries of the actors who played those sudsy parts to see just where I might have ‘fit in’ on any day of the week as I tuned in to watch that spooky old show. (Hey, it’s not easy running from vampires!) I can still hear that somber music start to play as the waves crash against the rocks of Widow’s Hill below. Now I can hear that voice speak up once again over the credits and with new meaning say “My name is Victoria Winters…”

4 thoughts on ““Miss Winters in the drawing room””