With all of their ‘lives’ so scattered about, I really had nowhere to run and certainly nowhere to hide. There were papers and pictures everywhere, and in the midst of the fray of utter ancestry I caught my grandmother “Miss Ogle” (no pun intended…) staring back at me. Carefree and young in her photograph, she ‘watched’ as I rifled through my great ‘genealogical reduction.’ Her gaze appeared to crisscross over all those lives, and over the hodgepodge of paperwork connecting me to a host of pilgrims and witches … and other assorted knuckleheads. From her grainy Kodak vantage point, Miss Ogle seemed to smirk in humorous disbelief at my genealogical disarray as if to say “Well, isn’t that just the living end…”[1] The only thing I could think in reply to the memory of her long-ago voice in that near-forgotten photo was“Sorry grandma. I need to. It’s time.”

And so there I was, in all my ‘genealogical straits,’ with those dang papers spread about. Good Lord, why was I having such a difficult time of it? After all, none of the items were of critical importance or a priceless relic. Why then did they all feel so very important? Most of “it” was nothing more than tedious duplication: photocopied book pages clinging to ancient newspaper clippings, typed 1910s correspondence to someone’s congressman, and a bunch of family history inquiries contained in circa 2001 Hal, Do you read me? emails.[2] Yet here it was, {much of} my genealogical work strewn in with a mass of family and strangers interleaved with obituaries of people somebody else once knew. The conversation(s) in my head varied between How can you even think of throwing these things out? and What the heck have I been keeping these things for?

Woven in among these various extracts were “the proofs” that had helped me verify five patriots for my mother’s membership in the D.A.R., and breadcrumbs to the only gateway ancestor who might ever give me the slightest chance of membership in the Royal Bastards.[3] (I mean, who doesn’t want to be a Royal Bastard?) And there, too, were my grandmother’s things (believe me, she keeps watch…): she, with her verification(s) of Mayflower descent. Did she have any idea what it took to join the GSMD or keep up with five lines of Mayflower ancestry? (Talk about the living end, grandma…)

Sadly, “pruning the tree” or assigning appropriate value to items in my collection has never come easily for me. (“I am not a hoarder, I am not a hoarder…”) How does one deal with a collection of so many truth-filled things surrounded by so much fodder? How do you assess value on copies of speculative DNA “origins,” or distant family connections from this cousin Larry to that cousin Larry?[4] Does anyone truly need copies of Browning for the royal ancestry of Richard Lyman? Do I really need to prove myself wrong again?[5] 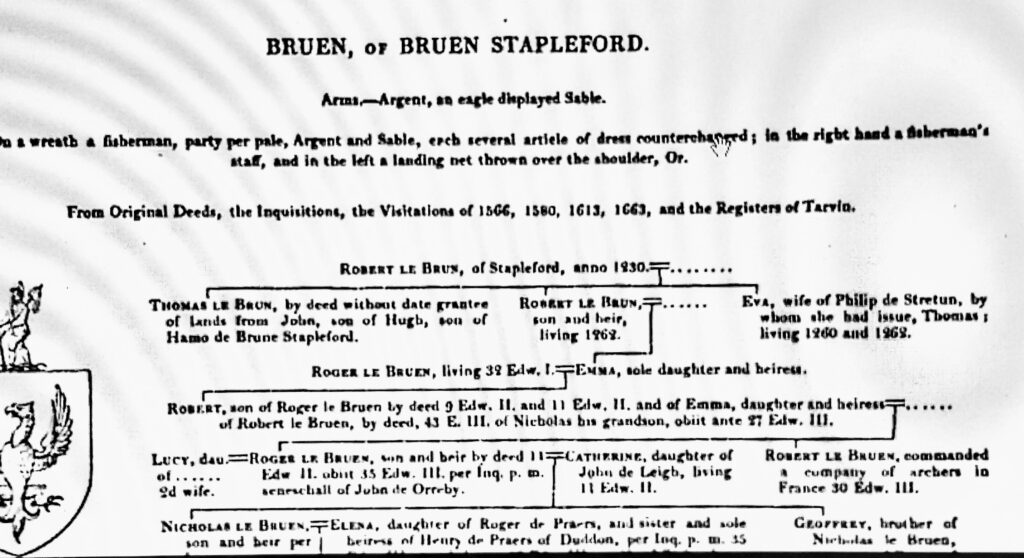 Yet here in this same “pile” were the photocopies of the Boston Evening Transcript to supplement my Bruen ancestry; no doubt these were the same ones I surely had to bribe a public official way back when to get. Aren’t they still of value? What about the Patten Genealogy?[6] I’d waited so long for the inter-library loan of that book just to photocopy those few pages linking my maternal grandfather to early New England. And what about those darn ‘inherited’ pieces, those family data sheets that Cousin Barbara so painstakingly prepared back in ‘81? You know, the ones that must have been done on some facsimile of a Commodore 64? Was I supposed to just chuck it all out? (Okay, dead people, you can speak up anytime now…)

This all becomes relevant in that I am getting way old and we (my wife and I) are considering a move to different digs. I’m gently reminded that we need to consolidate our lives. (After all, isn’t what you have and do all online now, anyway?) I guess I’m man enough to admit that my genealogical purge has been one heck of a grieving process, too; you know, one of those “from denial to acceptance” sorts of things. It’s a reluctant truth that my thirty-plus-year collection of genealogical work” might not be the best candidate for the unfettered lifestyle; I do “get it.” After all, who really needs a hard copy of Cemeteries of Allen County, Kansas on the nightstand? It seems it’s time for a lot of the old books (and old people) to find a new home and move on. (Hey, smile because it happened, right?)

[My] genealogical purge has been one heck of a grieving process…

I think one of the worst parts of all this living end business, though, is the photographs. Yes, all those unnamed and undated pictures clinging to the edges of cellophaned black pages. I don’t know about you, but it’s damn hard figuring out just what to do with Aunt Nila’s pictures of her vacation at the Continental Divide. Just how many 1934 baby pictures of Cousin Dolores does anyone need? Certainly Cousin Dolores’s family must have their own and, truly, nobody has heard from that branch of the clan since the 60s. (How do you know ‘they’ won’t show up looking for those baby pictures someday?) So, again, my friends, what exactly am I keeping them for? Some oddball eventuality or some hoarding uncertainty? Egads!

In the middle of this family history triage zone, though, there is something that can’t be seen. (No, not you, grandma…) It can’t be chucked, shredded, or discarded. It’s our passion for all things vital. It surely isn’t the idea or even the appearance that we do genealogical work solely for ourselves because, well, that wouldn’t be true. Certainly genealogy and the accoutrements we amass are “the proofs” in which we all can take great pride. In that respect, it does become very personal. However, like some wise guy way back when said, “Once you eliminate the impossible, whatever remains, no matter how improbable, must be the truth.”[7] I think this maxim holds up in the study of genealogy, too. We often work on our way through genealogy via a process of elimination to reach the truth. We do this not only for ourselves, but amass “all this paper” with the hope that the truth behind it (and the falsehoods we eliminated) will matter to those who come after us. (And, no, devotion to it all isn’t found online.)

So I am proud to report to you that I am making some progress. I’ve donated my hard copies of the Hoyt and Burr genealogies to charity, but have secreted away my copy of a Genealogical record of the descendants of David Sage. (I have my limits!) I have “chucked” many of those 2001 Hal, Do you read me? emails. However, I will admit to having retained a few messages from a sundry cousin by marriage giving my family a remote and wonderfully unproven connection to the ill-fated Titanic. I mean who doesn’t want a connection to My heart will go on, right?[8] 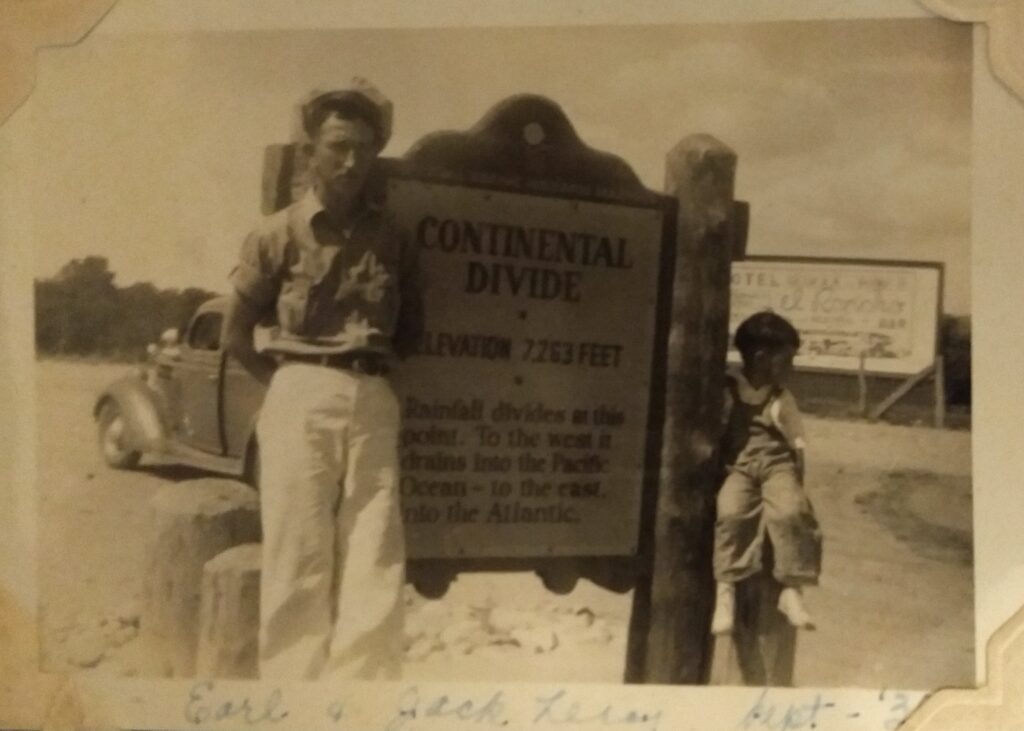 I have let go of many of those items on the periphery, those inherited genealogical sketches from Cousin Barbara, her notes on the 1880 census and, yes, sadly, also Aunt Nila’s pictures of the Continental Divide. I even let go of some handwritten letters from the 1920s sent by some unidentified woman called Aunt Flora. (Do you hear that thunder in the distance?) I just can’t keep it all. I’d say I’ve made a fairly good reduction, though I can also see by my grandmother’s look in that old picture she doesn’t entirely understand or approve. I have, however, managed to reduce the onslaught of paperwork and “stuff” by a respectable one-third. It seems like anything more would be genealogical heresy, and that’s a crime I am just not ready to commit. Like you, I know all too well that by relinquishing many of these notes I may be chucking the very thing that would have allowed me to play a better game of genealogical Clue with Chris Child or, worse, the one piece of evidence that would have allowed me to discover that I was indeed a true Royal Bastard all along. (Seriously, did you have any doubts?)

And so I hope you will take this particular post as my ‘advice column’ to you and let me wax a bit “Ann Landers” in this Vita Brevis world of ours, if only for a moment. Be careful, of course, but consider what you need to keep. You can’t keep it all – nor should you. However, don’t give into the idea that it can all be found online or that you may just be doing it all for yourself. It can’t be, and you most assuredly are not. Let me just say that someplace out there in the ether your own grandmother is staring back at you from her own version of a Kodak moment. Let’s face it, you may have to answer for both what you kept and what you discarded along the way. To this end I say “Be brave” and don’t look back. We can’t carry it all with us, my friends, but do be of good cheer. There is no way we will ever reach the living end.

[1] Used here as “an expression of slight disapproval,” or for “the utmost in any situation,” per dictionary.com. It is said to be a colloquial expression originating in the late 1930s.

[3] A reference to my Gateway ancestor Obadiah Bruen (1606- bef. 1690) and Descendants of the Illegitimate Sons and Daughters of the Kings of Britain, a lineage society often known as the “Royal Bastards.”