There’s something that happens when researching genealogy and family history. It’s actually a lot like a trip to the House of Mirrors or the “Ye Olde Fun House.” It’s one of those things that occur when you’ve examined someone’s life but find there’s something that you still can’t quite resolve. I mean, it’s not exactly a brick wall – as everything else about the subject’s life in question will look “just fine” – “but.” Really, all the pieces of the puzzle go together perfectly … or do they? It seems that there is always one piece of the puzzle that doesn’t fit quite right.

So we genealogists dance around the puzzle. For me, I like to use words and phrases like “probably, likely, could-a-been, might-a-been,” and my all time favorite, without a doubt. We might even build a sketch of the person’s life, ever careful not to disturb the tenets of our research, all the while practicing a little bit of the X Files mantra that “the truth is out there.” And then we “swat at it” (our genealogical problem/issue, that is), much like flies in summer time, as the issue or flaw in our genealogical research/argument never really goes away. (It just needs a good dose of bug-spray…)

Regrettably, this has happened to me more times than not. One of my “better cases” (in this regard) has been my study of (and gathering of facts for) the life of my great-great-great-grandmother, Lucinda (Russell) Sage.[1] Now, Lucinda has always been one of my “favorites.” Born 14 September 1798 in Connecticut to Roswell Russell and Elizabeth Carrier, Lucinda has carried the “double witch gene” on down to my mom and later generations. Lucinda’s mother was a descendant of Martha Allen Carrier, and her father was a descendant of Rebecca Towne Nurse, two of our ancestors accused and hanged at Salem in 1692. Lucinda is not only my lifeline to the Salem Witch Trials, but as an added bonus, the lovely and talented Lucinda was (like my own daughters) a twin – to her equally lovely sister Lavinia. I have to tell you that, as the father of twin girls, this has been a fun (if not relatable) aspect in “the telling” of the “witches” stories to my kids.

And by and large I haven’t had any problem with Lucinda’s lines. She shows up just like she should in Descendants of David Sage, and is a notable entry in Descendants of William Russell of Cambridge. All the ‘vitals’ look good, with all the census records looking ‘reasonable’ (census records being intrinsically rebellious things) in connecting the dots from me to Grandma Lucinda. That is, except for one – one lone death certificate – one making it all near impossible to resolve. 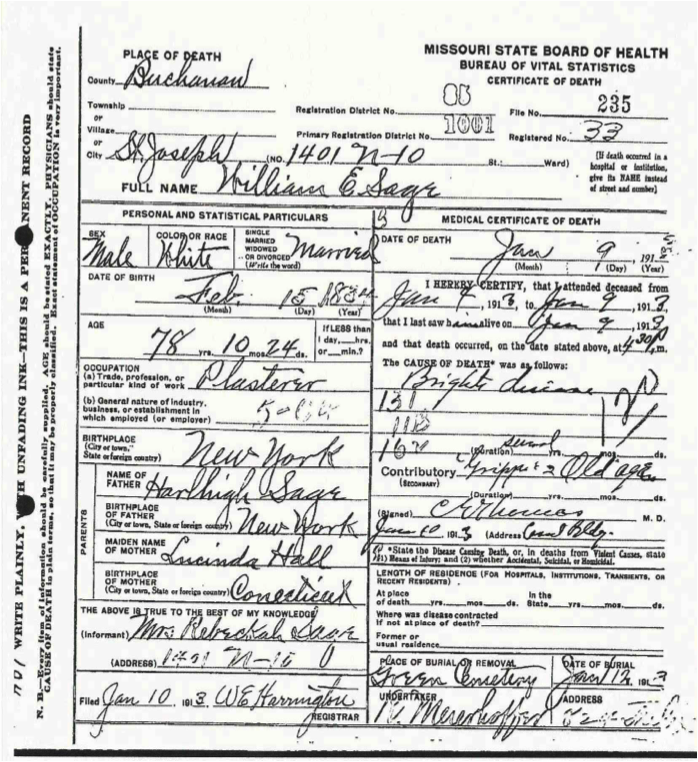 There, under the area for “MAIDEN NAME OF MOTHER” it says “Lucinda Hall.” Okay, there’s only one expression that works well here, and that is: What the heck?! Who is “Lucinda Hall??” In seeing this, I went through my usual litany of questions: Do I have the right Lucinda Sage? (Believe me, there are a mess of them) Do I have the right Harlehigh Sage? (So many ways to spell this name and, again, so many Sages called “Harlehigh.”) Do I have the right William E. Sage? The problem was, in the absence of any other evidence – I did.

Did the boys have different mothers, both named “Lucinda”? (Hey, it happens.)

So I didn’t reconcile the name. I left it alone. It didn’t fit – and admittedly, I didn’t want it to. Whoever “Lucinda Hall” was, well, she was trying to cause me problems back in Salem and in 1692. I compared William’s younger brother John Sage’s death certificate to William’s. No problem. It said his mother’s name was “Lucinda Russell” just like it should have. Did the boys have different mothers, both named “Lucinda”? (Hey, it happens.) And who was this “informant” on William’s death certificate? “Mrs. Rebecca Sage?”[2] As William’s second wife, she seems to have been a bit of a “late comer” to the party. What the heck did she know? So, my friends, it simply stayed that way with Lucinda (Russell) Sage’s “Salem 1692” ancestry regrettably, “asterisked by the informant.”

Then, recently, a strange email arrived out of the blue. A lady was writing to me with information about Lavinia – Lucinda’s twin. Now, like an idiot, I hadn’t paid much if any attention to poor old Lavinia. The lady who wrote to me said that Lavinia went by the nickname “Lovina” and that she had been married to a ne’er-do-well sort of man. Sadly too, Lovina’s life had been a short one, and it’s unclear if she had any children. Lovina died shortly before her forty-second birthday, on 27 August 1839. (Her sister Lucinda lived to be about 90, passing away on 13 August 1889.) However, for me what was most interesting about Lovina was not so much her all-too-brief life – but rather the name of her husband – Mr. Daniel Hall.

Now I’d like to take credit for what I’m about to tell you, but honestly I can’t. Serendipitously, a descendant of Mr. Hall and his third wife is the one who solved this riddle and cracked the case. You see, Mr. Daniel Hall was quite the gadabout and was married five times – no big deal on the surface right? (Well, I’m sure you’ve figured it out by now.)

As you probably have guessed, Daniel Hall married twin sisters! (Cuz that’s so normal!) He married Lavinia “Lovina” Russell as his second wife. And when Lovina died in 1839, he married in 1847, as his fourth wife, her widowed twin sister Lucinda Sage – widow of my great-great-great grandfather, Harlehigh Sage. (Daniel had married his third wife Elizabeth Duncan after Lovina died.) Lucinda must have woke up and smelled the coffee, though, finding marriage to her sister’s “ex” wasn’t the joyful bliss she’d hoped for. And, thus, a divorce was granted to Mrs. Lucinda Sage from Mr. Daniel Hall just two short years later, in 1849.[3]

I guess Daniel was just one “busy” dude – and it kind of looks like he had a thing for sisters, too. You see, in addition to the Sage sisters Lovina and Lucinda, Daniel’s first wife Sabrina Nocks and his fifth wife Margaret Nocks were also sisters. (I won’t mention that the Nocks family and the Sage family had been inter-marrying for awhile.) So, seeing as Grandma Lucinda never again remarried after her brief nuptials with Mr. Hall, her legal name was indeed, at the time of her death, “Mrs. Lucinda Hall.” Her daughter-in-law Rebecca (probably grief-stricken) incorrectly reported this as Lucinda’s maiden name. However, Lucinda had truly already taken steps to correct the situation herself. You see, she was pretty clear as to what she felt her name was when she left instructions for it to be carved on her tombstone: “Lucinda, wife of Harlehigh Sage.”

[3] From the family notes and research of “Rae M,” a descendant of Daniel Hall: “To Lucinda (Russell) Sage, the widow of Harlehigh Sage and sister of Lavinia (Russell) Hall, a divorce was granted from Mr. Daniel Hall, 22 Oct. 1849.”