Later this year, I will be giving a talk as part of Salem Ancestry Days in Salem, Massachusetts, entitled “Remember, Remember: Exploring Salem’s Mayflower Connections.” While Salem was only 80 miles north of Plymouth, the two early settlements had very little interaction. Still, there were at least four Mayflower families with a connection to Salem:

Of the four families, only Richard More and the Allerton family are known to have left descendants in the Salem area. For Allerton, all descend from Isaac’s daughter Remember. Thus, my title is obviously a play on her name, which I first thought of when a colleague told me about a plaque in Salem that reads “This land was once owned by Richard More[,] the only Mayflower passenger to come from Plymouth to Salem.” I immediately thought of Remember. Now, I do not believe any records have her living in Salem directly. Her husband Moses Maverick was a freeman at Salem in 1634, but by the following year he was a freeman at Marblehead. Moses and Remember married before 6 May 1635. While they lived in Marblehead, they attended church in Salem, and eight of their nine children were baptized there.

…Remember is (by marriage) a distant great-aunt.

So, while I encourage anyone with interest in Salem and the Mayflower to attend this talk, this post will now take a shift to the family of Remember’s husband Moses Maverick. I learned relatively recently (as a result of posts I had written here and here), that I descend from Moses’s parents, Rev. John Maverick and his wife Mary Gye, so Remember is (by marriage) a distant great-aunt. Rev. John Maverick (1578–1636) was the first minister of the First Parish Church of Dorchester in 1630. His wife, Mary Gye, has a documented royal line to Henry III, King of England (who died in 1272).[2]

A lesser-known member of the Maverick family was the young Samuel Maverick (1753–1770) of Boston, one of the five victims of the Boston Massacre. As Boston recently commemorated the two-hundred-and-fiftieth anniversary of this event, it gave me a chance to research the genealogy of my distant kinsman. Also of note was Samuel’s brother-in-law, Ebenezer Mackintosh (1737–1816), an organizer of the colonial anti-Catholic holiday Pope Night, who united Boston’s North and South End gangs in protest against the Stamp Act of 1765, and later claimed to be an active participant in the Boston Tea Party.

Probably the most identifiable association of the Maverick family is Samuel Augustus Maverick (1803–1870), a Texas lawyer, politician, land baron and signer of the Texas Declaration of Independence, who is the source of term “maverick,” first cited in 1867, meaning “independently minded.” His son Samuel, Jr., grandson Maury, and great-grandson Maury, Jr. were all significant figures in Texas as well.

How the Texas Maverick family is descended from Rev. John Maverick is still unknown. William Prescott Greenlaw wrote a serial article in the Register, tracing many descendants of Rev. John Maverick, with several branches going to Barbados, and could not determine exactly how Samuel Augustus Maverick’s great-grandfather, Samuel Maverick (ca. 1715–1799) of Charleston, South Carolina, descended from the early New England family. Greenlaw concluded they were descendants of Rev. John and Mary (Gye) Maverick, and listed five candidates for the ancestral connection, and that the South Carolina Mavericks probably came from Barbados.[3] Amazingly, there is not a Maverick group project on FamilyTreeDNA.

The charts below outline these well-known Maverick descendants (as well as my own), and the two Maverick spouses, Ebenezer Mackintosh and Mayflower passenger Remember (Allerton) Maverick. So please remember my Aunt Remember and all of these other Mavericks! 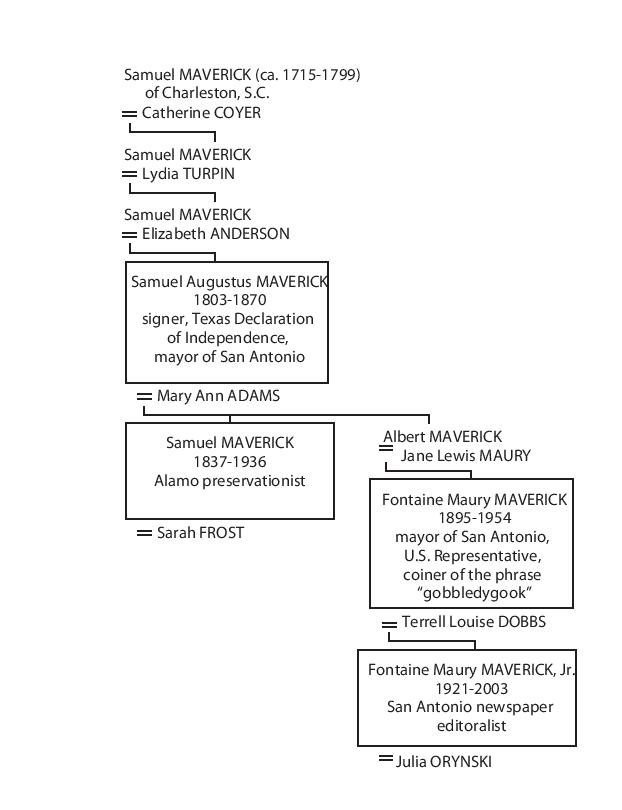 [1] Christopher Challender Child, “The Search for Elizabeth2 Turner, Part One: An Annotated List of the Salem Church Records, Mayflower Descendant 64 [2016]: 151-73.

20 thoughts on “Remember the Mavericks”