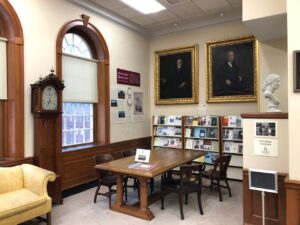 As one of the few remaining staff members from NEHGS Sesquicentennial in 1995, I thought I would share my memories as we celebrate the next quarter century. My journey at NEHGS began in 1986, as a high school student. I would make frequent visits to research my New England and Atlantic Canadian ancestry at 101 Newbury Street. An article about my research as a “Student Member” appeared in the NEHGS news magazine NEXUS (the acronym for New England Across the U.S.) in 1987. Later that year I would meet my future bride Anne-Marie and we both traveled into Boston to research together.

A few years later, in 1993, I was making more frequent trips to the library because the company I worked for had gone out of business and I was taking on client work for extra income. I learned on one visit from Gary Boyd Roberts that there might be a part-time opening in the Enquiries Service (today’s Research Services). The group was headed by Dr. Neil Bowman Todd of Newtonville, an expert on cat genetics, English tokens, and, of course, genealogy. In 1993, the Enquiries Service was located in the confines of a small space located in the southwest corner of the reading room on the seventh floor. We had an “L” shaped table, a few folding chairs, a microfiche reader, a typewriter, and no computers whatsoever.

In 1993, the Enquiries Service was located in the confines of a small space located in the southwest corner of the reading room on the seventh floor.

Research was conducted for members and non-members, the non-member rate being $25.00 per hour in those days. The staff were contract genealogists with no employee benefits. I was delighted when the following week I was hired for an opening in the Circulating Library, headed by Bridget M. Knightly. The NEHGS Circulating Library offered members the opportunity of borrowing some 25,000+ titles. The collection reflected approximately ten percent of our permanent collection. This mini-library was located in what is now the Microtext Library on the fourth floor at NEHGS.

We received dozens of carbon forms in the mail each week that included the top selections the member hoped to rent from NEHGS. We would pull the orders of books, microfiche, and microfilm, and John Phlo (our shipping and receiving clerk) would box them up and mail them around the globe. Long before the popularity of the internet and online PDF-format searchable books, this circulating library was a very popular service for NEHGS members. As technology progressed, the need for a circulating library collection would eventually vanish and the collection was sold.

In the early 1990s, not many of the staff owned home computers. From school days in the 1980s I had owned one sort of computer or another, and was even used to going online for genealogical research. In this era of technology genealogists online used Bulletin Board Systems (or BBSs) by dialing up with a phone and a modem to a telephone-connected computer terminal on the other end. After logging in the user could upload and download files, read, and participate in online message boards and chat online. For a genealogist, this was an exciting time.

You could now post a message on your brick wall ancestor and someone around the world might see it!

You could now post a message on your brick wall ancestor and someone around the world might see it! With a home computer and online skills, I was transferred in 1994 to the Computer Department at NEHGS. The department consisted of myself and one other person. We handled the maintenance and tech support of the twenty-odd computers at NEHGS. By this point even the library had a PC computer for patrons with CD-ROMs of the FamilySearch database and a few other collections that were slowly coming out on disc. After my manager Donald MacDonald left the organization, I was given his position as Network Administrator.

In the summer of 1994, the Society announced that “NEHGS Goes On-Line with CompuServe.” By the fall of 1994 we were online and accessible to NEHGS members who had a CompuServe account. The following describes what I did besides fix computers once we introduced this new service for NEHGS members: “David A. Lambert of the Society’s staff will be on-line daily to answer questions about membership services, disseminate publicity about the Society and its many programs, answer questions from members and non-members, and take orders for memberships, publications, and the Circulating Library via electronic mail. It should be emphasized that this availability is a first step into the on-line community. Research by the Enquiries Service can also be commissioned on-line and charged to MasterCard or Visa. Computer access to NEHGS collections is still some years away.”

I can still remember the excitement in the building when I created the first online image for our members to access – a downloadable image of the NEHGS logo from 1845! Within the next year or so, we would commission the first NEHGS website at a cost of around $5,000. Our first website at www.nehgs.org was little more than a bulletin board system to announce the activities at NEHGS. Needless to say, we have come along way when you take into consideration more than 1 billion searchable records on AmericanAncestors.org.

It has been an honor to have been part of NEHGS for 27 years now. When I began at NEHGS we had scarcely twenty-five employees. I look forward to my next quarter century at NEHGS with a staff of more than 100 colleagues.

11 thoughts on “From the age of dial-up”