Large, dusty, and certain to leave an indelible brown smudge if allowed to touch your clothing, handling the fourteen volumes of Albany County, New York Deeds, 1630-1894 was my first assignment after I became an NEHGS volunteer in 2005. With ancestors who settled near Fort Orange (present-day Albany) in 1650, I had a personal interest in helping to bring this collection to a broader audience. These early land records represented some of the few city and county records that had not been destroyed or damaged during the disastrous 1880 fire at Albany City Hall.

I was just one of several who scanned the volumes, after which the page images were turned over to other volunteers to index the names associated with the 302,300 land transactions. Even with many hands helping, it took a couple of years to complete this one project. It was my first experience with how well NEHGS was able to harness the power of each volunteer in a unified effort to create new databases for AmericanAncestors.org.

In 1845, the Internet was not on the minds of the NEHGS founders as a handful of paid staff struggled to run a growing library while also recruiting and corresponding with members. Even then, the organization depended on volunteers to serve on its governing board, help with fundraising, and locate book and manuscript donations. Our trustees and councilors continue that work today, now supplemented by interns and volunteers who repair and catalog books, proofread publications, process manuscript collections, assist with research, scan items into the digital archives, create website content, and myriad other projects.

Over the last 175 years, there have been countless NEHGS volunteers who have contributed to our mission, but one stands out in my mind for his efforts to “rescue” an important research source, the Massachusetts vital record indices. These indexes to statewide records, held at the Registry of Vital Records and Statistics, covered the years 1901–1950 (births and marriages) and 1901–1980 (deaths). The lists of names were generated on computer printouts, then bound by canvass or metal bindings. Constant use left many volumes with weakened bindings and torn or missing pages. By 1990, with no funds to reprint the indices, the Registry was faced with restricting public access or risking the continued slow destruction of the volumes.

Over the last 175 years, there have been countless NEHGS volunteers who have contributed to our mission, but one stands out in my mind for his efforts to “rescue” an important research source, the Massachusetts vital record indices.

Enter Dr. Neil B. Todd, a volunteer (then called Friend of the Library), who helped to identify NEHGS library books that were judged to be in poor condition for “photoduplication.” If the book was no longer under copyright, it would be photocopied on acid-free paper, given a library binding, and placed back on the shelf for patron use. Neil became aware of the deteriorating condition of Registry indices and thought photocopying could be the key to preserving them. With the help of (then) NEHGS Director Ralph Crandall, Neil successfully lobbied the Supervisor of Public Records to allow the duplication of the Massachusetts death indices. After a formal agreement was signed in May 1991, work began to produce two sets of indices: one for NEHGS library use and the other for the Registry of Vital Records.

The project was lengthy and the work laborious. On Friday afternoon, a few index volumes would be picked up from the Registry and brought to the library. There, volunteers and staff would race to dis-bind and copy the pages before the books had to be returned, ideally by Monday morning. NEHGS Chief Genealogist David Allen Lambert recalls that “some of the metal bindings could only be removed by cutting through them with a reciprocating saw!”

For the initial photocopy, the 12” x 16” computer printouts were reduced by 64% in order to fit on letter-size paper. After creating a master copy of each page, touch-ups were made using white correction fluid to help mask imperfections. Where a page was torn or text missing, it necessitated a visit to the Massachusetts State Archives where a substitute could be printed from the 1974 microfilm copy of the index. The last step was to print two sets of pages from the master copy and send them off to the book bindery. 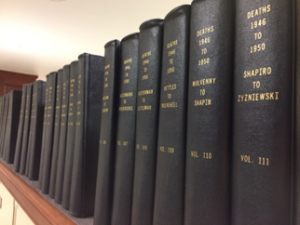 With Neil leading the effort, volunteers pledged over 500 hours to accomplish the preservation project. NEHGS and the Friends of the Library solicited donations to help defray expenses. The labor was free, but it cost $5.00 for one ream of acid-free paper and $10.00 for each hardcover library binding. One can only imagine how much toner was used in the photocopier. By the time of the 1995 NEHGS Sesquicentennial, 97 volumes of the death indices had been produced and work was already underway to “rescue” the birth and marriage indices. Photocopying a few at a time, it took nearly 10 years to complete two sets of the indices, more than 600 volumes.

At the 1999 NEHGS Annual Meeting, Neil Todd was honored with a Lifetime Membership for his fifteen years of volunteer service and personal efforts to preserve the Massachusetts vital record indices. Neil remarked that he was “tickled to death” by the recognition. Truly a shining example of the power of one volunteer to make a lasting contribution to genealogical research.

3 thoughts on “The power of one volunteer”