While William Bradford himself never delved into the life of my ancestor (and Mayflower passenger) Francis Billington, the same is not true for Francis’s father John Billington. He appears in several items in his ten years in Plymouth, nearly all in a negative light. He was brought before the Plymouth Company in March 1621 and charged with “contempt of the Captain [Myles Standish]’s lawful command with opprobrious speeches: for which he was adjudged to have his Neck and Heels tied together: but upon humbling himself and craving pardon, and it being the first Offence, He is forgiven.” In 1624, he was an outspoken supporter for Rev. John Lyford and John Oldham in their revolt against William Bradford and the rest of the Leiden contingent and the authority of the Plymouth church, but denied any involvement when brought up on examination.[1]

Bradford wrote to Robert Cushman on 9 June 1625 that “Billington still rails against you, and threatens to arrest you, I know not wherefore; he is a knave, and so will live and die.” (Cushman died before this letter arrived.)

Of course, what Billington is most known for is killing his neighbor John Newcomen in 1630 and being the first English person executed for murder in New England.[2] Bradford wrote to John Winthrop, governor of Massachusetts Bay Colony, for advice on the matter (see below). Billington was executed to set an example. 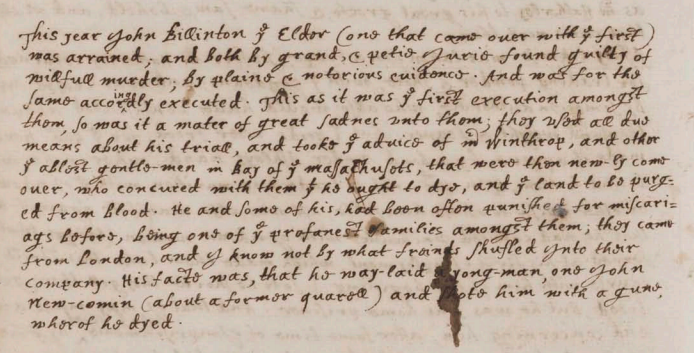 Years ago I met a fellow descendant of John Billington, who told me, facetiously, that John Billington’s death was really the fault of Dr. Samuel Fuller, since, as the doctor, he should have been able to save John Newcomen from the gunshot wound, and thus Billington would not have been executed. Interesting ….

Of the 24 Mayflower families that left American descendants,  the Billington family is one of twelve in the ancestry of American presidents.[3] In a touch of irony, John Billington, himself executed for murder with a gun, is the ancestor of President James Abram Garfield, who was assassinated with a gun in 1881. Of all the presidents descended from Mayflower passengers, Garfield is the only one who had a violent death by gunshot.

[2] An execution of an unnamed English person had occurred earlier in 1623 in the English settlement of Wessagusset (Weymouth), after an English settler was caught stealing corn from local Native Americans. The unnamed man was purportedly offered to the Native Americans, who “declined to receive him, upon which his [English] companions hung him themselves in their sights.” Charles Francis Adams, Wessagusset and Weymouth (1904), 17, and Legal Executions in New England: a comprehensive reference, 1623-1960 (1999), 5.

16 thoughts on “The first execution”