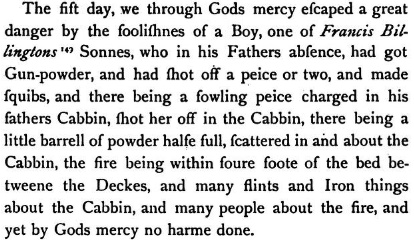 Had the ship actually exploded, our history would have been vastly different. Francis Billington largely flies under the radar after these two interesting anecdotes in the first months of the Pilgrims’ arrival. In 1634, he married Christian (Penn) Eaton, the widow of fellow Mayflower passenger Francis Eaton, who had died a few months earlier, leaving her with four young children. Christian herself came alone on the Anne in 1623. Francis and Christian (Penn) (Eaton) Billington had eight children together. In 1669, they moved to Middleborough, Massachusetts, where Francis was granted land as one of the “First Comers.”

Dorcas Billington, the second youngest child, married Edward May and was the subject of an article I wrote in 2013 in the Mayflower Descendant, sorting out which of Edward May’s children were by Dorcas and which were by an earlier wife.[1] My own ancestor is Francis and Christian’s eighth and youngest child together, Mercy Billington, born 25 February 1651/52; Mercy and her husband John Martin are also the ancestors of U.S. President James Abram Garfield (1831–1881).[2]

My final story about my Billington ancestors will be the story for which they are certainly the most well-known.

1 thought on “A foolish boy”