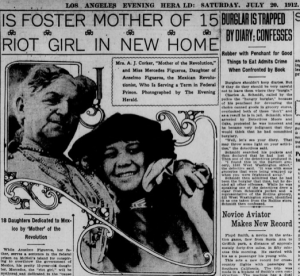 The newest issue of American Ancestors magazine prominently features women: how to trace them, their accomplishments in the field of genealogy, and even their role “hiding in plain sight” with infants in early photographs. It seems appropriate, therefore, to share something surprising that I discovered this past summer about one of my great-great-grandmothers.

I have spent countless hours tracking down genealogical material in old newspapers, but in this case, exciting information was handed to me on a virtual silver platter through a hint on Ancestry.com. It was a short notice in the 20 June 1911 issue of the Nevada State Journal, with a dateline the previous day in Los Angeles: Mrs. A. J. Corker had posted $5,000 bond with another woman, releasing from custody Ricardo Flores Magón, “alleged head of the revolutionary junta in this city, which has been credited with promoting the Liberal movement in Lower [Baja] California.” It also related that my ancestress was “a member of the socialistic defense committee.”

From Wikipedia, I learned that Cipriano Ricardo Flores Magón (1874–1922) was “a noted Mexican anarchist and social reform activist,” and that his brothers Enrique and Jesús were also politically active. There is even a term for the followers of the Flores Magón brothers: Magonistas. Of course I wasn’t going to just leave things there. I had to see whether there was anything more to uncover … and indeed there was.

There is even a term for the followers of the Flores Magón brothers: Magonistas. Of course I wasn’t going to just leave things there. I had to see whether there was anything more to uncover … and indeed there was.

The following June, Enrique and Ricardo Flores Magón were put on trial for violating U.S .neutrality laws, along with Librado Rivera and Anselmo L. Figueroa, publisher of the newspaper El Regeneracion. During their trial, three young women physically and verbally attacked a witness in the corridor, calling him a spy and coward. They were Helen Luevano; Lucile Norman, step-daughter of Ricardo Flores Magón; and Mercedes Figueroa, daughter of Anselmo Figueroa. The three young women were cited for contempt of court, and Lucile and Mercedes then went on – joined by three other women – to incite a riot following the 25 June sentencing of the men!

On 19 July 1912, the Los Angeles Herald published news that 15-year-old “riot girl” Mercedes Figueroa had been taken in by Aurelia J. Corker following her release on bail, and that the elderly woman planned to adopt her. The next day’s issue of the same paper contained a front-page article featuring a photograph of the two women, and noted that Aurelia was foster mother for fifteen girls already and had posted bond for all of the “so-called rioters.” While the quality of the newspaper photograph isn’t terrific, I’m excited to finally have a picture of this ancestress (only two of my great-greats now remain faceless).

The article concluded with this paragraph: “The fame of Mrs. Corker’s kindness to motherless children has spread far and wide among persons of her belief, and in many languages she is spoken of as ‘the little mother of the revolution.’”

Wow! Nothing I’d learned, either from my family or from previous research, had hinted that my great-great-grandmother had been a major figure in California’s Socialist-Labor party and an ardent sympathizer with Mexican revolutionaries. But once I started looking, I found all kinds of articles detailing her exploits, both a personal arrest in 1908 (for addressing a crowd on public streets without a permit) and frequent bond-posting for others.

[Once] I started looking, I found all kinds of articles detailing her exploits…

There were a couple of ironies in all this that quickly sprung to mind. One was that Mercedes Figueroa must have felt quite at home with her new adoptive mother, who lived at 237 North Figueroa Street. The other was that – quite unbeknownst to anyone at the time – the late mother-in-law of Aurelia Corker’s youngest daughter had been a goddaughter of Manuel Garfias … a nephew of the Mexican president whom Aurelia’s friends and associates had fought to overthrow!