Jennica Bayne joined the Research Services team in 2019. In addition to Colonial New England and Eastern Canadian settlers, her personal research interests include early Quaker settlers of Virginia and North Carolina, their connections to the Underground Railroad, and their interactions with the Cherokee Nation, specifically the Eastern Band Cherokee. Jennica has a passion for data analysis and inheritance patterns, and she is proficient with a wide variety of genetic assessment tools and visual mapping techniques. View all posts by Jennica Bayne →

The Committee is chaired by Ryan Woods, Executive Vice President and COO at NEHGS. Woods follows in the footsteps of his kinsman, Henry Ernest Woods, who was chairman of the Committee on Heraldry from 1890 to 1911. Today, the committee of twelve meets three to four times yearly, and is charged with reviewing applications and registrations of coats of arms for Americans. These include both historical and modern coats of arms. END_OF_DOCUMENT_TOKEN_TO_BE_REPLACED 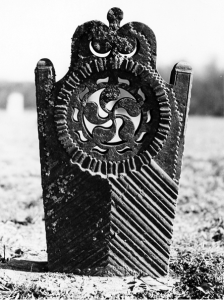 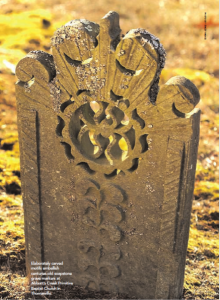 At the North Carolinian Piedmont, in the cemeteries of Davidson County, sunlight breaks through perforated soapstone, creating a lattice-like design in the shadows cast by the many tombstones. These grave markers are probably the earliest “pierced” gravestones in North America. END_OF_DOCUMENT_TOKEN_TO_BE_REPLACED

The decennial United States Federal Census often forms the backbone of historical research into an unfamiliar family member. By its nature, the census will never be fully comprehensive or exact, but it can serve as a bit of a guard rail, keeping us from going off on an unlikely tangent in our research.  Sometimes, though, those 10-year gaps between enumerations can conceal a whole lifetime of information – or in the case of my father’s family, many lifetimes. END_OF_DOCUMENT_TOKEN_TO_BE_REPLACED