This year, January 22 marked the beginning of the Lunar New Year, a holiday that is celebrated by millions of people from many Asian cultures around the world. The lunar calendar is based on the moon’s twelve phases, so the starting date changes from year to year. Each year is represented by an animal—2023 is the Year of the Rabbit. In honor of the Lunar New Year, I decided to write about my Chinese heritage.

My maternal grandparents were originally from the Kwangtung (or Guangdong) Province in China. My grandfather emigrated to Jamaica as a young man in the 1930s. He was part of a large wave of people who migrated mainly from the southern and southeastern parts of China between 1900 and 1940. 1 He first married while living in Jamaica, but his wife and their child sadly died during childbirth. He returned to China, where he met and married my grandmother. They moved to Jamaica shortly after and remained there for the rest of their lives.

Although I have always enjoyed hearing stories about my grandparents’ early lives, as a historian, I’ve longed to see some of their original Chinese records. Most of my research at NEHGS focuses on the United States, so I haven’t spent much time interacting with a lot of international resources. However, a few months ago, my mother acquired some of my grandmother’s old documents, including her marriage certificate and passport. They’d been packed away in a relative’s closet for almost two decades, so the prospect of finally being able to examine them and piece together a more detailed timeline of my grandmother’s early life excited me. 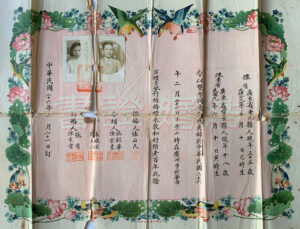 I was immediately intrigued by the marriage certificate. The intricate drawings of the birds and flowers immediately drew me in. I’ve viewed countless marriage records but cannot say that I have seen any with such beautiful designs. Though written in Chinese, the certificate also came with a translation stamped by the British Consulate General, as Jamaica was still a British colony at the time. Much of the information included is typical for a marriage record: date and place of marriage, names of witnesses, and birth information for the bride and groom.

I found the date formats particularly interesting and informative. My grandfather’s birth date is written as “10th Day 10 th Moon of the 29th Year of Kuang Hsu (1903).” I knew that the 10th Moon referred to the lunar calendar, but the year stumped me. After a brief search, I learned that Kuang Hsu referred to the era name of the Guangxu Emperor. He was the 10 th emperor of the Qing dynasty and his reign lasted from 1875 to 1908. I then realized that my grandfather was born in the 29 th year of Guangxu’s reign. Traditionally, years were numbered in reference to an emperor’s regnal year, or the year their reign started. The years would then reset with a new emperor. This calendar system remained in effect with the establishment of the Republic of China, which occurred in 1912. This is noted with my grandmother’s birth date, which is written as “10th Day 6 th Moon of 9th Year of the Republic (1920).” My understanding is that this system is still implemented in Taiwan for official purposes, but mainland China now uses the Gregorian calendar.

My newfound knowledge of China’s traditional calendar system has led me to think more about how my grandparents fit into China’s larger historical events. It’s also helped me paint a fuller picture of their lives. Examining these records has been enlightening as a historian, but also rewarding on a more personal level. It may be difficult, but I hope to continue some of this research in the future.

1 thought on “Rediscovering my Chinese Roots”