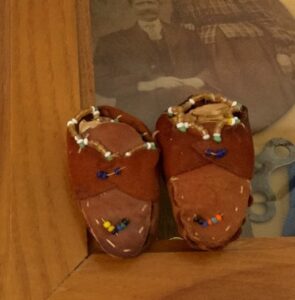 I recently read a New Yorker article about the complicated status of Black members of Native American nations, which stirred my memory and prompted me to research a Native American family I once knew.

Over fifty years ago on an autumn Sunday, I met formally with Chief BlackHawk of Tiverton, Rhode Island. My visit had been arranged through the chief’s sons, Algoma “Goma” Clarke (1926–1980) and Watacee “Tecee” Clarke (1934–1975), master carpenters who built my father’s office in 1964 and remained family friends. Tall and spare, with graying hair combed straight back and hazel eyes, Chief BlackHawk looked like he could have stepped out of an Edward Curtis photograph. He presented me with these booties, which I kept atop my bedroom dresser ever since, until they made their way into a display case with other cherished mementoes.

Goma Clarke once told me, “I am a Powhatan, a descendant of John Rolfe and Pocahontas.” He also said that he had ancestors who were enslaved Africans. Researching the story of the Clarke family has given me a distinct view of how race and identity were once recorded in American history.

Chief Blackhawk was born Robert Harvie Clarke in Occupacia, Essex County, Virginia, on 4 April 1884. His birth registration, with no first name, indicates that he was “colored.” Note how Robert’s enumeration in two United States censuses listed his race with no acknowledgement of his Powhatan ancestry:

Some time before World War I, Robert left the south and moved to Pennsylvania, where his draft registration card identified him as white. He married Virginia-born Captola Adkins in Philadelphia on 30 October 1924. In the 1910 census, she and her family had been identified as members of the Chickahominy tribe.3

As the young married couple journeyed northward from Philadelphia to New York City, then to Fall River, Massachusetts, they reclaimed aspects of their indigenous heritage. Robert became known as Chief BlackHawk, and Captola as Princess Snow Feather. They carried out roles that fulfilled expectations of how audiences imagined Native American life, not necessarily the historical reality. U. S. census records, once again, attest to the mixed identities which the couple inhabited.

Newspaper clippings provide snippets of their activities, such as a Wampanoag Annual Pow Wow which included “beating of the tomtom and a ceremonial dance.”7 Other examples include Chief Blackhawk presenting peace pipes and eagle feathers from his headdress.Perhaps the most lamentable headline in Chief Blackhawk’s public life comes through this Boston Globe headline:

W.P.A. Drops Indian Chief With “Aliens” and “Others”

Fall River, July 12—When Chief Black Hawk, full-blooded Powhatan Indian and a W.P.A. recreation project leader, tried to find out why he was dropped from the relief organization’s rolls the other day, he was told “that a few aliens and others were being dismissed,” it was learned today…

“When I left the W.P.A. office I felt like an Indian without a country,” remarked the chief with a smile.8

Chief BlackHawk died on 5 September 1979, aged 95, with little public recognition of his death. His gift to me of these booties, more than tokens of remembrance, have opened new avenues of research for families whose stories need to be rescued from obscurity.

14 thoughts on “Booties from Chief BlackHawk”