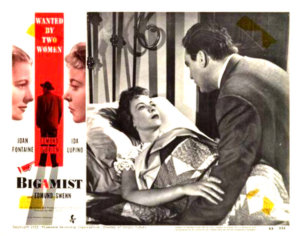 Groucho Marx:”Well, whaddya say girls? Are we all gonna get married?”

Researching the collateral relatives of my great-great-grandfather John Henry O. Record has brought a host of complicated characters. From “liars, whores, and thieves”[1] and murdering wives,[2] to throat-slashing cousins[3] and snake oil salesmen[4] alongside lawyers for the KKK,[5] to the accompanying tragedies of kidnapping and allegations of rape,[6] it’s no wonder that some of them ran off to join a traveling theater,[7] or, oddly enough (and contrary to all other indications), the police force.[8] Yes, my folks from Maryland’s Eastern Shore and the Del Marva peninsula were a colorful bunch to say the least.

As I’ve ‘traveled’ about their lives I wanted to keep an eye out for something or someone a little more … normal? Now, I wasn’t looking for a boring character; that’s not much fun. But when it comes to family history, it’s important to keep the story interesting for those whose eyes glaze over at the very mention of, say, census records. As I was getting shell-shocked by the gut-wrenching tales of all the murder and mayhem from the lives of my not-so-distant Eastern Shore kin I realized I wanted to find someone a bit more, say “mellow(?)” It was about then that I discovered the curious tale of my cousin Clements James “Ricords.”[9] 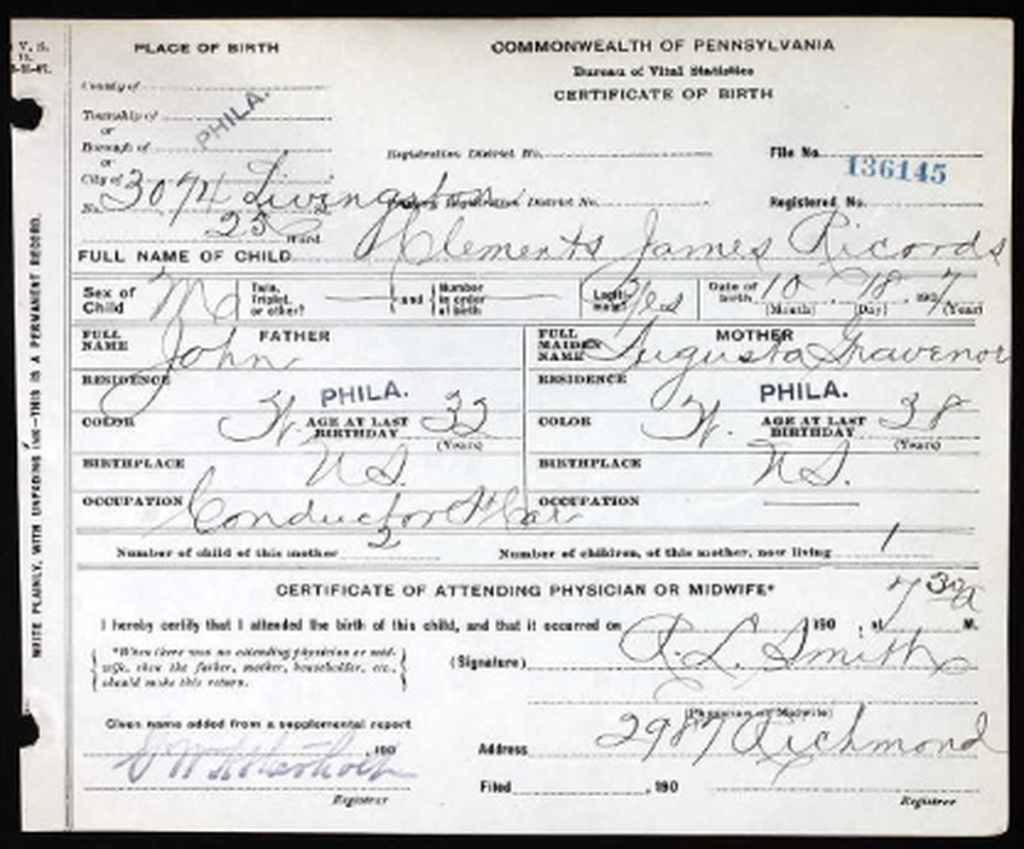 Clements James Records was the son of John Henry Records[10] and Augusta “Gussie” (Gravenor) Records.[11] Clements’ father John was likely named for his uncle John Henry O. Record,[12] my great-great-grandfather. The hero of our story, “Clements,” was born in Philadelphia, Pennsylvania on 18 October 1907. In this regard, Clements’ story started out normally enough. His parents were fairly standard-issue working-class early-twentieth-century “Philadelphians,” no doubt having escaped some of that Eastern Shore murder and mayhem along the way.

Tracking Clements was easy enough to do at this point. He’s living with his parents and his sisters in Philadelphia in 1920, and the announcement of his marriage to the lovely and talented Martha Strobel[13] is listed in the Philadelphia Inquirer on 8 September 1929. Clements and Martha are then enumerated at Philadelphia in 1930 living with Martha’s parents. Soon enough, and by January of 1932, Clements and Martha welcomed their new little girl, Myra Joan Records, into the world.[14]

And then it stops.

Family trees for Clements are a bit peculiar from this point on. Tracking his daughter Myra Joan Records with her three husbands and four children was easy enough to do. But almost immediately after birth Myra “quickly” became known as “Myra Joan Quick,” as she evidently shed her “Records” surname through her mother Martha’s apparent divorce from Clements and remarriage to Louis S. Quick, circa 1940. No, Myra Joan’s story is an interesting one, but hers is not the tale to be told here. While I can put the pieces together for Myra’s life and for Myra’s mother Martha (“Mrs. Quick”), I can’t say that much for her father Clements. You see, the dashing Clements Records is nowhere to be found.

It’s pretty evident when you study the family trees for Clements that Myra never did know what happened to her father. Unfortunately, Myra Joan Records passed away in 2019, and there’s been little in the way of changes to those trees. The information about Clements James Records just hangs out there in limbo. Family trees only reflect the ambiguity of what became of him. These trees don’t hint at any “living” person (he would be 113 years old), nor do they reflect any date or place for his death. In fact, the date of death for “Clements James Records” is usually listed as “about 1935” or “before 1955.” The truth, however, is that the man known as Clements Records just disappeared. 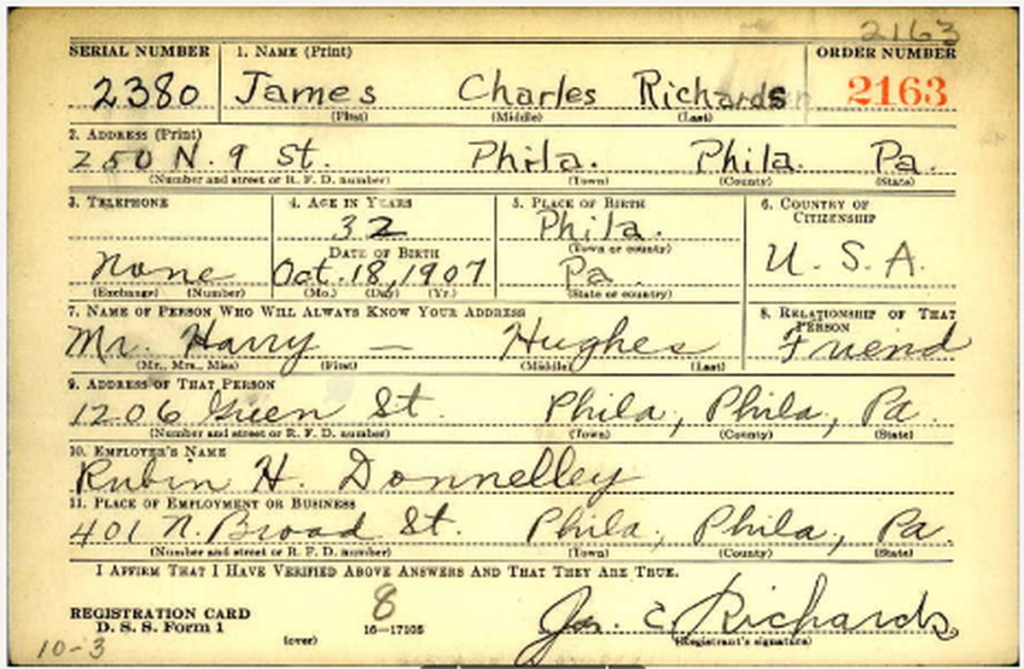 Now, I’d like to tell you that I am an amazing genealogical sleuth, but the truth is I just followed the prompts from an algorithm supplied by some mega-computer in Utah. It was curious to me that while I was researching the ‘records’ pertaining to Clements, I was redirected to a World War II draft registration card for some guy with the same birth date, that of 18 October 1907. This man’s name was “James Charles Richards.” Now, I know what you’re thinking: It’s super common for people to share the same birthday. What can I say? Something just felt fishy to me. About that time, I was prompted by said super-computer to look at a 1945 Virginia marriage license for that same Mr. Richards. The names of Mr. Richards’ parents look surprisingly familiar. While not perfect, the names of his parents looked a lot like Clements’… 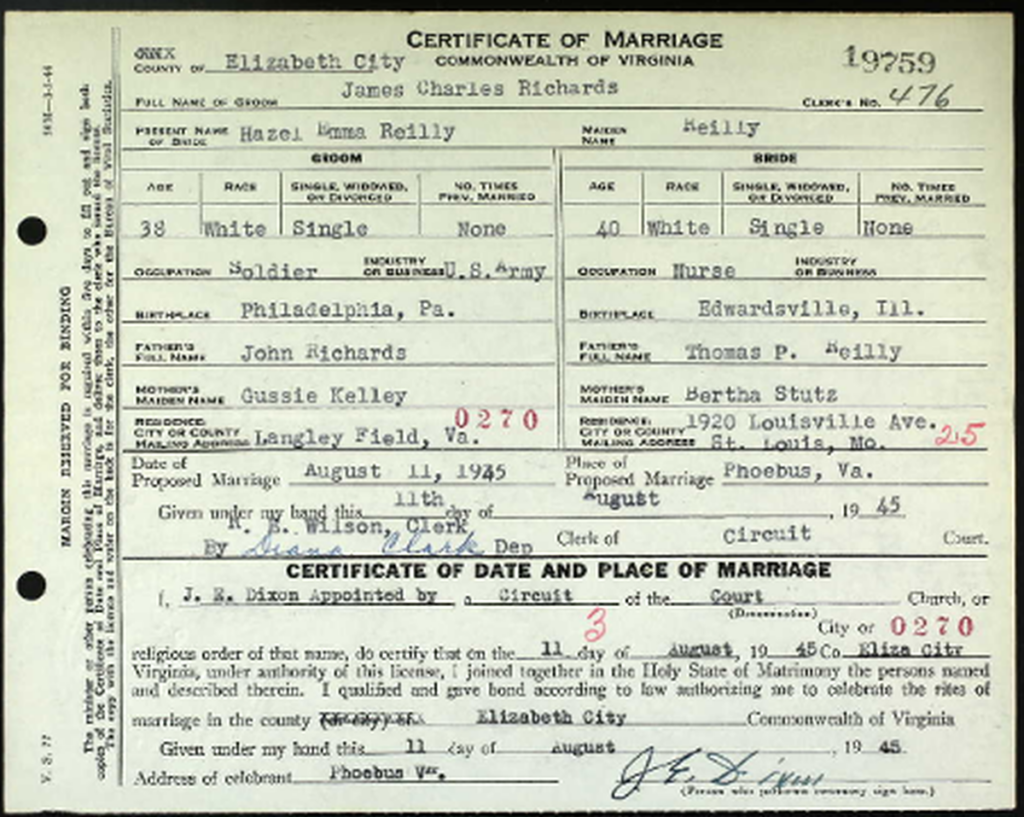 While this document only listed “an age at the time of marriage” for “James Charles Richards” (age 38), it was in keeping with a 1907 birth year. What was curious, though, was the names of Mr. Richards’ parents are listed as “John Richards” and “Gussie Kelley.” These names were way too close to Clements’ parents’ actual names, plus I have also seen my “Record” surname take on many forms. I knew, too, that Clements’ mother Augusta also went by “Gussie.” However, Augusta Records’ maiden name wasn’t “Kelly.” So how could I be sure? A quick check revealed that Augusta “Gussie” Records’ mother’s maiden name had been Belle Kelley. Hmmm … I’m starting to see someone covering his tracks here.

Now, just in case I haven’t said so, I’m not here to pass judgment on Clements. However, as information came in from assorted records reflecting a date and place of birth for “Mr. Richards” as 18 October 1907 in Philadelphia, and with parents named “John and Gussie Richards,” it was becoming pretty evident that “Clements James Records” had traded his identity in and become “James Charles Richards” instead. Clements, you dog! As evidenced by the “fabrications” in his 1945 marriage record to Hazel Emma Reilly, it looks like he was struggling to remember what lies he told, and trying to keep them straight. Changing one’s identity is never an easy task, though I daresay it was a lot easier in 1940.

Changing one’s identity is never an easy task, though I daresay it was a lot easier in 1940.

Okay, so we’ve established that Clements was a bit of a flim-flam man who we assume left his wife and daughter Myra and changed his name. On the surface, this is no big deal. (Really, Jeff??) Perhaps you could say that Clements didn’t want his ex-wife’s new “Quick” family tracking him down for child support? But then check out that marriage record where both “James Charles Richards” and “Hazel Emma Reilly”[15] are asked: “Number of times previously married?”  They both have the same answer: “none.”

In Clements’ case, you could almost say he was telling the truth. After all, he had a new “unbeknownst-to-anyone-else” fake name, so yes, “James Charles Richards” could say he was never married before. But what about the lovely Hazel Reilly? Well, she fibbed, too. You see, Hazel Reilly had actually been married twice before her “marriage” to “James Charles Richards.”[16] Oh, the tangled webs we weave.

I don’t know that you could say that Hazel was a bigamist herself. It’s presumed that she was divorced from her second husband Waldo Rutter, but it’s pretty clear that, like “James Charles Richards,” she lied on the marriage license. Not that this was such an uncommon occurrence. I’m sure it happened all the time. What’s different about these “misstatements” is that James Charles Richards may have still been married under “Clements Records” to the former Martha Strobel. If Clements and Martha were legally divorced, aside from child support, it begs the question as to why Clements James Records needed to change his identity at all? It also makes one wonder if Emma Reilly Rutter knew what was going on. Did she realize that the man she was marrying was, at best, using a pseudonym? Did she know that he had a daughter Myra back in Philadelphia?

Whatever happened here, Clements James Records did his best to have his alter ego James Charles Richards cover his tracks. (Clements had even gone so far as to register for the draft and fight during World War II using his “new” name.) In his 1950 application for veteran benefits, he once again stated his birth date and place as 18 October 1907, in Philadelphia. However, he states in his application that both of his parents are dead and that he has no living children. While this might have been true for his alter ego James Charles Richards, it certainly wasn’t true for Clements. Clements’ mother was deceased, but his father John Henry Records was very much alive and well – not to even mention his daughter Myra. 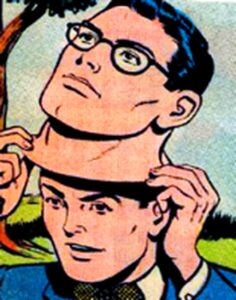 The only thing I can say is that people are complicated. It’s obvious that Clements Records walked away from his old life – all of it – from his parents to his wife and child, and all to assume his new identity as James Charles Richards. For whatever reason, he needed to escape, but in doing so he doesn’t seem to have given that family any closure. His father John Henry Records obituary doesn’t even mention his son Clements as either living or deceased. It’s as if he’d been dead to the family for years – although he was at the time of his father’s death still very much alive.

There’s no easy way to end this story of the alter ego. I do want to tell you that Clements James Records, under his guise as James Charles Richards,[17] was married to Hazel Reilly until his death in 1975. They never divorced, and Hazel never remarried. I guess they were able to keep the secret of his alter ego to themselves. They certainly kept it from his daughter Myra, as he took his happiness elsewhere, and his new identity with him to the grave. In the end, there would be no way to truly discern which man had led the life of an alter-ego.

[1] An old family expression of unknown origins. Is it possibly based in the truth?

[16] The Edwardsville [Ill.] Intelligencer, 28 September 1938, p. 3, announces the wedding of Miss Hazel Reilly to Waldo Rutter; U.S. Newspapers.com Index for marriage of Hazel Riley to Edward Spinnenweber at Alton, Illinois, 23 November 1921. That this is the same Hazel Reilly who later married “James Charles Richards” is confirmed in Hazel’s obituary, where it mentions her granddaughter [sic] Mrs. Melvin Pfeiffer (Cleon Spinnenweber, 1922-2003); see legacy.com obit for Cleon G. Pfeiffer, in which her father is named as Edward Spinnenweber and her mother as the former Hazel Reilly.