My father, Frank Dwyer, spent three happy years as a fellow in cardiology at the Rhode Island Hospital in Providence. It was a special treat when my mother brought me there for a visit. I remember being fascinated by the ashtray behind Dad—press a button and the cigarette butts disappeared! 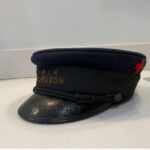 Since my father’s death in 2015, I have slowly dispersed some of his collectibles. This cap sat on his closet shelf for many years:

Someone gave it to Dad in the 1980s with the explanation that “R. I. H. Surgeon” of course stood for Rhode Island Hospital Surgeon. With its red cross, it was said to have been worn by an ambulance driver. So I believed. Wanting to find a new home for this cap, I thought it would make a unique birthday present for my college roommate, a Rhode Island native. But before packing it, I needed to do some homework. 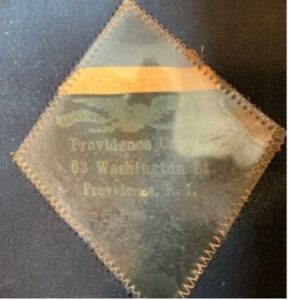 I guessed the cap was about a century old and hoped the inside maker’s label from Providence Cap Co. would sharpen the date.

As corroborated through city directories, Providence Cap Company on Washington Street dated at least back to World War II. Taking the label into brighter light, I deciphered, for the first time, the yellow typewritten name, Dr. Kalei K. Gregory. Who was the doctor who had worn the cap? Finding the answer took me into new research territory. 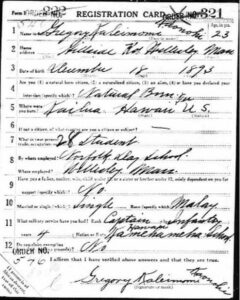 Kalei Koanohi Gregory, M.D. (1893–1986), a native of Kailua, Hawaii, first studied at the Kamehameha School in Honolulu, where he was counted in the 1910 census.[1] He then sailed to San Francisco in 1913 and next matriculated at Mount Hermon School. His World War I draft registration has interesting details. Other records at Fold3 indicated he served the nascent Aviation Corps during World War I.

Kalei Gregory’s entry in the Brown University year of 1923 certainly reflects stereotypes of the era:

Dr. Gregory married an English-born nurse, Maude Mary Abolit (1899–1987), whose parents came from Latvia. His medical career took him from the Providence Lying-In Hospital to a fifteen-year stint as assistant superintendent of the Charles V. Chapin Hospital. After World War II, he also taught at Tufts Medical School.

Gregory’s adoption of an Anglo surname, rather than the Hawaiian Kaonohi,  likely comes from being raised as a Congregationalist. A Honolulu newspaper article, published in 1939, lamented how many Hawaian names, like that of Dr. Gregory, had been transformed.[2]

Dr. Gregory traveled widely, leaving a bewildering documentation of his ethnicity from Chinese to Filipino! A newspaper article noted that in 1952, he visited his home in Kailua for the first time in 39 years.[3] 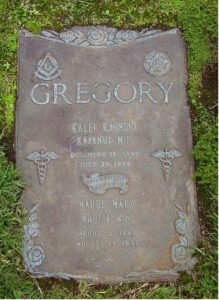 This remarkable physician came full circle and retired to Hawaii, where he and his wife are buried. His grave marker, adorned with a masonic symbol and caduceuses, reveals two cultures – with his Gregory surname as well as his native name.[4]

Back to the cap: Did Dr. Kalei Gregory ever ride aboard an ambulance for the Rhode Island Hospital? Perhaps in the early 1920s.

“Inside the Cap” gives my friend a birthday gift with the splendid series of accomplishments of its first wearer.

3 thoughts on “Inside the cap”