Elliott’s findagrave entry was fixed right away and now notes “He had no middle name, so any requests to add such will be declined.” One Wikipedia editor attempted to correct the error, although there was some initial pushback, citing that the middle name was included in the Encyclopedia of the Theodore Roosevelt Center, which I had not noted in my previous post. I decided to let the Center know about the error, and while they fixed it relatively quickly, Erik Johnson, the Center’s Digital Library Coordinator and Archivist, also told me that they had included the middle name based upon Elliott’s entry in the Library of Congress Name Authority File (LCNAF). This page was citing Elliott’s Wikipedia page (viewed in 2017, which I have since realized dates back to 2006), as well as a 2017 biography by Eric Burns – Someone to Watch Over Me:  A Portrait of Eleanor Roosevelt and the Tortured Father Who Shaped Her Life – which no doubt got its error from Wikipedia – ah, the circular roll of citations![1]

Fortunately, Erik gave me step by step instructions on how to notify the Library of Congress of their error and recommended the error report would be better served coming from myself, as I was more familiar with the evidence to argue the point. I did so and then a week later he let me know that he been keeping an eye of the LCNAF heading for Elliott Roosevelt and was happy to report that they had made the change I had recommended! The Center let me know that it is now in the process of updating its other records to match this more accurate heading. Indeed, I would recommend anyone interested in the Roosevelt family to check out the vast amount of information available at the Theodore Roosevelt Center.

On a related note, the links I had provided in my earlier post for Elliott’s 1883 and 1894 marriage and death certificates were through the Family History Library, for which you need to be at a Family History Center to look at the microfilm images. Following Danielle Cournoyer’s exciting post about New York Historical Vital Records now being free online, those records are available for free from anywhere (and in color!). Here is a link to Elliott’s 1883 marriage certificate. New York Historical Vital Records has yet to digitize Manhattan deaths for 1894, but here is the microfilm version of his death certificate: 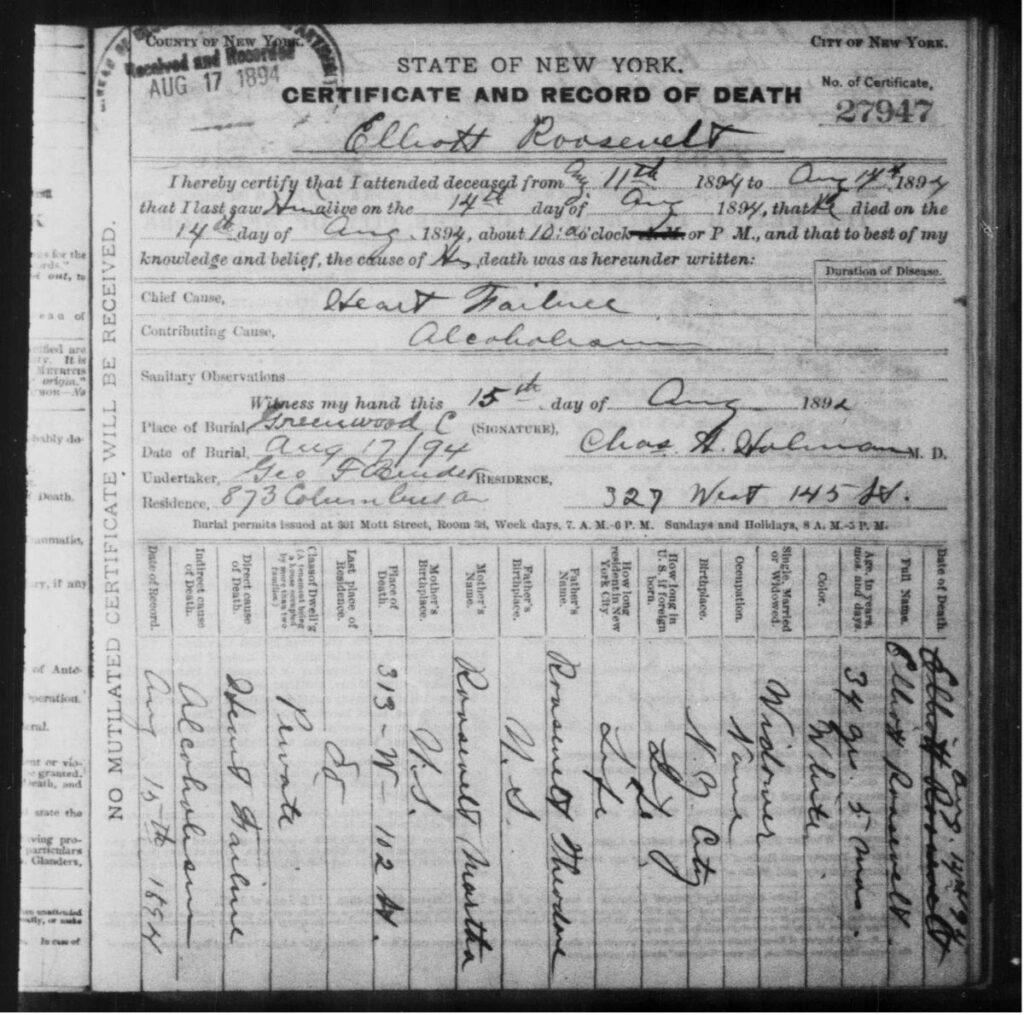 However, this death certificate revealed another issue about Elliott Roosevelt – his cause of death. His Wikipedia page claims he “attempted suicide by jumping out a window; he survived the initial fall, but suffered a seizure and died a few days later.” The cited source for this claim is the Emmy-award winning first episode of the 2014 Ken Burns miniseries on PBS – The Roosevelts: An Intimate History. The actual episode summarizes Elliott’s death slightly differently (at 1:11) – “On August 13th, 1894, suffering from delirium tremens, he tried to climb out a second floor Manhattan window, raced hysterically up and down the stairs, collapsed with a seizure, and died the following day.” This description is similarly stated in Doris Kearns Goodwin’s 2013 work, The Bully Pulpit, Theodore Roosevelt, William Howard Taft, and the Golden Age of Journalism, citing a letter from Elliott’s sister Corinne Roosevelt Robinson to their older sister Anna Roosevelt Cowles, dated 15 August 1894, held in the Anna Roosevelt Cowles Papers at the Houghton Library at Harvard.

However, the death certificate above attributes Elliott’s death to heart failure caused by alcoholism, and states that he was attended to by a physician from August 11 until his death on August 14. A contemporary newspaper account of Elliott’s death, while noting his past commitment to an asylum and that he had leased his Manhattan apartment under an alias, also made no mention of a suicide attempt or seizure, only that he “died at 10 o’clock last night at his home, 313 West One Hundred and Second street, after an illness extending over a period of only four days. Mr. Roosevelt took to his bed Friday. He has been ailing for some years and was not at all in a condition to withstand a severe illness, so that when taken down he quickly succumbed… Mr. Roosevelt died with only his valet and his physician, Dr. F. W. Holman [sic],[2] of 327 West One Hundred and Forty-fifth street, at his bedside.” An obituary in the New York Times also attributes Elliott’s death to heart disease.

I looked at the cited letter between Corinne to her sister Anna, which was written on all four sides of five separate cards, and refers to a telegram Corinne received from her husband Douglas Robinson providing the details of Elliott’s final days. The letter refers to Elliott having delusions after using stimulants again, and on Monday, 13 August  1894, Elliott “did jump out the parlor window.” The following day he “ran violently up and down stairs, suddenly stumbled, fully stiffened, and began to have one of those convulsive attacks. A man named Warren was there, I believe on business of the woman[,] got Elliott to bed, he was more conscious again. He breathed his last at 10 o’clock Tuesday night the 14th of August[;] William was with him, I am glad to say.”

Interestingly, the letter refers to Elliott being visited in his final days not only by his brother-in-law Douglas Robinson but by Elliott’s “uncle Irvine,” who would be his mother’s brother, Irvine Stephens Bulloch (1842-1898), a naval officer for the Confederate government during the Civil War and foreign agent in Great Britain on behalf of the Confederacy, who was denied amnesty after the war and spent his remaining years in Liverpool, along with his half-brother James Dunwoody Bulloch, who was the Confederacy’s chief foreign agent in Great Britain and was also alleged to have had a role in financing the Lincoln assassination plot. Theodore Roosevelt mentioned in his autobiography that two these two uncles visited him after the war under assumed names. I found a few later passenger lists listing Irvine Bulloch under his true name visiting the United States, as late as 1891, three years before his nephew Elliott’s death.

A widower at the time of his death, Elliott’s two surviving children with his late wife (Eleanor and Hall) were already in the care of his mother-in-law. Elliott also had a son Elliott Roosevelt Mann (1891-1976) that he fathered by Katy Mann, a servant employed by his wife. While Elliott Roosevelt’s life was cut short, the legacy of his daughter Eleanor is certainly timeless. I’m glad to see the restoration of Elliott’s correct name.[3]

13 thoughts on “An update on Elliott Roosevelt”