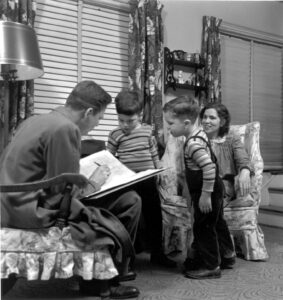 While the 1950 census was still in its planning stages, a primary concern of the United States Census Bureau was minimizing cost. Executing the 1940 Census had cost the federal government $67.5 million.[1] Not only had the U.S. population increased by 14% between 1940 and 1950, but the Census Bureau reported the cost of maintaining enumerators and clerks on the scale of the 1940 census would exceed previous expenditures more than twofold.[2] To offset higher costs, the Bureau eliminated “all but the most basic items” from the census schedules, asking 14 fewer questions in 1950 than in the decade before.[3] However, the 1950 census would ask a series of supplemental questions to a larger sample of the population compared to the 1940 census.

The 1950 United States Federal Census Form P1, Population and Housing Schedule, enumerated most households in the general population. Form P1 consisted of only 20 questions for all individuals versus the 1940 census’s 34 questions.[4] Even individuals recorded in Form P2, Individual Census Report (for military personnel and travelers); Form P4, Crews of Vessels Report (for those aboard U.S. commercial and military vessels); and Form P8, Indian Reservation Schedule, were often duly recorded in Form P1.[5] The National Archives and Records Administration did not microfilm the reverse side of Form P1, which documented information about housing units, and, unfortunately, the original schedules and punch cards have been destroyed.[6]

This census posed eight additional questions to a 20% sample of the population from each sheet, designated by a mark on every fifth line. Questions for these six individuals provided further information about their housing, nativity, and education level:

Ten years earlier, the 1940 census only asked supplementary questions of individuals recorded on lines 14 and 29, or 5% of the population. Thirteen supplementary questions asked of people 14 and older concerned the birthplaces of an individual’s parents, native language, veteran status, social security, and usual occupation. The supplement reserved three questions for married women: their age at first marriage, whether they had been married more than once, and the number of children they had.[7] 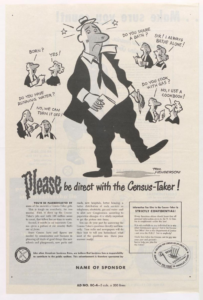 A few changes from 1940 to 1950 were related to postwar economic prosperity. In 1940, all persons aged 14 and older were asked to specify if they had worked for an agency arising out of the New Deal, like the Works Progress Administration (WPA), Civilian Conservation Corps (CCC), or the National Youth Administration (NYA). By 1950, respondents would not have been working for these agencies, as they were defunct.[8] In total, the 1940 questions about employment and 1939 income numbered fourteen.[9] By 1950, only those 14 and older in the sample population were asked income questions—though all persons 14 and older in the general population were asked about employment status, number of hours worked last week, occupation, industry, and class of worker.

As for features of the census that would end in 1950, this year was the last to use door-to-door census enumerators. The Census Bureau did test self-enumeration in parts of Ingham and Livingston Counties, Michigan, and Franklin County, Ohio, for 1950, but starting in 1960, all households would receive their decennial census questionnaires in the mail.[10]

To learn more about the ins and outs of the 1950 Census, please consider attending a FREE webinar on Thursday, April 14, 3:00-4:00 PM with Lindsay Fulton, Vice President of Research and Library Services. You can sign up here.

[4] National Archives and Records Administration. “Questions Asked on the 1950 Census,” retrieved from https://www.archives.gov/research/census/1950/questions-asked.

[10] National Archives and Records Administration. “Questions Asked on the 1950 Census,” retrieved from https://www.archives.gov/research/census/1950/questions-asked.