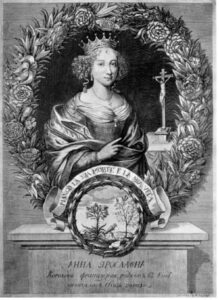 Anne of Kiev, or Anna Yaroslavna, was born just under one thousand years ago in Kievan Rus, present day Ukraine, daughter of Yaroslav the Wise, Grand Prince of Kiev, and his second wife Ingegerd of Sweden. She married King Henry I of France in 1051. Her marriage to the French king reflected the Catholic Church’s growing disapproval of consanguineous marriages; Anne’s father had already married some of his children to Western rulers in an attempt to avoid the Byzantine Empire’s influence. This marriage was also just three years before the East-West Schism between the Catholic and Eastern Orthodox church, so Anne and Henry’s marriage was one of the last dynastic marriages between the two disparate regions for some time. Anne and Henry had two surviving children, sons Philip and Hugh. Philip succeeded his father as King of France, and Philip’s Greek name has often been credited to his mother as deriving from Anne’s culture; it afterwards became a popular name amongst royal families of western Europe.

The simplified chart below (with most names anglicized) shows how Anne was an ancestor to not just all later monarchs of France, but later rulers of most western kingdoms. As such, nearly every immigrant to the present day United States treated in the first volume of Gary Boyd Roberts’s The Royal Descents of 900 Immigrants would also be descended from Anne of Kiev, a common connection to Ukraine for much of the western world.

[1] To see how Anne’s parents were ancestral to nearly all later tsars of Russia, both in the Rurik and Romanov dynasties, see here.