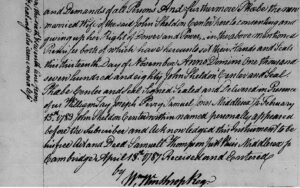 One of the wonderful things about genealogy is running into phrases and terms you have never heard before. It is a window into how people spoke years ago and teaches us about how our language changes over time.

There are a few sources that genealogists can reach for when encountering a phrase or word they don’t understand. When this occurs, I turn to Barbara Jean Evans’ A to Zax and Paul Drake’s What Did They Mean By That? A typical dictionary might not offer historical definitions of the terms you research, but these two have created dictionaries specific to genealogical research. All the terms are framed in the context of American genealogy, so you are sure to get the definition you seek.

I thought I would share some of the terms I commonly run into when I do genealogy. More often than not I find these terms used in deeds and probate records. These records are legal in nature and often contain impediments to understanding everyday speech, such as the regular use of Latin and boilerplate religious text. (Think about the first few paragraphs of a will where one commits their soul unto God, for example.) Once you get past this, however, you can see how people used to speak about themselves, their property, and their relationships with each other.

“yearly quit rent of one PeperCorn on the first day of March” – from a deed between John Penn Sr. and Jr. to Paul Everhart (see Westmoreland County, Pennsylvania Deeds, 1773-1886; Index. Viewed on FamilySearch.org). This deed represents a part of the breakup of a large property owned by the Penn family known as the “Proprietor’s Manor of Denmark” in Franklin Township.

Plat – an outline of surveyed land, usually of a single piece of property or a township.

Grass widow – an unmarried woman who has had a child.

Groop – a pen for cattle.

Messuage – a property with a dwelling house and usually a barn or other supplemental buildings.

Housewright – a carpenter who works on houses.

Shipwright – a carpenter who builds ships.

Wainwright – one who builds and repairs carts and wagons.

Tract – a piece of land OR a short book on a specific subject, usually religious.

Rights of dower and power – property a bride brings into her marriage. Sometimes seen written as “rights of dowery” (see image at right).

“And furthermone Phoebe the now married Wife of the said John Sheldon Center here to commenting and giving up her Right of Dower and Power.” – from a deed between John Sheldon Center and Aaron Tay dated 13 April 1787 (from Middlesex County, MA Record books of the registry of deeds, Middlesex County, Massachusetts, 1649-1900; indexes: grantee [1639-1905] and grantor [1639-1950], viewed on FamilySearch.org.)

Administrator – a person appointed by a probate court to settle the estate affairs of one who died without leaving a valid will.

Executor – a person named in a will to settle estate matters.

Administratrix/Executrix – a female named in these cases.

Flotsam – any material that floats and is cast overboard to lighten the load of a ship.

Deranged – in a military context, this is an adjective used to describe an officer who has had their unit disbanded.

Husbandman – a farmer who raised and bred livestock.

These are some of the odd or outdated terms that I often run into when reading historical documents. What are some interesting expressions you run into while doing genealogy?

20 thoughts on “What does that mean?”