Like most genealogists, I have a few brick walls in my family tree. I’m resigned to living with some of these mysteries after fifteen pretty solid years of work. One brick wall is a great-grandfather who seemingly appears out of nowhere in 1916 at age 21 when he enlists in the Army. Another big brick wall was, until recently, learning the town of origin in Germany for my paternal line. My research, which I had believed was thorough, came up empty time and time again for anything more specific than the “Kingdom of Hannover.” 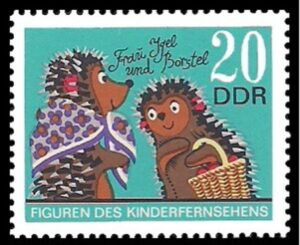 I had spent years googling and studying German Wikipedia searching for clues about my family‘s origins. Arguably the most interesting thing I learned about my surname came not from these endeavors but from giggles my passport elicited when reviewed by customs agents in Germany – it turns out I share a name with a young hedgehog in a children’s television program called Sandmännchen that originated in East Germany.

Almost as soon as I joined NEHGS I was taught the importance of pursuing both church and civil records. Previously I had thought it was more of an either/or situation. Not coming from a religious family, I had no idea of the full value of church records. However, after turning to them time and time again for research cases, I began to reconsider one of my own brick walls.

In particular, I had recently traced a Research Services client‘s ancestors back to Germany – on three different branches of his tree – thanks to information found in American church records. There were similarities between his family and mine, as all were German Lutherans who emigrated to New York City around 1850. While it was an achievement locating the towns of origins for his family lines, it also brought renewed feelings of frustration. Why had I succeeded for him where I had failed so many times with my own family?

The answer was simply my research strategy. For our client, I dove straight into American church records without thinking twice. We were lucky that some were digitized and searchable on Ancestry.com; the town of origin was written there in black and white. In another instance, an online index led me to the original document on FamilySearch.org where I found the key details: the parents’ places of birth were given in their youngest child’s baptismal record.

[With] renewed vigor, I attacked my own family as I would a case for a Research Services client.

So, with renewed vigor, I attacked my own family as I would a case for a Research Services client. I mentally drew up a research plan. First, review the civil marriage record from the city of New York for the name of the pastor. Next, research the pastor to learn what church he was associated with. Third, locate the records of that church and obtain copies of the originals. Determine if any children were baptized at the same church as the marriage took place. If all else fails, do FAN research.

I carried out all these steps and located a church marriage record and two baptismal records for my ancestors at St. John’s Lutheran Church in Manhattan. Though I had located the towns of origin in Germany for some members of the FAN network along the way, I was still at a loss for my own ancestors. Crawling around the Internet one night, revisiting pages I had been on many times before, I stumbled upon an index to baptismal records of Zion German Evangelical Lutheran Church in Brooklyn. I was immediately intrigued, knowing that I had relatives who were married there in the 1880s. Perhaps other events had taken place there, too.

I was in luck. This baptismal record index, it turned out, was the key to my long-sought-after answer. My immigrant ancestor had one more child after moving from Manhattan to Brooklyn in the late 1860s and she was baptized at Zion in 1873. I used the index information to order a copy of this baptismal record and found that, unlike the church records from St. John’s, which still only state the place of origin as “Hannover,” Zion’s pastor meticulously recorded the specific towns and villages from which his congregants came. I could now continue my research Germany and finally flesh out my paternal line.

Sometimes you have to take your own advice. Sometime church records really do hold the answers.

The winter 2022 issue of American Ancestors, which has a German theme, features a helpful article by Hallie Borstel on this topic: “Church Books & Civil Registration: Essential Records for German Genealogy.” Access the article here.

3 thoughts on “In praise of church records”