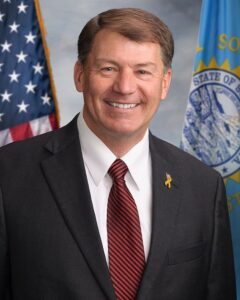 After reading a recent news story regarding Senator Mike Rounds of South Dakota, his name immediately caught my attention. I know two other men named Mike Rounds, and we are all distant cousins through our descent from John Round (ca. 1645-1716) of Swansea and Rehoboth, Massachusetts.

Descendants of John Round are treated in the 1983 work by H. L. Peter Rounds, The John Round Family of Swansea and Rehoboth, Massachusetts, which won the Donald Lines Jacobus award the following year. The South Dakota State Historical Society had published a partial ancestor table of the Senator several years ago, identifying him as an eleventh-generation descendant of the first John Round. There are some errors on the ancestor table, so refer to the chart and sources below, but the table serves as a good start.[1]

The Senator and I share the first three American generations, both descended from Jabez3 and Renew (Carpenter) Round, making us seventh cousins twice removed. Renew is the source of my Mayflower descent from John, Elinor, and Francis Billington, so Senator Rounds is also a descendant of Plymouth Colony’s first English man executed for murder! How the name Renew was continued in this family is also interesting, which I’ll continue in another post. While my closer Round kinship is through my mother, my father also descends from John Round, which I think makes me well-rounded!

As all of John Round’s male-line descendants in the seventeenth and eighteenth century have the surname Round, you might wonder why the Senator, the other two Mikes I know, and the genealogist Peter Rounds all have the surname Rounds today. For this I will refer the following paragraph in the introduction of the 1983 Round genealogy:

A special word should be devoted to the final “s” which is commonly added to the Round name. The compiler has found a number of instances where descendants have debated which form is “right”: with the “s” or without the “s.” The compiler feels this is often a debate not worth waging, since it has no simple solution. From the very earliest appearance in America of John1 Round in 1689, the name bore no final “s.” This was the case all the way through the 1700’s, with only an occasional instance when the “s” was added. Then, in the early 1800’s, it started showing up more and more often, sooner in some areas than in others. However, in most cases, there was virtually no pattern. It has become obvious to the compiler, having pored over hundreds of old, original documents, that the addition of an “s” came about largely by default. It was imposed upon them. Again and again it has been found that clerks, muster masters, census enumerators, attorneys and others were the ones who first wrote it with an “s.” The person himself, if he could wrote, signed without the “s.” But as they moved into the 1800’s, the “s” was imposed upon them more and more. So the Round family members themselves, one by one, started using it. Some lines of the family held out longer than others, but most eventually yielded. Finally, arriving in the contemporary age, it seemed that all branches of the family were unanimous in using the final “s.” However, the consultation of 1982 telephone directories from around the country proved there are still some geographical areas and some lines of the family where the absence of the final “s” is carefully followed. Though all ancient instances left the “s” off, most modern-day descendants use it. There is no “right” or “wrong” way.

The change in the Senator’s line appears in generation six. Sylvester, Jr. was born in Rehoboth in 1788 without the s. His marriage at Rehoboth in 1811 is likewise without the s, although the marriage intention at Dighton, Massachusetts has it. The s is inscribed on his gravestone in 1849, and the plural spelling is used by all later generations.

The imposition of the “s” is something that I have a great deal of sympathy for regarding my own surname. Many branches of the Child family likewise have had the “s” added over the years and I even get Christmas cards today from some of my relatives writing my surname as Childs! I have sort of gotten used to it (apart from when I miss an email!), although I remember frequently as a child my father always spelling our surname to others to ensure they would not get it wrong, often to no avail! All four years in high school, my report card always came addressed to me as “Christopher C. Child,” and my parents listed as “Mr. and Mrs. William C. Childs”! 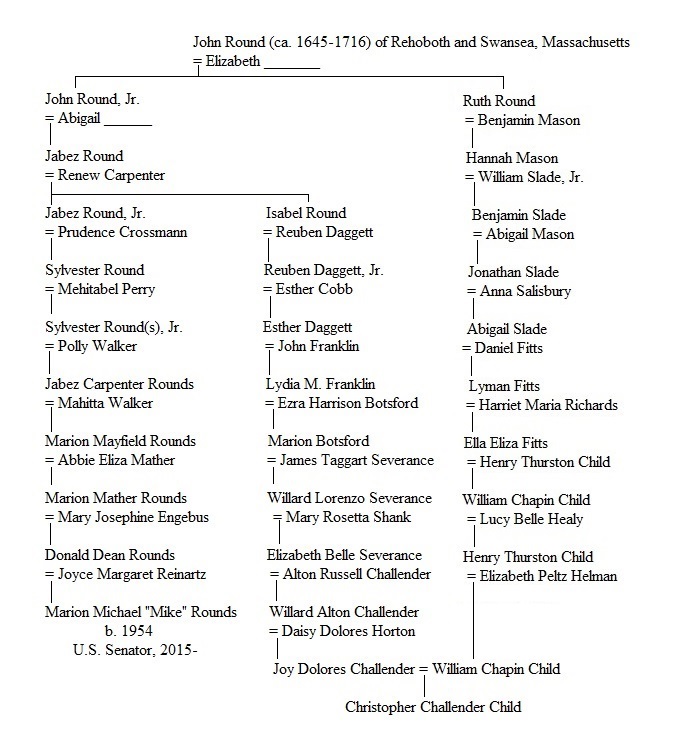 [1] For a discussion on the fictional John Round of Yarmouth, Mass., erroneously stated in earlier works as the father of John Round of Swansea and Rehoboth, see Robert S. Wakefield, “Round Family – Fact or Fiction,” The American Genealogist 54 [1978]: 37-38.

9 thoughts on “Round and round”