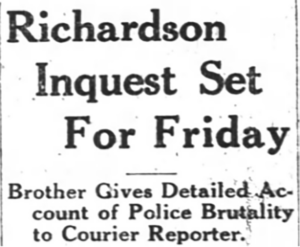 Continuing  with the ancestry of actor Billy Porter, the story of note I found in the actor’s maternal ancestry was more immediate and quite tragic. Porter’s mother Cloerinda Jean (Johnson) (Porter) Ford was the daughter of James and Martha (Richardson) Johnson, and granddaughter of Thomas H. and Mary (Hines) Richardson. Thomas H. Richardson (1889-1923), a native of Cumberland County, Virginia, moved to Pittsburgh by 1910. Thomas and Mary had three children, and Thomas worked as a packer in a steel mill and as a plasterer. Thomas died young, at thirty-three, on 26 May 1923. However, the cause of death on his death certificate prompted me look at his life further – “Shock Hemorrhage following Gun Shot Wound Through right Breast.”

I searched several Pittsburgh newspapers on newspapers.com. An account of the incident the day following Richardson’s death in The Pittsburgh Press Sun described a version of events: “According to police, Richardson with two Negro companions and a white man were quarreling in Butler st., near Thirty-eigth st. The police at Forty-third st. station were notified, and Patrolman Fullerton was sent to investigate. When the patrolman arrived at the scene of the quarrel, it is said that Richardson drew a revolver. The patrolman saw him reach for the gun, police say, and drew the quicker. Patrolman Fullerton fired first, and Richardson dropped to the ground with a bullet in his breast.”

However, this version of events was soon disputed by several witnesses. Thomas’s brother Charlie Richardson gave a detailed account of police brutality to the Pittsburgh Courier, which began with an argument between Charlie’s son Charles (Thomas’s nephew), and a drunken white men initially posing a police officer: “The officer saw the commotion, and ran after [Charles] Richardson who knocked the white man down, and the boy ran into an alley where [his uncle] Thomas Richardson kept his tools and implements. Thomas Richardson had nothing to do with the argument between the boy and the drunken white man, and did not see it. When the officer ran into the alley after the boy, Thomas Richardson asked the officer what the boy had done. The officer then turned on Richardson telling him he was trying to interfere with an officer. The cop struck Richardson and knocked him down.

“Thomas Richardson had nothing to do with the argument between the boy and the drunken white man, and did not see it.”

“Young Richardson, seeing the officer strike his uncle, got frightened and ran away. The cop and the older Richardson remained in the alley and fought until the cop, with help from another, got Richardson down in the alley, which was filled with brick. When the cop got Richardson down, he and his helper searched Richardson and found a gun. They took the gun and ordered Richardson to go to the box for the wagon. While Richardson walked from the alley to the main street to cross over to where the box is, the officer followed with the two guns right in Richardson’s back. When Richardson stopped at the curb to allow some vehicle to pass, he stepped back a step, and at this instant the cop fired right into Richardson’s back.”

Several new versions of events were offered by police, that “when [Richardson] failed to heed Fullerton’s command to halt, the latter fired one shot, the bullet taking effect in the Negro’s back.” William Fullerton was charged by a coroner with manslaughter, but was released on 29 May 1923 on $2,500 bail. A grand jury returned an indictment of murder on 6 September. Unrelated newspaper accounts show Fullerton was still actively serving as a police officer in November 1923.

Fullerton’s trial did not commence until fourteen months later, in December 1924. At trial Fullerton claimed his revolver had “discharged accidentally when the Negro, whom he had placed under arrest, swung around as the defendant was pressing a revolver against his back.” After deliberating for only fifteen minutes, a jury returned a verdict of acquittal. I found no explanation in the newspapers for the wide variety of explanations of Richardson’s death attributed to the police.

Certainly, the story of Thomas Richardson is by no means unique. It is reflective of how strong independent journalism can hold police misconduct accountable after initially giving a false narrative of events, even when justice does not ultimately prevail.