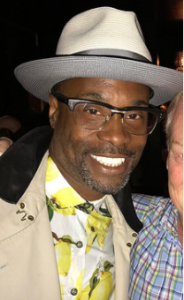 One of my favorite shows of the last few years has been the FX Original Pose, chronicling the lives of LGBTQ people of color in the ballroom culture of New York City during the AIDS crisis in the 1980s and ’90s. With its amazing cast of talented actors, one of my favorite characters was Pray Tell, portrayed by the actor Billy Porter, who is known for his earlier work in Kinky Boots and more recently as the fabulous godmother in a remake of Cinderella. With Pose ending its season earlier this year, and Porter releasing his memoir Unprotected this month, I decided to explore the actor’s ancestry and found two very different stories, certainly representative of the variety of the African American experience over the centuries.

While William Ellis “Billy” Porter, Jr. is a native of Pittsburgh, Pennsylvania, seven of his great-grandparents were born in the south (four in Virginia, two in Alabama, and one in North Carolina). The only great-grandparent born outside the south was his father’s maternal grandmother, Adeline E. (Fletcher) Henderson (1876-1916), born in Ohio, whose parents, James and Annie (Ellis) Fletcher, were born free in Virginia before the Civil War.

Adeline’s great-great-grandfather Sterling Gladman is described in Free Blacks of Lynchburg, Virginia, 1805-1865 as “the slave and ‘best friend’ of Revolutionary War General Butler Claiborne, who gave Sterling his freedom ‘one year after the Revolution as reward for bravery and loyalty during the War.’” Sterling’s son Claiborne Gladman (1788-1855), however, was born enslaved, inheriting the status of his mother, but was later emancipated by the Gillett family. Claiborne was a barber by trade in Lynchburg, and was also a slaveholder himself, recorded in the 1820 census in Lynchburg with one enslaved woman over 45, and a younger enslaved man and woman (both between 14 and 25).

While Claiborne and his wife Anna would live the remainder of their lives in Lynchburg, several restrictive and demeaning free black laws passed by the Virginia legislature throughout the antebellum period forced many to move north. This exodus included Claiborne and Anna’s daughter Adeline, her husband Patrick Henry Ellis, and their two children Anna and Gladman, who moved to Wayne, Ohio in the late 1850s and where they are enumerated in 1860 with five-month-old Ohio-born son Patrick.[1] Anna married James Fletcher, also from Virginia, and their daughter Adeline (named for her maternal grandmother), married North Carolina-born Henry A. Henderson. Their daughter Lola Alice Henderson married Larnzie Thrun Porter; this last couple are the parents of the actor’s father, William Ellis Porter, Sr. (1939-2006).[2]

The next part will discuss one of Porter’s maternal ancestors.

[1] The Isaacs and Fossett families of Charlottesville, Virginia, in the ancestry of William Monroe Trotter, had also moved to Ohio during the same period before the Civil War.

[2] Lineage developed from census and vital records in Virginia and Ohio, and obituaries from Ohio and Pennsylvania.

4 thoughts on “Ancestors of Billy Porter: Part One”