Despite being a year late thanks to COVID-19, the Olympics are finally here. With the opening ceremonies set to start on July 23rd, the wait is finally over for athletes and viewers alike. For most people, the Olympics have been a constant occurrence, reliably happening every two or four years, barring any rare unforeseen events. It is hard to believe there was once a time when the Olympics were practically nonexistent. Like many cultural traditions, the importance of the Olympics has ebbed and flowed throughout history. As a Classics major, my experience with the Olympics has always been based in their origins. I have come to realize that my knowledge of the Olympics pertains solely to their Greek roots and the current spectacle, which leaves hundreds of years unaccounted for. Therefore, with the games quickly approaching, I thought it would be interesting to take a look at the “genealogy” of the games. 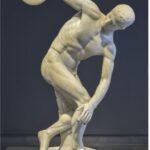 As most know, the Olympics began in ancient Greece more than 3,000 years ago as a way to honor the god Zeus. This topic has always featured heavily in history classes on the ancient world; therefore, the origins of the Olympic games are nothing new (quite literally). The original games had a focus on a select number of physical displays of strength and endurance, which evolved into countries across the world competing in 33 different sports with 339 events. Like many traditions, it is evident that the games have changed drastically.

The Olympics remained relevant in the ancient world until the year 393 AD, when Emperor Theodosius I banned the games for their connection to pagan traditions. In the following years, the temples associated with the games were razed and further buried due to natural disasters. For the next 1,500 years there were no Olympic games, although they remained relevant through artwork, theatre, and lore. The games only began to physically reemerge in the nineteenth century.[1]

There are a number of opinions as to how the Olympics were revived. The most well-known occurred in 1892 when Baron Pierre de Coubertin met with the Union des Sports Athlétiques in Paris in order to propose a revival of the famed Olympic games. Coubertin believed that a rebirth of the classic athletic competition would add both health and beauty to the world. Although he was scorned for clinging to the sentimental and nostalgic view of the games, two years later he had gained enough traction to found the International Olympic Committee, which to this day continues to oversee the Olympic Games. Four years later, in 1896, the first modern Olympics were held in Athens, Greece, thereby kickstarting the tradition of the Olympics as we know it. Nevertheless, the idea that one man’s fascination with the original Greek games would be enough to revive the world’s largest competition is both romantic and flawed.[2]

[The] idea that one man’s fascination with the original Greek games would be enough to revive the world’s largest competition is both romantic and flawed.

According to classicist David C. Young, multiple attempts to reestablish something like the Olympics occurred prior to Coubertin’s Sorbonne Congress in 1892. In the early 1830s, there were stirrings of a revival of the games in the Ionian Islands, stemming from the French creation of the Prix Olympiques. Although this festival was focused on a competition of artistic ventures rather than athletic competitions, it nevertheless sparked an interest in returning to the glory once found in the classic Greek games.

In 1843, the Greek philanthropist Evangelis Zappas requested financial aid for the founding of games in an Olympic style from King Otto. Although it took a number of years, the Olympia – consisting of a number of sporting events – was held in 1858. Such revival events continued to pop up throughout the late nineteenth century, including attempts in 1850 with the Much Wenlock Games in England and the Zappian Games held in Athens in 1859. Without the multitude of attempts preceding Coubertin’s proposal, it is unlikely that the games would have been restored so efficiently. Nevertheless, he was still the first person to bring the games to the international stage. The 1896 Olympics promoted by Coubertin featured thirteen nations competing in a total of 43 events, which elevated the games to a worldwide phenomenon.[3]

One hundred twenty five years after the 1896 games, the 2020 Tokyo Olympics are finally here. As Manolis Andronicos notes in his work on Olympic ruins, “The supreme significance of the Games demanded that all be present in peaceful assembly in the sacred grove.”[4] Andronicos’ description of the truce embedded in the games remains a vital part of their tradition. Despite the trials of war, political differences, and pandemics, the Olympics continue to serve the purpose they once did in ancient Greece. They have always served to provide a place of peace and community. With the world shaken by a global pandemic, in this year especially the Olympics will act as a symbol of unity in a time of uncertainty.