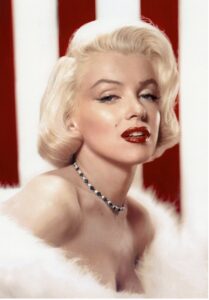 Throughout the 20th century it was somewhat common, when a divorced (or widowed) mother remarried, for the stepfather to adopt her child or children, often taking the new husband’s surname. (See a recent post on President Bill Clinton, as well as President Gerald Ford and First Lady Nancy Reagan; the latter two also had their first names changed.) There is also the situation where children are born (most often out of wedlock) with the surname of their mother’s previous husband, and thus were not adopted but bear a surname neither parent had at birth. The birth name of Marilyn Monroe as Norma Jean Mortensen is one of the more famous examples, as Mortensen was the surname of her mother’s estranged husband at the time of Marilyn’s birth (and listed as the father), although she later used her mother’s first married surname of Baker.

Exactly why this has been done is perhaps for convenience, as divorced and widowed women would often keep their prior husband’s surname unless they remarried, and women would give their children their present surname (which would usually result in the children having the same surname as their elder half-siblings). However, for future generations, the way such complexities were recorded can certainly be confusing.

An example of this in the late nineteenth century concerns a friend’s ancestor Annie (Barley) Kilday (1827-1923). For the 1870 census, she was enumerated in Colchester, Connecticut, with five younger individuals that would likely be her children. No husband is present. By the 1880 census, now in Norwich, Connecticut, Annie’s household has three of the same five children from 1870, along with three younger sons – Ansel, aged 8, and twins John and Cornelius, aged 7, all with the surname Kilday. Annie is listed as widowed. One might initially think Annie’s husband (Peter Kilday) was simply away for the 1870 census and that these younger children are also those of Peter who perhaps died sometime during that decade. However, going to Colchester Vital Records, there is a record of Peter’s death there on 13 October 1867 (the cause of death was “violence”). Who was the father of Annie’s younger sons?

Who was the father of Annie’s younger sons?

While the 1880 census lists the younger three sons as having both parents born in Ireland (like the older children), later censuses for Cornelius Henry Kilday (1872-1951) list his mother as born in Ireland, but with his father born in Denmark. Going back to the Colchester Vital Records, the births of these last three boys in 1870 and 1872 are not under the surname Kilday, but under the surname Ischobar (first names not given, only “male”), all listed as sons of Anson Ischobar, born in Denmark. Other than these three birth records (and Cornelius’s marriage and death records; I have not tracked down happened to his two full brothers), I can find no other record of this Danish man. While the three sons he had with a widowed Irish woman were born with his surname, they later assumed the surname of their mother’s late husband, and in the case of Cornelius, the surname Kilday was continued with his descendants.

The 2010 biographical sports drama The Fighter centers on the lives of Lowell, Massachusetts professional boxer Micky Ward (portrayed by Mark Wahlberg) and his older half-brother Dicky Eklund. (This is one of my top four favorite movies, not for the boxing but for the on-point New England family dynamics.) In an early scene of the movie it is mentioned that their mother Alice Shirley (Greenhalge) (Eklund) Ward has nine children, four by her first husband Richard Eklund [Sr.], and then five by her second husband George Ward. However only the youngest two children have the surname Ward (Micky and his younger sister), while Alice’s first three children with George were born before their marriage and have the surname Eklund. (I have seen their birth records and saw that Alice’s former husband Richard Eklund is listed as the father for these three children.)

Other examples appear in the ancestry of friends and colleagues. One colleague, after learning from his father that he had a brief first marriage as a teenager that ended in divorce, decided to see what happened to his father’s first wife and tracked down her obituary. She had never remarried and kept the surname from her brief marriage, and her death notice revealed she had four children with the surname of my colleague’s father! While the younger three children had no father listed on their birth certificates, the birth certificate of the eldest child listed the mother’s former husband as the father, even though by this point they had not seen each other in several years and he was already married to his second wife. While the situation was well-known to the people living (i.e., these four children were by a man she was not married to), this could certainly confuse a later genealogist thinking my colleague’s father had two (apparently bigamous) relationships.[1] When my colleague met one of his father’s first wife’s sons, it was an interesting meetup. The men had the same surname as a result of their parents’ brief marriage, but these two men were not stepbrothers and not related to each other. What do you call them? I coined a term: “non-brothers.”

[These] two men were not stepbrothers and not related to each other. What do you call them? I coined a term: “non-brothers.”

Another situation concerned a friend’s widowed grandmother. The woman, whom I will call Frances, had three children by her husband, who died in 1954. Frances then had a child with a boyfriend but listed her late husband as the father (and noted the father was deceased), although this child was born in 1957, three years after her husband’s death.

Many other cases I have come across either list the biological father on the birth certificate (even though the child has the present surname of the mother) or give no father at all. Often in the child’s later records (their marriage and death records), the correct father may be listed, as usually this child has little reason to list someone else as his or her father once they are an adult. This naming convention should be considered when researching past generations of children born to divorced or widowed mothers.

[1] Regarding a child born to previously married parents, the elder half-brother of President Bill Clinton, Henry Leon Ritzenthaler (1938-2009), was the child of the president’s father William Jefferson Blythe by his first wife Virginia Adele Gash, whom W.J. Blythe had married in 1935, but divorced in 1936. While the parents were not married at the time of his birth, he was born Henry Leon Blythe, and was then later adopted by his mother’s second husband.

8 thoughts on “By any other name”