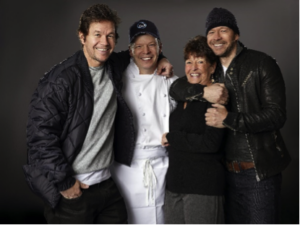 The death of Alma Wahlberg, aged 78, mother of actors Donnie and Mark Wahlberg (also both known for their earlier musical careers in New Kids on the Block and Marky Mark and the Funky Bunch, respectively), was announced last month. I had worked on the Wahlbergs’ ancestry several years ago as a surprise for Gary Boyd Roberts, who has been a longtime Mark Wahlberg fan. Years later, when Gary was at Wahlburgers in Boston, noticing numerous pictures of the Wahlberg family as well as those of Mark’s movie career, Gary told his waitress, “This place needs a little less Mark Walhberg and a little more Marky Mark!” To Gary’s amazement, the teenaged waitress said she did not know who “Marky Mark” was!

As the Walhlberg family has been in Boston for several generations, I began with Mark’s birth certificate and those of his parents, which are recent enough that they are only at the Massachusetts Registry of Vital Records (for the state copy, while Boston City Hall also has a city copy). As I worked out the ancestry, it went back to four demographic groups – Swedish (1/4, which is where the Wahlberg surname originates), Irish (5/8, just over one half), French-Canadian (1/16), and New England Yankee (1/16).

When I told Gary about my initial findings, he was very excited, and I saw him in in the library early the next morning … on a microfilm machine! (For those who know Gary, he usually keeps something of a night owl schedule; this is one of only a handful of times I have seen him using microfilm.)

…I saw him in in the library early the next morning … on a microfilm machine!

For several years, I had told Gary about a few royal descents for immigrants in colonial Quebec that could be included in his Royal Descents of 600 Immigrants, as they were ancestral to several well-known American figures (Jack Kerouac, Madonna, Angelina Jolie, to name a few). Gary was hesitant to expand the book’s focus (the immigrants he had included came to what is now the present-day United States leaving notable descendants). After working with Diane Wolford Sheppard of the French-Canadian Heritage Society of Michigan, we discovered, through the Wahlbergs’ French-Canadian ancestors, a line back to Anne (Couvent) Amiot of Quebec, who has a descent from King Henry III of England. This discovery persuaded Gary to include the French-Canadian immigrants of royal descent (via their descendants who came to the United States), and so his last publication – The Royal Descents of 900 Immigrants – includes the Wahlbergs as well other contemporary American and Canadian figures with colonial Quebec ancestry who have royal connections – including Beyoncé, Justin Trudeau, and Justin Bieber!

However, through Wahlberg’s one-sixteenth New England Yankee ancestry, he descends from Great Migration colonists William and Ann Hathorn. William Hathorn was born about 1606, probably in Bray, Berkshire, and was in Dorchester, Massachusetts by 1633 (now a section of Boston, where the Wahlberg family originated). William married Ann by 1634 and the couple moved to Salem, Massachusetts by 1637. William had several civil positions in Massachusetts Bay Colony, including deputy to the Massachusetts Bay General Court for both Dorchester and Salem. Further, these were the Wahlberg brothers’ matrilineal ancestors, as the descent was entirely through women.

So, in remembrance of the Wahlberg family matriarch, and as Mother’s Day posts frequently mention matrilineal lines, the below line summarizes fourteen generations of Massachusetts women over four centuries.[1]

[1] All dates from Massachusetts Vital Records to 1620-1850 and 1841-1920 (available on AmericanAncestors.org) or from personal examination of twentieth-century vital records. The births of the children of William and Ann Hathorn (born between 1634 and 1649) were written by William Hathorn himself on a blank leaf of a book printed in 1610, transcribed in Essex Institute Historical Collections 1 [1859]: 2. For further details of Mark Wahlberg’s ancestry and distant kinships, see FamousKin.com.

11 thoughts on “A Massachusetts matrilineal line”