Responding to messages from autosomal matches can have their frustrations. I manage over sixty accounts and frequently the messages I receive do not indicate which account they match. Frequently the amount of shared DNA is simply too small for me to be able to provide any meaningful assistance. (I’ll respond as best I can.) But when I am able to help, it makes the process all the more worthwhile.

This discovery concerns a match on AncestryDNA between my wife and a woman named Casilda. She matched my wife at 127 centimorgans across 7 segments. While I have had my mother-in-law tested on Ancestry (for the reasons I discussed in the previous post), I have yet to have my father-in-law tested there, but since Casilda and my mother-in-law shared less DNA, I could quickly infer Casilda had to be a higher match to my wife’s father.[1] Casilda also said her family was from San Francisco de Macoris, as is my father-in-law. Further, she also matched three children of my father-in-law’s elder half-sister. In evaluating Casilda’s tree, and these close matches, deducing the kinship seemed promising.

The surname Vargas … was the only common surname in their respective ancestries.

The surname Vargas (also written as de Vargas) was the only common surname in their respective ancestries. Casilda’s grandmother Maria Magdalena Vargas had died when Casilda’s father Ramon (who was born in 1927) was only eight years old, and no one in Casilda’s family knew the names of this grandmother’s parents. In evaluating what this number of centimorgans could mean, always referring to the information on DNA Autosomal Statistics, one likely kinship (of several) emerged, that Casilda was a second cousin once removed to Arlene and her cousins.

For this to be their kinship, Casilda’s grandmother Maria Magdalena Vargas would need to be a sister to Arlene’s great-grandmother Virginia de Vargas. Virginia was born about 1893, and her parents married in 1884. I had identified two older siblings born in 1886 and 1892, but there were likely more. Going back to the civil and church records of Virginia’s native San Francisco de Macoris, I identified a total of eight siblings born between 1886 and 1902 (summarized here). Virginia’s youngest sister, born on 18 September 1902, was Magdalena de Vargas![2] This was a perfect fit. I shared this information with Casilda, confirming the connection. She replied that I almost made her cry! 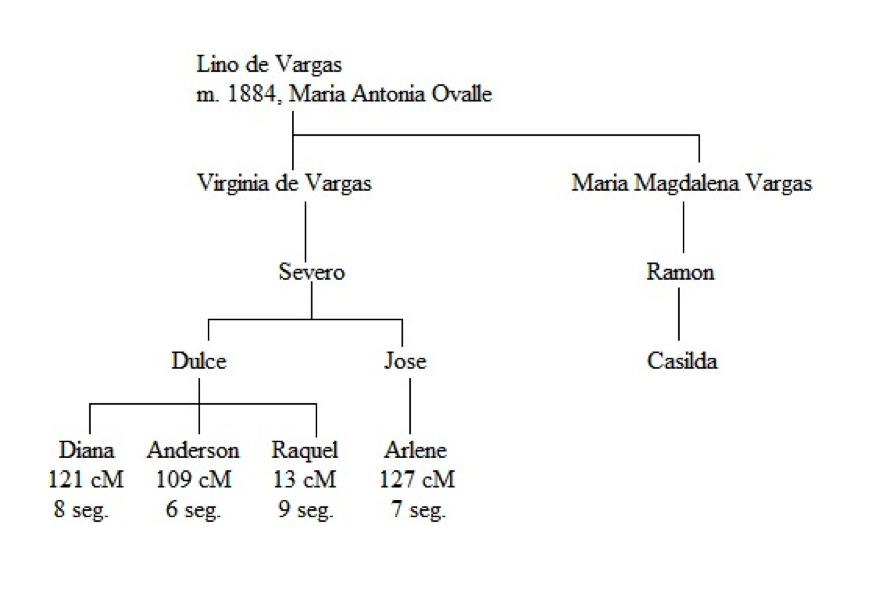 While Casilda could have found her grandmother’s parents from Magdalena’s own marriage record, having Arlene as an autosomal match allowed us to focus our efforts on what I had already researched on this family. I shared what I had on the common ancestry of Lino de Vargas and Maria Antonia Ovalle. Lino’s maternal grandfather, Jose Alvarado, appears at age 16 with his parents on the 1812 census of San Francisco de Macoris. Also on this census is Jose’s paternal grandfather, Juan Alvarado, aged 99, the earliest ancestor I have identified in my father-in-law’s ancestry (and now in Casilda’s!).

Assisting DNA matches with their ancestry when possible can be a very rewarding experience, as can be seen here. Hopefully one day one of your matches may assist you on an unknown part of your ancestry!

[1] Casilda and my mother-in-law shared 16 centimorgans. As my wife shared 127, the overwhelming majority of the DNA my wife shared with Casilda was through my father-in-law. This is another example of a match having shared DNA through both parents.

[2] In these Dominican records, full names are not always listed in every record – Maria Magdalena was sometimes listed only as Magdalena. Similarly, her mother Maria Antonia was sometimes only listed as Antonia.