Last November, I participated in an online panel discussion – Discussing DNA: Finding Unexpected Results – with authors Libby Copeland and Bill Griffeth, talking about some of the ramifications of genetic surprises that have come about from commercial DNA testing. I probably learn about these more than others, given my profession, and my own family is no exception.[1] However, your autosomal DNA matches also have the ability to find genealogical connections when someone’s recent family history has been lost, perhaps owing to family members dying young and later generations not learning of certain details to help find their ancestors in available records. These tests can sometimes be a time-saving genealogical shortcut in such cases.

Three years ago, I wrote about the exciting discovery I had in tracing my wife’s ancestors in the Dominican Republic and finding connections back to Puerto Rico, Haiti, and France. These ancestors were via my wife’s great-grandfather – Francisco Isidoro Paulino (ca. 1879-ca. 1959). What I did not explain in that post was how I first identified Francisco’s parents via contact with one of my mother-in-law’s close autosomal DNA matches.

Claudia told me the names of her four grandparents, and what she could remember on dates and places.

My mother-in-law Claudia’s parents died more than twenty years ago, before I met my wife. While I have asked Claudia and several of her siblings for certain family information, there is a fair amount that is no longer remembered. Claudia told me the names of her four grandparents, and what she could remember on dates and places. Years ago, I found the civil birth registration and baptism of her father, Juan Antonio Paulino, in 1908 in Santiago, Dominican Republic. He was baptized at Nuestra Señora de la Altagracia, and within those church records I found baptisms of two older siblings and a younger one; according to Claudia, though, her father was one of twelve children. I had hoped within these church and civil records to find the marriage of Juan’s parents – Francisco Isidoro Paulino and Mercedes Dolores Gutierrez – as such a record would likely give me the full names of all four of their parents. However, I was unsuccessful in finding such a civil or church record, at least in the church in which Juan was baptized.

Years later, Claudia took an autosomal DNA test with 23andme. I noticed a close match in Morgan, who was predicted to be Claudia’s second cousin. Morgan’s maternal grandmother was a Gutierrez from Santiago, and his mother remembered that her mother had a sister named Mercedes. If this Mercedes was Claudia’s grandmother, then Morgan and Claudia would indeed be second cousins. Morgan said his grandmother was the daughter of Eugenio Antonio Gutierrez and Cirila Fernandez. I found this last couple marrying in Santiago in 1885, but at a different church than I had searched previously. (This last church was indexed on familysearch to 1898, although some later records were browsable.) 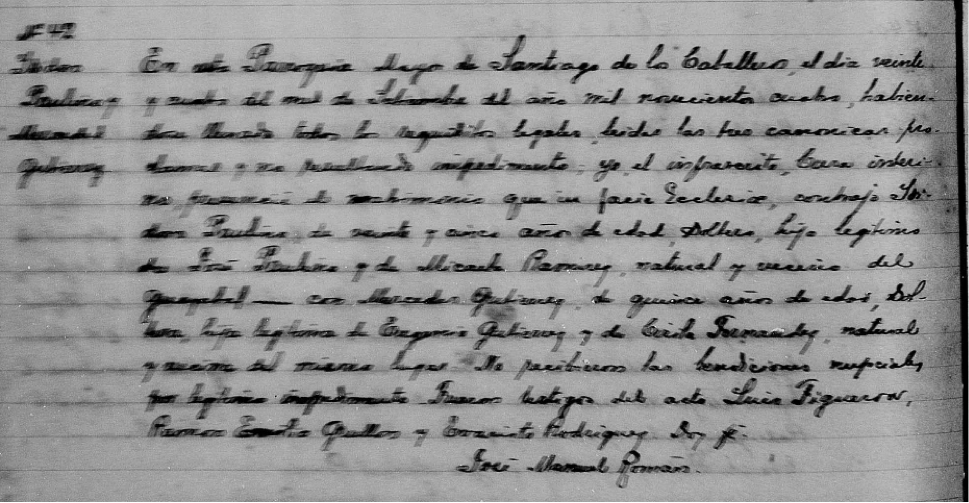 With this new church now identified, I found the marriage of Francisco and Mercedes in 1904, which indeed identified all four of their parents! Mercedes was a daughter of Eugenio and Cirila (and so Claudia and Morgan were indeed second cousins).[2] Francisco’s parents were Jose Valentin Paulino and Micaela Ramírez, whom I found marrying in Santiago in 1870. From just the three marriage records of Juan’s parents and both grandparents, I went from knowing only Juan’s parents to knowing all eight of his great-grandparents! Years later, I identified the origins Micaela’s father Jacinto Ramírez né Petain, providing my wife’s first, and so far only, documented descent back to Europe.

For these reasons I am always keen on looking at autosomal matches for clues, as the origins of Claudia’s mother’s parents (who were not married) remain elusive. As Ancestry has definitely taken the lead in their autosomal database, I have had several relatives who had previously tested with 23andme take tests with AncestryDNA (uploading the results onto MyHeritage and FamilyTreeDNA). My goal is to find a match with someone who knows more about these earlier ancestors, or has definitive known locations, allowing me to search records. I recently assisted an autosomal match related to my father-in-law, identifying the parents of their grandmother, as I now hope to identify my mother-in-law’s maternal grandparents. That story will be covered in part two.

[1] The most immediate surprises I have learned were the discovery that my mother’s oldest first cousin was not biologically related to us, discussed here, and my mother learning of a biological second cousin who was adopted (perhaps a future article).

[2] I discussed connecting with this cousin to determine the matrilineal migration of my wife’s grandfather going back to west Africa (since Morgan had the mtDNA of L1c1c’d) in my recent article on “Using Your Autosomal Matches to Find Candidates for Y-DNA and mtDNA Studies.”