There has been something of a silver lining with the virus in that the explorations that might have taken me farther afield have kept me close to home. We tend to overlook what is on our doorstep, opting instead for the adventure and “newness” of faraway places, but I was made again aware of the wealth of our own neighborhoods when, recently, I met a young man at the Alden House in Duxbury who had traveled from Council Bluffs, Iowa, to follow the paths of his Pilgrim ancestors. He had come all this way, taken a flight, rented a car, and booked numerous inns and hotels to do exactly what I have been doing all summer, a mere thirty minutes from my backyard.

My first stop on that golden October day in Plymouth was the Plimoth Grist Mill alongside Town Brook, a 1970 replica of the 1636 water-powered corn grinding mill operated by John Jenney (ca. 1589-ca. 1644), a brewer and miller who arrived in Plymouth aboard the Little James in 1623. His mill was Plymouth’s third, the first having been located near Billington’s Sea, a warmwater pond providing the headwaters to Town Brook. A second mill, lasting only two years, was built along Town Brook in 1632, followed by the 1636 mill which survived, remarkably, until fire claimed it in the mid-1840s.

Worked across the bed stone through furrows, the corn is scissored into smaller and smaller pieces before being deposited in the flour bin, from which it is sifted into corn meal, the finer grind, and sampe, the coarser grind known as grits.

Today at the mill, organic corn is ground, exactly as it was when corn was a staple of the colonists’ diet, on a pair of antique millstones – a stationary bed stone and a turning runner stone – the runner stone spun by a wheel powered by Town Brook’s rushing waters. Worked across the bed stone through furrows, the corn is scissored into smaller and smaller pieces before being deposited in the flour bin, from which it is sifted into corn meal, the finer grind, and sampe, the coarser grind known as grits.[1] When the colonists of Plymouth retrieved their ground corn from the miller, their sack would have been secured with a binding knot, a leak proof ligature known as a miller’s knot or sack knot. 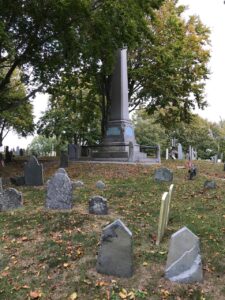 From the grist mill, I headed up to Burial Hill, the historic burying ground I had last visited in late spring.[2] It is impossible not to be stopped in one’s tracks by exquisite gravestone imagery, rendered at the time by general tradesmen but now recognized as irreplaceable folk art. Though I was repeatedly detained by one face after another, I eventually arrived at my destination, the Cushman Memorial, a conspicuous granite column erected in 1858 by the descendants of Robert Cushman (1577-1625). Upon its dedication in September 1858, the Boston Evening Transcript noted that the monument “affords the only adequate memorial yet reared in honor of any individual among the Pilgrims of 1620.” Cushman’s name may not be as familiar to Mayflower descendants as that of Brewster, Bradford, or Alden, but he was a seminal player in Pilgrim history, serving as chief agent for the Separatists, their “ancient friend” and “right hand,” coordinating the arrangements, provisioning, and financing for the voyage to the New World.

As noted in Robert Charles Anderson’s Great Migration sketch of Robert Cushman, he was in exile with the Separatists in Leiden and had planned to make the journey to the New World, though when the Speedwell was unable to make the voyage Cushman remained behind in England. He made a brief visit to the Plymouth colony in late 1621, arriving with his teenage son Thomas aboard the Fortune, but later returned permanently to England, where he died in 1625.[3] While in Plymouth, Cushman delivered a sermon, a copy of which was deposited in the cornerstone of Pilgrim Hall when it was laid in 1824.[4] 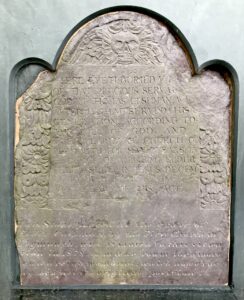 Young Thomas remained in Plymouth, left in the care of Gov. William Bradford, and grew up to marry Mayflower passenger Mary Allerton, the daughter of Isaac Allerton, and become the ruling elder of the colony. Upon his death in 1691, at the age of eighty-four, Thomas was lauded as a “precious servant of God” and was buried where the Cushman Memorial now stands. A gravestone, placed some years later by First Church parishioners, was moved a few yards away in 1858 to make room for the “more enduring memorial which now exactly occupies the original position.”

In 2016, the Cushman legacy was reborn when a long out-of-print treatise written by Robert Cushman was rescued by Mayflower scholar Michael Paulick and reprinted by the General Society of Mayflower Descendants. Written just months before the Mayflower sailed, The Cry of a Stone was not published until 1642, long after Cushman’s death, and under the name Robert Coachman, which contributed to its being overlooked as Pilgrim writing.[5]

From Burial Hill, my peregrination took me down Leyden Street to Brewster Gardens, a public park created during the Pilgrim Tercentenary from a swampy, overgrown pond and named for Elder William Brewster, whose garden plot had occupied the site. In a corner of the park, tucked at the back edge of a small pool fed by the Town Brook, an eight-foot tall bronze statue, Pilgrim Maiden, stands poised atop a boulder. A fitting complement to the nearby Pilgrim Mother, she is dedicated “To those intrepid English women whose courage, fortitude and devotion brought a new nation into being.” 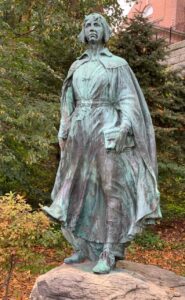 Pilgrim Maiden, given to Plymouth for the Tercentenary by the National Society of New England Women, is strong in design and with detail that brings life and character to the figure. She was sculpted by England-born Henry Hudson Kitson (1865-1947), whose other notable commissions include statues of the Lexington Minuteman (1900) and Roger Conant (1905), founder of Salem, Massachusetts.[6] In 1893 Kitson married his former student, Brookline-born Theodora Alice (Theo) Ruggles (1871-1932), who became an eminent and prolific sculptor in her own right, recognized for her war memorials. Most notably, she is represented at Vicksburg National Military Park with more than sixty sculptures. Her Civil War statue, The Volunteer, and her Spanish-American War statue, The Hiker, have been widely reproduced.

It had been anticipated that the Pilgrim Maiden, first conceived in 1913, would be ready in time for the Tercentenary, but its unveiling, with an accompanying ornate bronze tablet, also fashioned by Henry H. Kitson, did not take place until the afternoon of 4 September 1924, an event marked by a gathering of hundreds from all but one of the thirty-five colonies of the National Society of New England Women, called together after a luncheon by the chimes of the First Church.

Can one marvel at this ancient ritual, the return of the herring to Town Brook, spring after spring, without feeling a sense that this upstream journey is little changed since our Pilgrim ancestors wore their feet into this same place?

Brewster Gardens is bisected by Town Brook, whose importance to the Pilgrims cannot be overstated. From the 269-acre Billington’s Sea to its mouth at Plymouth Harbor, Town Brook flows 1.5 miles and was a source of fresh water, waterpower, and food for the colonists. Each spring, centuries before the Pilgrims had built their community along the stream, the herring – known as alewives – would begin their long, arduous journey from coastal waters to their spawning ground in Billington’s Sea, the freshwater pond where they had been born several years earlier. It was a passage fraught with obstacles, struggles, and setbacks, but those that survived returned to the sea, followed by a new generation whose own biological imperative would send them home to spawn a few years later.

Can one marvel at this ancient ritual, the return of the herring to Town Brook, spring after spring, without feeling a sense that this upstream journey is little changed since our Pilgrim ancestors wore their feet into this same place? Alongside Town Brook, what was originally a Native American trail, when the area was known as Patuxet, is now a public greenway that follows the brook inland from Brewster Gardens to Morton Park and Billington’s Sea. On that late October afternoon, as the waters of the brook rushed past, bird song filled the air and forget-me-nots bloomed a profuse blue along the banks. I walked the trail, past the grist mill, to my car, and headed home with two sacks of corn meal, new knot skills, and a bouquet of forget-me-nots.

I don’t remember my school days being nearly as rewarding or anywhere near as fun.

[4] The sermon, The Sin and Danger of Self-Love Described, is available at archive.org.

[5] The Cry of a Stone, transcribed and annotated, is available from the General Society of Mayflower Descendants, www.themayflowersociety.org.

[6] The National Society of New England Women (www.newenglandwomen.org), bringing together women of New England ancestry, was founded in 1895. Its commitment to Pilgrim history continues with its efforts on behalf of the National Pilgrim Memorial Meetinghouse restoration project.