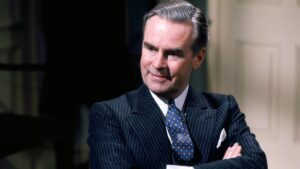 There are some great lines in one of Dorothy L. Sayers’s Lord Peter Wimsey stories about the way his “persistent and undignified inquisitiveness,” his “habit of asking silly questions,” leads him to pursue anomalies to a conclusion. In this story, “The Entertaining Episode of the Article in Question,” he is hunting for a jewel thief in the drawing rooms of Mayfair, and he ends the story both in triumph and in trouble:

The Dowager Duchess of Medway, whose jewels he has recovered, points out to Wimsey that “for the last three weeks you have allowed me to be dressed and undressed and put to bed by a young man” – posing as her lady’s maid. Wimsey blushes and apologizes, and the “grim old mouth relaxed a little.

“‘After all,’ said the dowager duchess, with the delightful consciousness that she was going to shock her daughter-in-law, ‘there are very few women of my age who could make the same boast. It seems that we die as we have lived, my dear.’

“For indeed the Dowager Duchess of Medway had been notable in her day.”

I am reminded of this as I consider the genealogist’s impulse to worry loose threads – or, for that matter, by the human instinct that leads us to say (with Alicia Crane Williams) ‘it must be so, as it was published in a book.’ Put another way, publication and the passage of time add a patina to any story that makes it feel complete.

Genealogists waver between these two impulses. After all, there are only 24 hours in a day; after all, one more Google search might provide the missing link!

And so I find myself contemplating the Livingstons of Dunipace.

And so I find myself contemplating the Livingstons of Dunipace. I came to them in a roundabout way, while putting together a chapter on the Hepburns of Bothwell: Elizabeth Hepburn, niece of the 1st Earl of Bothwell, married Alexander Livingston of Dunipace as her second husband. They had four children (and Alexander had four illegitimate sons, among them a forebear of the Livingstons of New York); in addition to the heir, John, who married Margaret Elphinstone,[1] there were two daughters, Janet (who married John Leighton and then Robert Bruce) and Margaret (who married John Strachan).[2]

The Livingston genealogist has occasional lacunae on some parts of the family and, in any case, does not set out to cover the families of Livingston daughters to any great degree. For a hundred years, then, Janet Livingston’s marriage to “John Leighton of Ullshaven” has resided between the covers of The Livingstons of Callendar without other editorial gloss.

“Leighton of Ullshaven” took some work to understand, since what is Ullshaven? I came across various versions – Ullshavin, Vllshawin, Ulshaben – before kind Google offered me modern Usan. (The same thing happened with a neighboring settlement, Arbroath, which seems a stretch to identify as Arbrothock.)

Seventeenth-century Leightons seemed prosperously situated, but what of John Leighton (or Lichtoun)? After some fruitless typing I found the quite revealing Memorials of the Leightons of Ulishaven, with a chapter subtitled, in warning, “The Black Sheep.”[3]

The family life of John Leighton, sometime Laird of (let’s call it) Usan, seems an unhappy one. Some years before the events in the story, he had married one of the daughters of Alexander Livingston and Elizabeth Hepburn. Following the death of his father, Thomas Leighton, his mother (Helen Stirling of Easter Brakie) had remarried – perhaps, in John’s view, with indecent haste.[4]

In April 1548, he seized his mother “violently” from Ardinhall (modern Arnhall?), presumably the home of her second husband James Straton. John Leighton was already in trouble for this bold action, but a year later he struck again, involving the Livingstons in the process.

“On the 20th of May 1549 it is recorded that his father-in-law Alexander Livingstone of Dunipace, Director in Chancery had a letter of gift of his escheat, he being at the horn and fugitive for the violent taking of the deceased Helen Stirling his Mother out of the place of Ardinhall … belonging to the Laird of Lowrestoun in April 1548 and taking her to Ullishavin against her will, binding her as a thief and for the alleged cruel slaughter of his said mother on Whitsunday in Pasche week namely on the 24th April 1549 in the place of Dulladis at 12 o’clock at night.”

Three men, likely Leighton’s servants, were convicted on 28 May for “‘the cruel slaughter and murder of Helen Struieling Lady Ullishavin spouse of James Stratoune, and Jonet Sawlie her servant within the place of Dullady,[5] committed under silence of night of forethought felony on April 24th last, the said Helen and Jonet being pregnant at the time…,’” for which they “were duly hanged.”

On 29 May 1549, “John Lichtone of Ullishaven was ‘denounced rebel and put to the horn as a fugitive from law’ in connection with the above murder, but no further record of him appears to exist.”[6] The author of the Leighton volume notes that “no other member of the family has earned notoriety by being a party to such a savage and brutal crime as that which disgraces the history of John Lichtoun”; he goes on to suggest that perhaps Leighton was in turn slain by his mother’s relatives.[7]

Not a thread I had planned to tug on, but here we are!

[1] It was their granddaughter, Jean Livingston, who was executed for the murder of her husband, John Kincaid of Warristoun.

[2] Edwin Brockholst Livingston, The Livingstons of Callendar and Their Principal Cadets: The History of an Old Stirlingshire Family (Edinburgh: Printed at the University Press by T. and A. Constable for the author, 1920), 345-47; Sir James Balfour Paul, The Scots Peerage, 9 vols. (Edinburgh: David Douglas, 1904-14), 3: 534.