On Thursday, 18 March 1920, NEHGS celebrated its 75th anniversary of incorporation—to the day—and recognized the 300th anniversary of the landing of the Pilgrims. From 2 to 6 p.m. that day, the Society welcomed the public to an open house at “its spick and span headquarters,” then located at 9 Ashburton Place in Boston, near the Massachusetts State House. Guides greeted the visitors and introduced them to the Society and its collections. Tea was served.

Members and specially invited guests also attended an evening program at Boston’s Ford Hall, which opened with an orchestra playing an overture from the opera Miles Standish. The Society’s 88-year-old president, James Phinney Baxter of Portland, Maine, presided and gave an address. The main speaker, Dr. Lemuel Herbert Murlin, president of Boston University, spoke on “The Pilgrim Republic and the New Republics in Europe.” The program ended with the audience singing “America.”

Prior to this event, many building improvements had been undertaken with the anniversary in mind. The entire NEHGS building was painted and the portraits, engravings, and “framed cabinet articles” were thoroughly renovated. Bronze markers were installed in various memorial rooms, a portable building directory was placed in the main entrance corridor, and a substantial chest of drawers was constructed to provide locker space for frequent library visitors. 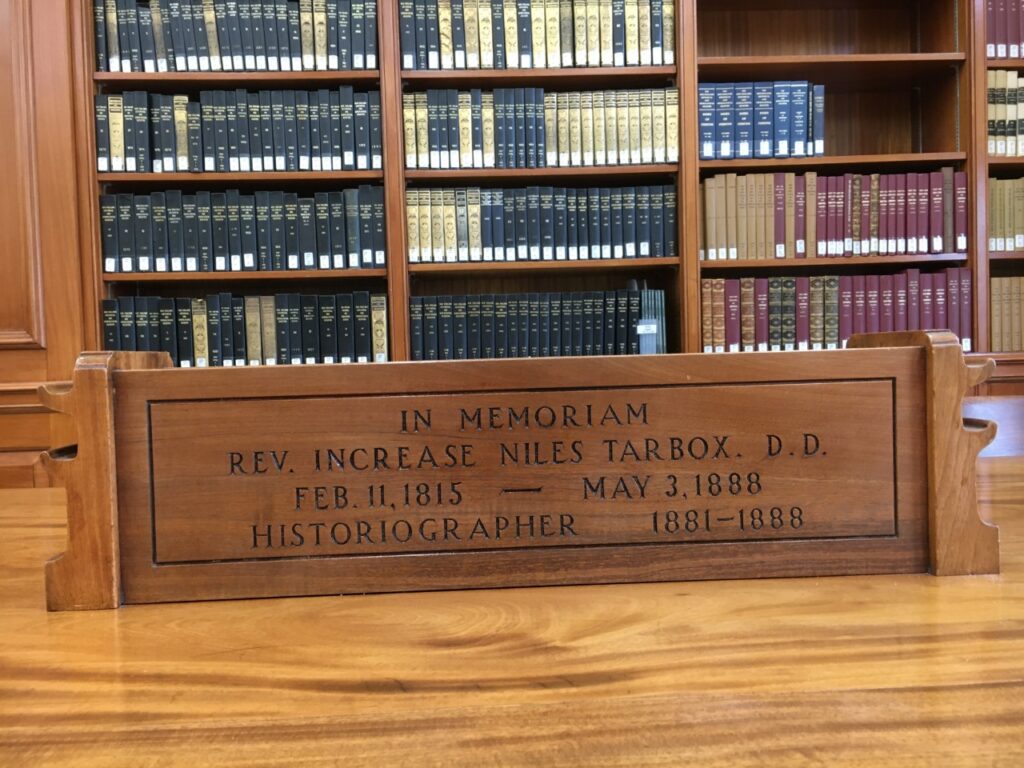 The first of the massive wooden memorial tables now in our seventh-floor reading room on Newbury Street were acquired in 1920. As the table’s inscription states, it was donated by Mrs. Samuel Carr (Susan Waters Tarbox) of Boston, in memory of her father, Reverend Increase Niles Tarbox (1815–1888), a children’s book author, an NEHGS historiographer who wrote “Memorial Biographies” for the Register, and an officer of the Society from 1881 to 1888. (Mrs. Carr donated the impressive sum of $2,000; a portion of that gift was used for the table purchase.) Made of mahogany, the table was designed by Brainerd, Leeds, and Kellogg, architects of the 1912 Ashburton Place building. The 1921 “Report of the Librarian,” by William Prescott Greenlaw, expressed the hope that “similar gifts will replace in the near future all of the old tables, desks, [etc.] … in the two reading rooms. The complete equipment of these rooms with mahogany furniture … will add much to the general appearance of the Library.” Others must have agreed; one hundred years later our reading room is enhanced by eight of these memorial tables.

At the beginning of 1920, the Society had 1,662 members, who—with the exception of life and special members—paid dues of $3, $5, or $10 annually. Based on its active endeavors on a number of fronts, NEHGS officers had realized the Society needed additional funds and created committees (the Committee on Increase of Membership and the Special Committee on Endowment and Members) to explore and implement some new initiatives.

NEHGS was extremely active in gathering and publishing genealogical material, although World War I had slowed down production. Greenlaw noted in his 1921 report that “the continued excessive cost of printing and paper is practically prohibiting the publication of many [completed] genealogical books.” A 1920 newspaper account noted that for sixteen years the Society had published Massachusetts vital records—until, owing to the war, the Legislature repealed the act that had authorized those publications.

“[The] continued excessive cost of printing and paper is practically prohibiting the publication of many [completed] genealogical books.”

Interestingly, the recent conflict did not negatively affect library visitation. The February 1919 “Report of the Council” looked back at 1918: “The average number of visitors has been remarkably well maintained, the conditions being considered; and the outlook, based upon former experience after the Spanish War, would indicate that a decided increase in the use of the Society’s Library will soon take place.” Indeed, Greenlaw’s “Report of the Librarian” published the following year commented on “a decided increase in the use of the Library.” Greenlaw wrote that “In 1920 it is expected that the Pilgrim Tercentenary will arouse considerable interest in family history and cause a greater demand for information.”

A 26 October 1920 article, “An Ancestor Industry,” written by Frederic J. Haskin and datelined Boston, acknowledged NEHGS as the best genealogical library in the country and offered evidence of increasing interest in genealogy. “After every war there is a gain in the popular interest in ancestors and family trees… Boys who fought in France met other boys with the same surname or some other odd given name that ran in the families… The Americans seemed less ready with the family past than the French or English. But the detective instinct, which every true American has, or thinks he has, was soon aroused and put on the trail of the missing ancestors. Some soldiers wrote home at once to trace connections, and others declared that when they got back they were certainly going to find out what ancestors hung on their family trees. As a result of this enthusiasm, and of the Mayflower celebrations, it is expected that this year will prove to be a record-breaking year for [genealogy].”

Overall, the New England Historic Genealogical Society was a bustling organization, known for excellence in many areas. In his 1921 report, librarian William Greenlaw concluded that “The remarkable growth of the Library and the constant increase in its usefulness in the past seventy-five years indicate that it will steadily develop in size and usefulness through years to come.” One hundred years later, I can confirm that Greenlaw’s prediction was fulfilled and also echo his hopes for the Society’s future. Perhaps in 2120 another NEHGS staff member will summarize our accomplishments and forecast continued bright prospects for our venerable institution!