One of my favorite things to do is travel. When that isn’t possible, I try to travel vicariously through the experiences of someone else. While working on the Reinier Beeuwkes III Family Collection this past year, I have had the chance to imagine myself voyaging all around the world. Here are some of my favorite adventures:

According to family legend, Captain Daniel LeBaron Goodwin (1767-1830) began his career as a sailor when he ran away from home at age 12. He spent the next thirty years sailing merchant vessels between New England, England, South America, and the West Indies. 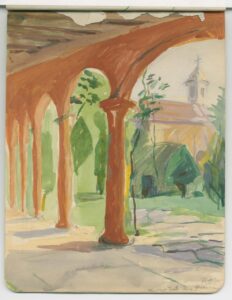 The collection has copies of ship manifests and customs papers from several of his voyages on the brig Ranger and the sloop Cato. The most eventful papers are those related to his 1804 voyage to Antigua. At some point during the routine trip from New England to Antigua, the Ranger was caught in a terrible storm and severely damaged. Upon making it to harbor in Antigua, the ship and its remaining cargo were seized by local authorities. As captain, it was Daniel’s responsibility to either reclaim the ship by proving that it was still seaworthy or recoup some of the cost for the ship’s owner. According to documents from legal authorities, dock and customs officials, and others, it was ultimately decided that the Ranger was no longer seaworthy. The cargo was sold, and the ship was taken apart. 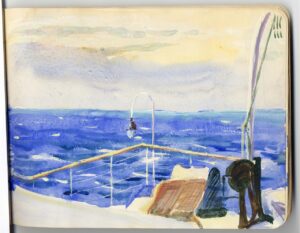 In contrast to her ancestor’s disastrous voyage, the “grand tour” Katherine Farwell Clark describes in her travel journal was smooth sailing. In June of 1906, Katherine set out from Boston on a Leyland Lines steamer. Katherine, several of her classmates, and their instructor were headed to Europe, where they would tour England, the Netherlands, and France before returning to Boston in September. As a young woman on her first big adventure, Katherine was full of curiosity and excitement, and her journal entries made me feel like I was experiencing the adventure along with her. She writes about the voyage across the Atlantic, including descriptions of her fellow passengers and a Fourth of July celebration on board. Once she arrives in Europe, her entries contain obvious enthusiasm and appreciation for the culture, history, art, and people she was seeing. Katherine enjoyed sightseeing – Versailles in particular “was a gorgeous sight!” – and recorded all the places they went and things they saw, but it seems like her favorite part of the trip was watching and interacting with the local people. Her entries about going to markets and cafes, trying new foods, traveling through the countryside, and meeting locals are as engaging as her descriptions of seeing some of the top attractions in Europe. 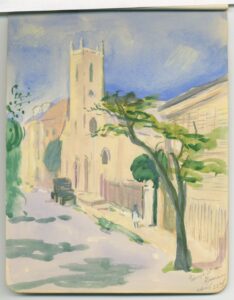 Where some people record their travels in journals, others prefer to use more visual methods. In April of 1933, Hannah LeBaron (Drury) Clark (1875-1949) went to Havana, Cuba. Hannah was an artist, and she used sketches and watercolors to capture her experiences on the cruise and in Havana. Through her art we can see sights like the Havana harbor, churches, city streets, and life aboard a ship. I have never been to Havana, but when I look at Hannah’s watercolors, I can almost hear the sounds of the city, feel the heat, and smell the salty sea air.

What kind of journeys did your ancestors have? Do you keep a record of your own travels?