Every family historian knows that research can feel like investigating a series of cold-case mysteries: How did they know each other? Where did they move after leaving their home town? Are these people related, or do they just share a last name? What exactly is a chandler or an alderman? My own family history is filled with unsolved mysteries, like why did my great-great-grandmother change her name so many times? When faced with a seemingly endless series of questions, it is important to celebrate when you actually find an answer. Recently, while processing the Reinier Beeuwkes III Family Collection, I was able to solve a mystery: what was the Manzana Colony?

The papers of Hannah Wheeler (Goodwin) Drury (1837-1916) contain 26 pages of legal and financial documents related to a place called Manzana Colony. These papers, dated 1893-95, are the only references to Manzana Colony in the entire collection. Based on the Spanish name and the fact that I had never heard of it, it seemed safe to assume that Manzana Colony was not in New England. In some families, having real estate or businesses outside of New England would be no big deal, but in the Goodwin and Drury families it was unusual – this was the first record I had seen of a Goodwin or Drury family member leaving New England since Captain Daniel LeBaron Goodwin’s disastrous voyage to Antigua in 1804. I was instantly curious about what sort of venture prompted Hannah to expand her family’s interests.

In some families, having real estate or businesses outside of New England would be no big deal, but in the Goodwin and Drury families it was unusual…

Whenever you are researching a question about family history, step one is to make a list of what you know. I began by going over the Manzana Colony documents, writing down any names, dates, places, or other details that might help me unravel the mystery. I also double-checked Hannah’s other papers and the papers of her husband and children to see if I could find any references I had missed. Based on this perusal, I learned that Hannah had invested in Manzana Colony but had never been there in person. I did not find any clues about what the Colony actually was. 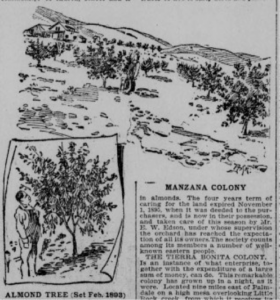 After examining the primary sources, I turned to the next best thing: our catalog. Unfortunately, I had no luck, so I went to the third best thing: Google. My first round of searching turned up a few footnotes and an index entry revealing that Manzana Colony was established in the 1890s as part of the Antelope Valley district of southern California. I finally had a location! Using that information, I tried digging deeper to find out what the Antelope Valley was and why someone from New England might be investing in it. Using the date and location information from my earlier research to limit my search, I hit the jackpot! On 22 April 1896, the Los Angeles Herald published a story on Antelope Valley, including an in-depth report on the history, economy, ecology, and culture of the Manzana Colony.

According to the report, Manzana Colony was “organized by the first owners of the land to establish an industrial, co-operative community of intelligent people for the purpose of fruit raising, with almonds as a basis … the aim is to build up as fine a settlement as it is possible for intelligent industry, skill and patience, with a moderate capital to do.” In addition to being profitable for its investors, Manzana Colony is described as having a beautiful climate, a refined and sophisticated community, excellent schools, and innovative agricultural practices. I can see why Hannah would have wanted to invest!

Unfortunately for the Colony, a nine-year drought began in Antelope Valley in 1895, ending its experiment in communal almond farming. However, thanks to Hannah’s papers and the preservation of an old issue of the Los Angeles Herald, the short history of Manzana Colony lives on for anyone willing to do a little digging. What are some family history mysteries you have solved? What questions are still unanswered?

18 thoughts on “The Manzana Colony”