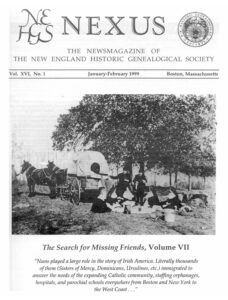 As we focus on the urgency of daily deadlines and details, it’s easy to forget the many moments that have brought us to where we are today. The 175th anniversary of NEHGS has afforded me an opportunity to step back and gain perspective – not only on the expansive history of our organization, but also on my own history as part of it. As I took a break from my normal tasks to reflect on my time at American Ancestors and NEHGS, primarily as creative director for American Ancestors magazine, I was surprised to realize that I am currently working on my eighty-third issue of the magazine!

I was hired in 1999 by my current supervisor, Lynn Betlock, although we were both in much different roles. Lynn ran the book sales department and, with my colleague Rick Park, I took orders over the phone. We were based in the NEHGS satellite location on North Washington Street in Boston, along with the very popular circulating library. In the days before online databases, our two departments provided access to resources greatly valued by our members who lived far from Boston.

At the time of my hiring in the sales department, NEHGS published a popular bimonthly newsletter titled NEXUS. In publication since 1983, NEXUS featured a variety of articles on genealogical research, including Gary Boyd Roberts’s long-running “Notable Kin” column.

As the year 2000 approached, a decision was made to expand NEXUS into a full 48-page magazine to be published five times each year. In January 2000 I joined the rest of the staff and membership in admiring the impressive new publication that debuted with full-length feature articles and regular new columns on a variety of subjects. 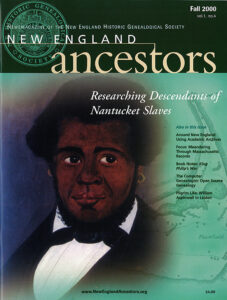 As the new magazine grew over that first year, staffing needs changed and I joined the magazine team as editor and creative director under Brenton Simons, then editorial director of Newbury Street Press and New England Ancestors. I was excited for the opportunity to combine my interests in design and history and began my new role just as the fall 2000 issue – which featured a lead article on researching the descendants of Nantucket slaves – was published. The first full issue on which I worked from start to finish was the holiday 2000 issue, with an eye-catching cover feature titled “Murder in Colonial Boston.” In fact, I remember now that I worked on much of that issue twice after accidentally deleting the file; it was an important early lesson in saving multiple copies of my work! 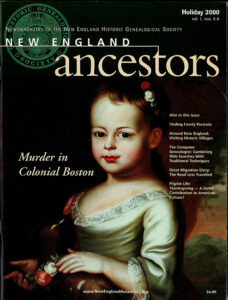 Within a couple of years, staff roles shifted and I was lucky to be able to work with Lynn Betlock again as she assumed the position of executive editor of the magazine in fall 2003. With the addition of Jean Powers in the same year, we established the three-person team that still produces the magazine today.

In 2009, we restructured the magazine, producing four 64-page issues, rather than five 48-page issues. In winter 2010, as NEHGS evolved, the magazine’s title was changed to American Ancestors: New England, New York, and Beyond, to better reflect the wider research interests of our readers. 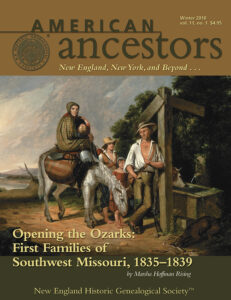 As the person responsible for the design of the magazine, the most exciting development for me over the last two decades was the change to our new color layout in summer 2013. Articles came to life once we were able to illustrate the text with bright, colorful modern photos, as well as beautifully vibrant reproductions of historic artifacts. 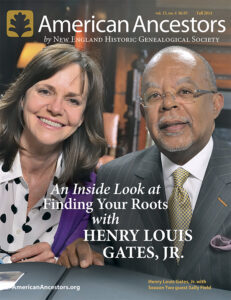 In spring 2018 and winter 2020, we published two special Mayflower editions of American Ancestors. Commemorating the 400th anniversary of the voyage, these issues are devoted to the history, relevance, and impact of the Mayflower and its passengers. Perspectives from the United States, the United Kingdom, the Netherlands, and the Wampanoag Nation are included. 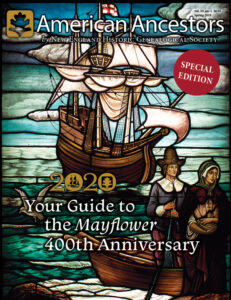 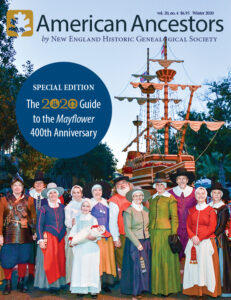 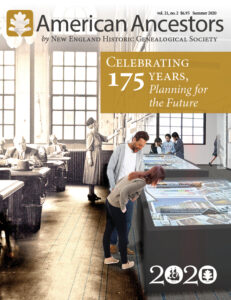 As I write at the end of June 2020, we are working on a special 175th anniversary issue of American Ancestors to be published in late summer, which will feature retrospectives on the long history of American Ancestors and NEHGS. The last twenty years in particular have been a time of dramatic growth and change for our organization, and for the field of genealogy as a whole. I’m proud to have had the chance to be a part of it and I look forward to many more years of sharing American Ancestors with our members and friends.