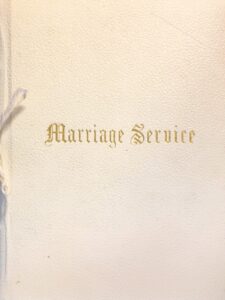 It would appear that I am not finished with my self-imposed task of sorting through my grandfather’s box of family papers. As I was preparing to put the box away, I found that I had by no means exhausted its treasures, from old passports and (miniature) Bibles to a copy of my paternal grandparents’ wedding certificate and the marriage service itself.[1]

Such wedding ephemera is easy to misplace, lovely and important though it is. Several insights emerge from looking at my grandparents’ service and the accompanying certificate. One is that, while my grandfather[2] is addressed throughout the service as Gilbert, my grandmother is Anne Beekman – I think the last person who thought of her in that way was her sister, my great-aunt Theo,[3] who died in 1996. Once married, it seems my grandmother dropped the slightly cumbersome double name. 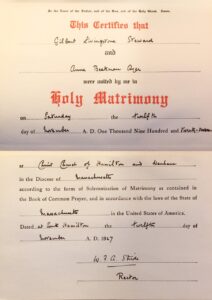 At a guess, the double name came about to distinguish my grandmother from her first cousin, also Anne Ayer, who was known (from her middle name) as Anne Proctor.[4] The two families lived just a few miles apart on Boston’s North Shore, and while my grandmother was almost a decade older than Anne Proctor, there was still a period of several years where the two could easily be mistaken (in speech) for one another.

A second feature of this wedding review is that the witnesses to the marriage were not quite whom one would expect to find. It is suggestive when one does not pick the groom’s brother or the bride’s sister for a role at the altar or in the vestry. In this case, I know my grandfather’s brother John was present, and an usher, but it was my grandfather’s college classmate (and best friend, it would appear), Ned Bigelow,[5] who was a witness on the marriage certificate.

By the same token, my grandmother’s sister Theo was maid of honor – as my grandmother would be matron of honor at Theo and Bob Winthrop’s wedding the following spring. And who was the bride’s witness? Her dear friend Eloise Lawrence,[6] who was soon to marry Harrison Gardner.

On a day in November 1927, my grandparents’ closest friends were present to sign the register. In all the surviving celebration of that event, this contemporary paperwork documents something important about their relationships.

Finally, the affinity between Anne Steward and Eloise Gardner continued in some curious ways. When my father was a child, his parents bought the Lawrence farm, Eloise’s former home; later, soon after I was born, my parents built a house on this land where my siblings and I grew up.

Still later, Mrs. Gardner’s grandson was my friend in high school and college – more recently, I’ve become friends with yet another generation of the Gardner family. This fact, not exactly traceable to my great-grandparents’ presumed friendship with Eloise Gardner’s parents, still suggests a multi-generational affinity between the Lawrences and Gardners on the one hand, and the Ayers and Stewards on the other!