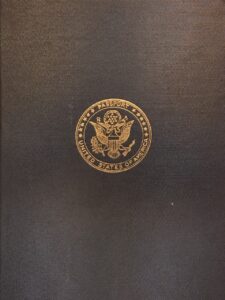 Ancestry.com has Campbell’s passport application from 1924, with an affidavit from a neighbor testifying to his American citizenship, and a more elaborate one – a separate sheet attached to the application – from an old family friend, Henry G. Wisner,[2] concerning Campbell’s birth in New York City in 1852: “the aforesaid statements are made by me soley [sic] for the purpose of establishing the date and place of birth of the said Campbell Steward due to his inability to obtain a birth certificate in conformity with the rules and regulations governing the issuance of passports by the Department of State of the United States Government.”[3] This in spite of the fact that Campbell and Margaret Steward had traveled extensively abroad in the years before a passport became a requirement.[4] 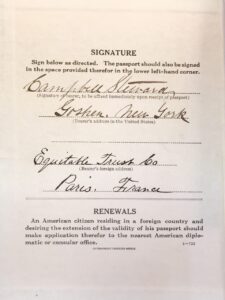 The Stewards planned to sail on the France in December 1924, in keeping with a family preference for French liners, and their trip was for “travel and pleasure” in Italy, France, and England. (Their mail address would be the Equitable Trust Co. in Paris.) The passport contains a visa for France issued in New York on 9 December, and another indistinct stamp (perhaps for their Italian sojourn) dated later in December. They were in France on 23 December. A final French stamp, on 15 April 1925, marks the end of their trip, as they boarded the Paris at Le Havre.

Another Ancestry database picks up the story.[5] Somewhere along the line they had met up with their eldest son, also Campbell,[6] and while the parents were destined for their home in Goshen, New York, Uncle Campbell was en route to Kebo in Bar Harbor, where the family had a summer cottage. The Steward family arrived at New York on 21 April.

Useful as the Ancestry passport applications database can be, there is something very pleasing about handling one of the resulting passports – which, as I look at it, is missing the photo of my great-grandparents from the application. My grandfather had it, prised out and glued into an album, as it was probably one of the better photos he had of his parents!

[4] In reviewing some of their other travel, I see my great-grandparents sailed on the Baltic in 1905 with Edward J. Smith, later captain of the Titanic.