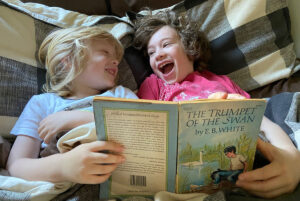 There are few things that make me happier than snuggling up with my sons Oliver and Charlie at bedtime and reading. We recently read The Trumpet of the Swan. It was the exact copy that my parents read to me many years ago, cracked spine and all. It was an awesome experience to read it again as an adult, observing Oliver and Charlie as they took in the humor, drama, and thrills of the story. Only now could I appreciate the author’s turns of phrases; only now could I grasp certain references and concepts.

Written by E. B. White—author of the beloved Charlotte’s Web and Stuart Little —The Trumpet of the Swan tells the story of a swan named Louis born in the wilderness of western Canada. Louis has no voice. His father steals a trumpet from a music store so that his son may indeed have a voice. And so, the plot turns to chronicle Louis’s quest to earn money to repay the music store and restore his father’s honor. 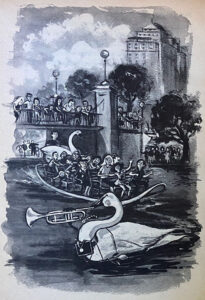 In chapter 13, Louis ends a bugling gig at a summer camp. Louis’s human friend Sam suggests a way to continue to earn funds: “Go to Boston. Maybe you can get a job with the Swan Boat.” At the mention of Boston and the Swan Boats, my sons’ eyes widened in excitement. Louis in Boston! The Swan Boats! How perfect! (Is it hometown pride? We go crazy over any fictional portrayal of our dear city.)

The chapter concludes: “On and on he flew, toward Boston, which is the capital of Massachusetts, and which is famous for its baked beans, its codfish, its tea parties, its Cabots, its Lowells, its Saltonstalls, and its Swan Boats.”

This was enough to send Oliver and Charlie into a frenzy. “Could we read the next chapter? Please!” Meanwhile, I had my own moment of realization. Cabot! We are developing a book on the Cabot family right now at Newbury Street Press. Lowell! We published The Descendants of Judge John Lowell of Newburyport, Massachusetts in 2011. Saltonstall! We published The Descendants of Dr. Nathaniel Saltonstall of Haverhill, Massachusetts in 2013. 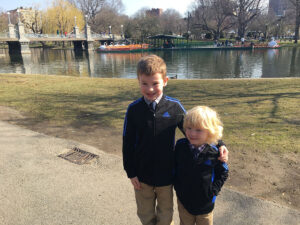 These surnames flew right by me in my youth, but now, at my place of employment, they are oh! so relevant. Instead of mere characters in a book of fiction, these are real families that we work with at American Ancestors daily. I was absolutely tickled.

“A lot of their prominence is based on their early settlement (Saltonstalls), their success in public life (Lowells), and their success in business (Cabots)–but, of course, all three were established and successful families boasting multiple public figures,” says Scott Steward, Editor-in-Chief at American Ancestors, editor of the forthcoming Cabot genealogy, co-author of Lowell, and author of Saltonstall.

Scott recalls that he once saw Leverett Saltonstall having lunch in the downtown Harvard Club in the 1970s. “My father pointed him out as a former Governor of and Senator from Massachusetts–it really felt like I was sitting in the presence of history.” Scott’s sentiment supports White’s inclusion of these Boston families—The Trumpet of the Swan was published in 1970.

“My father pointed him out as a former Governor of and Senator from Massachusetts–it really felt like I was sitting in the presence of history.”

This experience was so rewarding for me—I was able to share a favorite story of mine with my children; appreciate White’s prose in a new way; and witness the awesome interconnectivity between literature, history, and American Ancestors.

Have you reread a childhood story with your children or grandchildren and discovered something new? Share in the comments!

13 thoughts on “Famous for its Cabots”