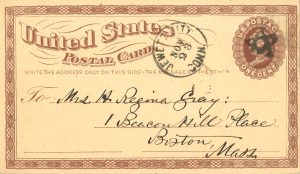 Thanks to a timely message alerting me to a collection of letters for sale at eBay, I recently acquired one side of the genealogical correspondence between Regina Shober Gray[1] and the Rev. Richard Manning Chipman, author of The Chipman Lineage (1872). Mrs. Gray, so expansive in some areas of her diary, is comparatively terse with regard to the beginning of the correspondence:

Boston, Friday, 2 October 1874: “…a week or so since, I wrote to Rev. Richard Manning Chipman about the discrepancy in the ‘Chipman Lineage.’ He there gives the name of John Howland’s wife as Elizabeth Tillie, who with her father & mother came over in the Mayflower; while the New Eng. Genea’l Register gives it as Elizabeth Carver, dau. of Gov. John Carver, also of the Mayflower company & first governor of the infant colony; and says her wedding was the 3 if not the 2d that took place in the Colony…”

Writing from Lisbon, Connecticut (P.O. Jewett City, Conn.), R. Manning Chipman replied “The ‘discrepancy’ to which you refer … is easily accounted for. The company at Plymouth were there arranged at first into families. Gov. Carver’s family included his wife Elizabeth & another person whose baptismal name was Elizabeth. Various circumstances combined to render it probable that said Howland’s wife was that Elizabeth who as well as said Howland pertained to Gov. Carver’s family. That assumption [one identifying Elizabeth Howland as Elizabeth Carver] stood for fact until Gov. Bradford’s MS. History of Plymouth, lost for three fourths of a century, was, about twenty-five years since, found & printed. That History contains the facts relative to both the assumed and the actual wife of said ‘Pilgrim’ John Howland.”[2]

Chipman continued, presumably with reference to Mrs. Gray’s stated reasons for writing him, that “It always interests me to find parents ascertaining their children’s ancestry which embraces lines other than are embraced in their own. In respect to Hon. William Gray’s[3] progenitors surnamed Gray, have you information extending beyond his father? The Salem antiquaries do not go farther, and Savage’s Geneal. Dictionary affords nothing… My mother (Elizabeth Gray) was included in that stock of Grays. What I have collected & arranged of them is accurate, though incomplete…”[4]

In early December, in answer to Chipman’s request for information on the Boston Gray family, Mrs. Gray “sent off my modern ‘Gray’ genealogies to Rev. R.M. Chipman…”[5] The better part of a year passed before Mrs. Gray’s next letter (“I have written to day to Fanny Stewart[6] – and Rev. R.M. Chipman”),[7] which elicited a lengthy screed[8] from Mr. Chipman. He first took three pages to apologize for his tardiness – his letter, dated 10 November 1875, was at least begun no more than six days after Mrs. Gray wrote – then noted that Mrs. Gray’s new information on the Gray family “will lead me to re-arrange a portion of my monogram [sic] of the Grays of Salem & its Vicinity, which purpose I proposed to do in connexion with preparation of the syllabus to be forwarded to you…

“If space allows I may add somewhat to the bare pedigree here following, in which the figures prefixed are of generations.

“3. Joseph Gray, eldest son; had four children, of which one, next below named, was prob[ably] the youngest.

Mr. Chipman was not quite sure that his depiction of the Gray line behind the Salem Grays was correct: “Many probabilities, some obvious, …will suggest themselves, [and] warrant the inference that William, A.G.’s father, is = William son of ‘3 Joseph,’ as of record… The matter must be assumed as satisfactorily standing on [the] social & personal relationship of A.G. with Salem and the fact of his father’s age tallying with the William son of Joseph, son of Joseph, son of ‘1 Robert [Gray]’ above presented.”

Chipman’s own line – one about which he felt more confident – passed through Benjamin, son of 2. Joseph and grandson of 1. Robert Gray. Benjamin’s son, John Gray of Provincetown , was the father of Rachel Gray (who married Simon Gordon), grandfather of James Gray (not Gordon), and great-grandfather of Elizabeth Gray (1788–1860), Mr. Chipman’s mother. Finally, in response to Mrs. Gray’s letter of mid-November 1875, Chipman sent a postcard emphasizing an obscure point in the correspondence: “Please note, as corroboratory, that A[braham] G[ray]’s eldest son bore the same pronomen as the next male ancestor (as by me assigned) of said A.G.”[10] – that is, that Mrs. Gray’s grandfather-in-law, William Gray, was named for his paternal grandfather.

All in all, this correspondence suggests the generosity of Victorian genealogists as well as some of the limitations both amateurs and professionals faced in 1874–75. While the Register, and the 1856 publication of Bradford’s History, provided useful contemporary information, both Mr. Chipman and Mrs. Gray were hobbled by lack of access to records (in some cases) less than a century old.

Within a generation, the published Salem vital records would answer some – if by no means all – of their questions about the earlier generations of the Gray family. In the meantime, Mrs. Gray maintained an extensive correspondence with her children’s kinsmen and those professional genealogists, like Chipman, who were writing about their common ancestry.

[9] A witness to Abraham Gray’s will, John Chipman, was “my father’s father, cousin-german to the wife of A.G.’s son William.” See also Note 3.