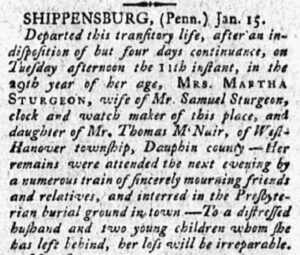 In my study of Sturgis family history, I have found many branches of Sturgis families besides “my” branch, which begins with Edward Sturgis of Charlestown (1635) and Yarmouth (1639.) There are Sturgis (or Sturges) families in Connecticut, Delaware, South Carolina, Virginia, Maryland, New York, and Pennsylvania.

I began looking into Pennsylvania Sturgis families because of Samuel Davis Sturgis, who was a West Point graduate and Brevet Major-General during the Civil War.[1] I am fairly sure that I am not a direct relation to the famous General, but I would like to learn more about his ancestry. I found that Samuel D. was born in Shippensburg, Pennsylvania, on 11 June 1822, the son of Mary Brandenburg (or Brandebury) and James Sturgis.[2] There is quite a bit of information available about Samuel D., but very little about his ancestry prior to his parents. I learned that James and Mary Sturgis moved with several of their children to Burlington, Iowa, where James died in 1855[3] and Mary in 1872.[4] James’s tombstone says “Born in Juniata County, Pa., 1785.” According to Wikipedia, Juniata County wasn’t formed until 1831,[5] and it was originally part of Mifflin County. A search for “Sturgis” in the 1790 census for Mifflin County returns no hits, but there is one hit for “William Sturgeon” with four males (one 16 and over) and six females.

In Shippensburg, Pennsylvania in the Civil War,[6] the claim is made that ”General Samuel David [sic] Sturgis was the grandson of Samuel Sturgis, a watchmaker whose shop was located on East King Street, between the Peoples National Bank and the Square. His father, James Sturgis, was a Shippensburg Justice of the Peace and was called ‘Squire Sturgis.'” Aha! Samuel D.’s grandfather! However, a search of Shippensburg census records prior to 1820 shows no Samuel Sturgis. But there are records of “Samuel Sturgeon” in 1810, 1820, and 1830. So, I decided to look into Samuel Sturgeon. In Kline’s Carlisle Weekly Gazette for 19 January 1803, I found the obituary of “Mrs. Martha Sturgeon, wife of Mr. Samuel Sturgeon, clock and watch maker of this place (Shippensburg).”

Is it pure coincidence that there are “Sturgeon” records that appear to match Sturgis people and places?

In a biography of General Sturgis in A Biographical Album of Prominent Pennsylvanians,[7] the assertion is made that “The progenitor of the family in this country was William Sturgis, who emigrated from County Armagh, Ireland, and settled in the Juniata valley about 1745.” A breakthrough? Maybe. In a biography of Elmore Y. Sturgis,[8] another Civil War veteran, I learned that he was a “son of Thomas and Elizabeth (Brasier) Sturgis, the former of whom was a native of county Armagh, Ireland” and grandson of “Rev. William Sturgis who likewise was a native of the Emerald Isle, whence he emigrated with his family when Thomas was a boy of ten years. The family took up their abode at Shippensburg, Pennsylvania.”

In a biography of another Civil War vet., John E. Sturgis,[9] I found that “His father, Thomas Sturgis, was born near Lough Neagh, county Armagh, Ireland, December 23, 1802, and was a son of Rev. William and Elizabeth (Gratz) Sturgis.” “… They removed to Pennsylvania and settled at Shippensburg…” Maybe the connection began in Ulster?

So I commissioned the Ulster Historical Foundation to investigate Rev. William Sturgis and his family, noting that they were in Ulster near Lough Neagh in the early 1800s. Their research found no one of the name “Sturgis.” But they did find the family of William and Elizabeth “Sturgeon,” with baptisms of children Joseph, Mary, Amelia, Martha, and Sarah, all prior to 1810. That Sturgeon family lived in the townland of Drumnahunshin, which is a few miles south of Lough Neagh in County Armagh.[10]

As an Agatha Christie character once said: ”I’ve often noticed that when coincidences start happening they go on happening in the most extraordinary way.”[11] It appears that if Sturgeons didn’t become Sturgises, they certainly lived in very close proximity to one another.