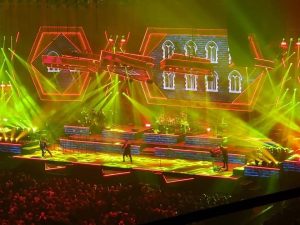 I recently attended my first concert ever, with my husband. Whenever I listen to the Trans-Siberian Orchestra’s music, it puts me into a holiday mood. During the concert, I learned that founder Paul O’Neill passed away two years ago. I was curious about his roots and wanted to see what I could find. I learned from his obituary that he had grandparents from Ireland. Through a variety of interviews published online, I was able to start tracing his tree. I first started looking into his maternal side.

Paul’s maternal grandparents were Andrew Joseph Moore and Julia P. Merryman. Both were born in Ireland. The couple married in South Dublin on 13 June 1924,[1] a few short years after the Irish War of Independence.

Andrew was born circa 1897 in Dublin. He was a civil servant, working as a clerk for the railway. They had two children in Ireland, James (b. 1925) and Edward (b. 1928). Andrew is found arriving in New York on the 25 April 1927 ship manifest for the S.S. Baltic; he was visiting his brother-in-law, Thomas Shortt, who lived in New Rochelle, New York. Mrs. Julia Moore was still living in Dublin with her son James.[2]

Andrew and family immigrated to America soon thereafter and settled in Queens, New York. The family had four more children (Patricia, Joan, Veronica,[3] and Gregory). By 1940, Andrew was the head porter at a theater and became a naturalized citizen.[4] Andrew died in Queens in 1947 and was buried in Calvary Cemetery. His death certificate lists his parents as Andrew Moore and Bridget Keyes.[5]

Andrew Moore and Bridget Kayes married 24 August 1884 at St. Margaret’s Church in Finglas (a suburb of Dublin).[6] In addition to Andrew Jr., Andrew and Bridget had a daughter, Margaret. She was born 21 October 1899,[7] and married Thomas Shortt in 1926 in South Dublin.[8] This is the same man already seen in Andrew J. Moore’s listing on the Baltic’s manifest.

I wonder if [Paul O’Neill’s] grandparents, Andrew and Julia, talked about the bustling city life of Dublin in their stories to their grandchildren.

Turning our attention to Mary Anne Foran, we know that she was born in Dublin to James Foran about 1865. I found a baptism record on 9 June 1863 for a Maria Anna Foran at St. Catherine’s Church (the same church in which her parents were married). Her parents were listed as Jacobi Foran and Juliae Birmingham.[13] I then found a marriage record between Jacobus Foran and Julia Birmingham. They married at St. Mary’s Church in Dublin City on 4 July 1858. Jacob’s parents are listed as Jacobi and Maria Foran.[14]

Paul’s maternal line has deep Irish roots in the heart of Dublin. I wonder if his grandparents, Andrew and Julia, talked about the bustling city life of Dublin in their stories to their grandchildren. Perhaps his grandfather spoke of the “old city bar” that was featured in Paul’s rock opera “Christmas Eve and Other Stories.” Let’s raise a glass of Guinness to Paul O’Neill this holiday season! Happy holidays everyone!