As I continue to map out the connections of the Livingston family of Callendar, Stirlingshire, I am struck by how comparatively closely related the sixteenth-century Livingston family was to two of the husbands of Mary, Queen of Scots. A third connection, rather less salubrious, was to some of the murderers of David Rizzio, or Riccio, which occurred in the presence of the Queen while pregnant with the future King James VI. (Rizzio was accused by his assailants of being the child’s father.)

Mary Stewart, Queen of Scotland, succeeded her father as an infant, and her marriage – to the future King of France, François of Valois – was arranged during their childhood. Had King François II survived to have children with his wife, uniting France with Scotland, Europe’s history would have been quite different. Widowed before she was eighteen, the Queen of France and Scotland returned to a home she scarcely knew; the prizes associated with marrying her, or controlling her person, would remain dangerously attractive up to the moment of her death in 1587.[1]

The turbulent Scottish nobility sought these prizes, and in 1565 she married Henry Stewart (or Stuart), Lord Darnley – the son of Mary’s father’s half-sister, and so her first cousin of the half-blood. Darnley, a grandson of Margaret Tudor, Queen Dowager of Scotland and then Countess of Angus, was thus a pretender to the English throne; such a match, entered into initially with some amount of affection on both sides, buttressed Mary’s claims in England, and would be a factor in the pretentions of Darnley and Mary’s son, the future King James VI (and I).[2]

The queen’s fondness for her Italian secretary enraged the Presbyterian Scots who surrounded them at court. Lord Darnley, now the King Consort of Scotland, participated in the plot to murder Rizzio; the brutal act, in Mary’s presence, presumably killed any positive feelings between the pair. Among the other participants in the Riccio plot were Patrick Ruthven, 3rd Lord Ruthven, whose first wife was Darnley’s aunt (of the half-blood), and his son the Master of Ruthven, William, later 1st Earl of Gowrie.[3] Like Darnley, the Ruthvens were cousins of the Lords Livingston, in this case via the Hepburn family[4] – an important detail. 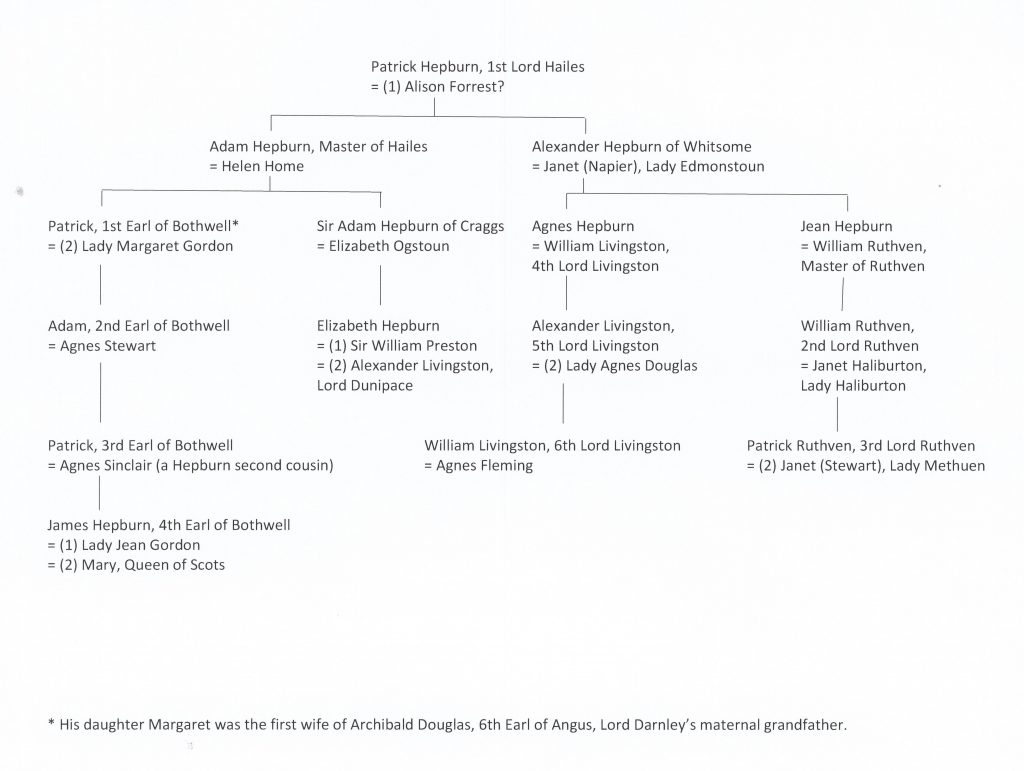 A few months after the birth of the couple’s heir, Darnley was assassinated, and suspicion reliably fell upon the queen. She had a new champion, James Hepburn, 4th Earl of Bothwell, who was accused of Darnley’s murder and who, in an interesting turn of events, abducted the queen and married her. Was there coercion and force, or was the whole affair consensual? In any event, it was also brief, and the Bothwell connection led to an uprising that, in turn, led to Mary’s abdication. She fled to England, where her cousin – Queen Elizabeth I, whom Mary would, in the likely course of events, succeed – put the inconvenient Mary in prison (and, later, to death).[5]

So how did the Livingstons fit in? The 5th Lord Livingston had been the child Queen’s guardian between 1545 and 1547, and his son the 6th Lord “was in attendance on the Queen on the night of Riccio’s murder, his brother-in-law Arthur Erskine being the captain of the guard.” Later, in Queen Mary’s time of tribulation, Livingston “fought on her side at the battle of Langside, and was one of the three Lords who led her away when the battle was seen to be lost, and escorted her across the Border.” Lord and Lady Livingston remained adherents once Mary was in England, moving with her from Bolton to Tutbury, and later to Chatsworth and Sheffield.[6]

In a period where affinity mattered – ties of blood warring with claims of friendship – people changed sides in an endless round of musical chairs. Access to power meant being in the room with the powerful – and so the Livingstons were, along with their cousins, in ceaseless orbit around the monarch.

[4] There is some dispute about whether the Master of Ruthven’s first wife (Catherine Gray) or second wife (Jean Hepburn, also called “of Riccarton”) was the 2nd Lord Ruthven’s mother. Still, there was evidently a close connection between the Ruthvens and the Livingstons in this period. Paul, The Scots Peerage, 4: 259, 9: 41.

1 thought on “In ceaseless orbit”