A leaf hint on Ancestry can often lead one to additional records of the person you are researching. Other times, it might lead to interesting “near” matches, while occasionally it may lead you down an entertaining, but wild goose chase of a false match. This is one such recent example.

I was researching the male line descendants of Benjamin Pierce (1757–1839), who was the eleventh governor of New Hampshire and father of 14th U.S. President Franklin Pierce.  Some of Benjamin’s descendants are outlined in Burke’s Presidential Families of the United States of America and Memorials of the Massachusetts Society of the Cincinnati. An officer during the Revolutionary War, Benjamin Pierce was an Original Member of the Society of the Cincinnati, and three of his sons were members. As the society had a policy of succession similar to primogeniture, membership would pass to a member’s eldest male heir. Benjamin Pierce was succeeded by his eldest son Benjamin Kendrick Pierce (1788–1850), whose sons predeceased him. Franklin Pierce succeeded his elder brother in 1852 (soon before he was elected President), and as Franklin’s sons also predeceased him, membership was passed in 1873 to Franklin’s youngest brother Henry Dearborn Pierce (1812–1882).

Henry Dearborn Peirce had two sons Kirk Dearborn Pierce (1846–1928), who succeeded his father in the Society of the Cincinnati, and a second son, Frank Hawthorne Pierce, born in Hillsboro, New Hampshire, on 10 January 1848. The latter genealogy had this second son (and nephew to the president), as “n.f.r” (no further record). I decided to see if I could find anything on him. This is where things started to get interesting. I found several hints suggesting he was the Frank H. Pierce enumerated in Rehoboth, Massachusetts, in 1880, 1900, and 1910. Family information on a Find A Grave entry made it appear that I found the right guy (I’m sure this information will be changed soon enough as a result of this post, as some of my other ones have): 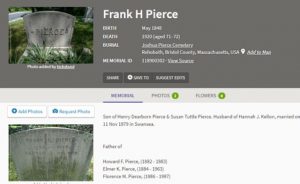 What did he do?

I researched the surviving son Elmer Kelton Pierce (1884–1963) (who, if his father Frank’s parentage was correct, would be the only male Pierce of his generation descended from the President’s father). While I learned he married, had a son, and has present day Pierce descendants, I was intrigued by his later census entries. In 1930 he was enumerated in Boston at the Massachusetts State Prison, and in 1940 in Norfolk, Massachusetts, at the State Prison Colony. What did he do?

Newspapers.com nicely fill in this gap: 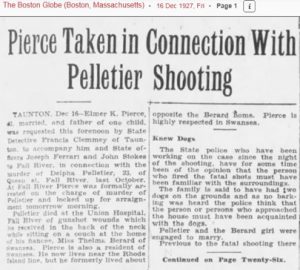 Elmer K. Pierce pled guilty to second degree murder and was sentenced to life in prison. He was later given a Christmas Pardon in 1949.[1] An article where he requested a pardon appeared 15 years earlier.[2] The curious item I noticed in this article was “Others who spoke in favor of a pardon included Herbert W. Pierce, Dighton farmer, cousin of the prisoner . . .”

What was going on here?

How was the Herbert W. Pierce related to Elmer? The above genealogies had shown no other male line descendants of Governor Benjamin Pierce after the brothers Kirk Dearborn Pierce and Frank Hawthorne Pierce, the latter purportedly the father of this Elmer Kelton Pierce. Benjamin6 Pierce (Benjamin5, Stephen4–3, Thomas2–1) descended from Thomas Pierce (died 1666) of Charlestown and Woburn, Massachusetts (also my own ancestor). However, this Dighton man, Herbert Wilson9 Pierce (Wilson Dorr8, Joshua7–5, Mial4, Ephraim3–2, Michael1) descended from Michael Pierce (died 1676) of Hingham and Scituate, Massachusetts! What was going on here? Were Elmer and Herbert Pierce really cousins?

I eventually found the death certificate of the real Frank Hawthorne Pierce in the Bronx, New York, on 31 December 1908, giving the correct parents, and also that he died single. 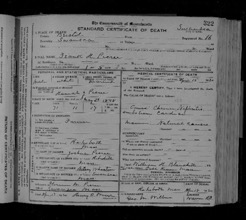 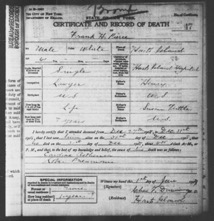 This false leaf hint led me to briefly think Franklin Pierce had a grandnephew sentenced to life in prison for murder. Ultimately I found the records that cleared up the confusion and determined where Franklin’s nephew died unmarried. The stories about Franklin’s “non-relative” were still interesting nonetheless.